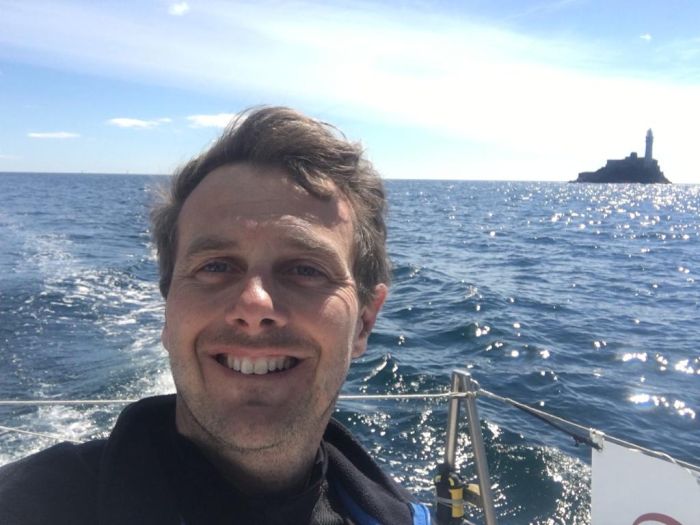 Though yesterday proved to be a bracing day, with a SE’ly breeze of between 25 and 35 knots on short seas, the pace of the 17 solo sailors in the Bermudes 1000 Race Douarnenez – Brest has slowed considerably since last night. The upshot of that is numerous manœuvres required by one and all, as well as an accordion effect in terms of the ranking.

In this way, current leader Sébastien Simon has seen his lead halved in the last 24 hours. Right now, the skipper of ARKEA PAPREC is ‘only’ 18 miles ahead of his closest pursuer compared with yesterday’s lead of up to 50 miles. Furthermore, this separation is set to yoyo constantly between here and the Azores waypoint. The reason for this is that the angle of approach for this virtual mark is not looking easy with another transition phase to be negotiated in the coming hours and what is still a very shifty breeze.

“Having spent 24 hours in a fairly strong breeze, the wind eased over the course of the night. In a short space of time, we’ve gone from 2 reefs in the mainsail – staysail and full main – genoa via the J2. There’s no need to tell you that it wasn’t a great night for rest with this festival of manœuvres!” commented Stéphane Le Diraison (Time for Oceans) at midday, still making headway upwind in a S’ly breeze of around fifteen knots, fluctuating in both strength and direction.

It’s the same scenario for Clément Giraud (Envol by Fortil). “Last night we had a big zone of calms. No air at all. At one point, I woke up and no longer knew where the wind was coming from. I did a full 360° turn but right now, the wind is becoming fresher again and will continue to increase throughout the afternoon”, explains the skipper from Toulon who, like his fellow sailors, is having to keep his eyes wide open and constantly adapt to the variations in breeze.

“You have to keep active to stay on top of the various trimming set-ups and above all you have to be poised to redo the opposite manœuvre”, explains Maxime Sorel (V and B – Sailing Together), who is sailing a fantastic race in the small group formed by Yannick Bestaven (Maître Coq), Giancarlo Pedote (Prysmian), Fabrice Amedeo (Newrest – Art & Fenêtres) and Damien Seguin (Groupe APICIL).
Stay focused on your objectives

All of the latter are currently grouped within ten miles of one another, belting along to catch up with the top trio still made up of Sébastien Simon (ARKEA PAPREC), Boris Herrmann (Malizia – Yacht Club de Monaco) and Sam Davies (Initiatives Cœur), they too happy to rediscover some slightly more comfortable conditions today.

“When you’re going as fast as we were yesterday, it’s hard to live, to brush your teeth and to eat. Life is on hold when it’s so violent!” indicated the British sailor.

It’s a similar sentiment for her compatriot, Pip Hare, whose boat, a Roland design built in 1999, has logically been put to the test in the strong breeze. “The weather’s been harsh and it’s the first time in a long time that Superbigou has covered so many kilometres. That’s doubtless why I’ve found myself facing a gooseneck issue. I’m disappointed, naturally, but I’m also determined to resolve the problem. I’m staying focused on my objective, which is to cross the finish line in Brest, whatever my position”, commented the sailor/journalist, who is now lying in 16th place, 200 miles shy of the leader.

ETA of midday tomorrow at the Azores mark

Two hundred miles is roughly what Sébastien Simon has left to cover before he rounds the next course mark. If we rely on the latest routing, it’s at midday tomorrow that the leader of the pack will likely negotiate the waypoint situated to the North of the Azores archipelago.

However, contrary to appearances, it’s not going to be as simple a route as all that. Indeed, not only will the skipper from Les Sables d’Olonne have to deal with a wind shift to the West in the coming hours before he switches onto a direct course towards this compulsory passage point, but he’ll probably also have to cope with a yoyoing breeze for quite a while as it strengthens and weakens. Within this context, it’s distinctly possible that the deficits between the competitors will also yoyo in and out too.

The situation is certainly getting on the nerves of some of the sailors, galvanising others into action, as well as guaranteeing a fair amount of jockeying for position between now and the finish in Brest, which we can estimate today to be around midday on Friday for the front runners.