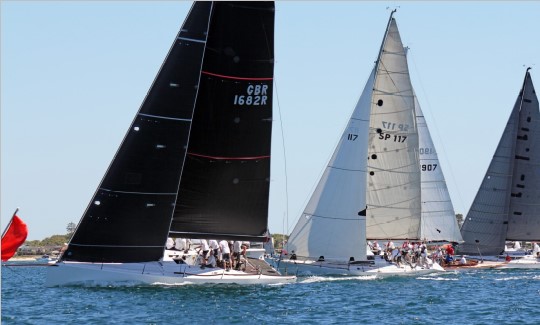 The Cockburn Sound Regatta is a four day event held between Boxing Day and New Year’s Eve on the beautiful and protected waters of Mangles Bay off Rockingham. Conditions were light and very hot for the whole regatta although the seabreeze provided some welcome relief on occasion.

The Kwinana Industries Council Race to Rockingham is the feeder race for any metro-based yachts and this year 16 faced the starters gun to make the 14 nautical mile trip down to join the rest of the fleet. Several boats chose to make the trip early to avoid the forecast strong winds and strong they were, gusting over 30 knots with a nasty swell kicking up in the Sound. Ray Martin’s Farrier F85SR, Beatrix took line honours initially but was forced to retire, having sailed the wrong course. The race was won on adjusted time by Bob Von Felton’s Sunfast 3200, Ristretto.

Fifty-six boats competed in the regatta this year which is up on previous years, and several new boats made an appearance along with the usual culprits. As usual, sailing consistently and making as few mistakes as possible proved to be just as important as it always has been when racing.

The Sydney Hobart’s loss was our gain with Anthony Kirke bringing down his new Botin & Carkeek GP42, Enterprise NG, to try out our waters. Although this was her first outing, she proved to be a class above the rest, taking out the prize for Division 1. Second place went to Salacia II skippered by Ross Norgard.

Division 2 went right down to the wire with only 2 points separating the first five boats. In the end the locals prevailed with Steve Morris’ Ross 780 Freedom, just pipping Will Grauag’s Spider 28, Venomous. Igawa, Panache II and Zubenubi were the other close contenders.

The Sports Boats provided probably the most interesting and close match racing with last year’s standout performer Tiger, skippered by Gavin Taylor, being pushed back into 4th place. Brett Fannon’s Leech 750 Retuned proved to be too fast for the whole fleet and took out the win by 2 points from the local Elliott 7, Need for Speed, skippered by Jacob Birch. The numbers for this fleet are growing year by year and we are assured that, as word gets around, we’ll see even more of the making the trip south. The waters are just perfect for the Sports Boats to strut their stuff.

The overall Regatta Champion is determined by a formula taking into account a boat’s gross point score and the sum of the total numbers of boats starting in each race in each Division.  It was very close between Sand Crabs Disco, Retuned and Southern Star but in the end, it was Southern Star who prevailed by the narrowest of margins, to take out the prize.

In Division 3 some of the courses turned into a number of reaches which suited the longer waterlines of the Spacesailor 27s, King Canute and Trailblazer. Matt Rose from South of Perth won from local Barry Dymond. Lokman, Ally Mounsey, was an unlucky third. Bruce Uren’s Spacesailer 22, Wildfire, sailed consistently well but wasn’t favoured by the conditions.

Graeme Martin’s Gibsea 402, Sand Crabs Disco, was fastest early on in the JAM 2 fleet but had to contend with a rapidly improving John Holder sailing the borrowed Farr 11.4, Crazy Horse. Sand Crabs Disco survived a starting line protest to prevail by just one point from the fast finishing galloper. Steve and Jane Laws’ Lotus 10.6 Ambience, was the unlucky boat in this fleet, suffering gear damage and being forced out of the regatta. Phil Somerville’s consistent S&S34 won on IRC from Sand Crabs Disco and Crazy Horse.

The local skippers Dave Reid and Keith Thompson sailed their boats, Naw the Noo, and Brio to first and second in JAM 3. The little Swarbrick 22’ also won the prize for best dressed crew. Keith’s S80 was generally fastest in this Division but was pipped on occasion by the M27, Vaquero from Mandurah.

Only one multihull made the trip down this year so Ray Martin’s Farrier, Beatrix, joined with the new Premier Cruising Multihull Division to help make up the numbers. Unfortunately Trevor Lord, the skipper of another visiting boat fell down the hatch of Genevieve and was unable to join the regatta. Although the boats were far apart in terms of speed, the adjusted times were relatively close. The Crowther Catana, Quoll II, owned and skippered by Tim Hawkins, took out first place from John Percy’s Grainger 1220, The Endless Dream, by just one point overall. Although the fleet was small, there was no doubting the commitment of the crew.