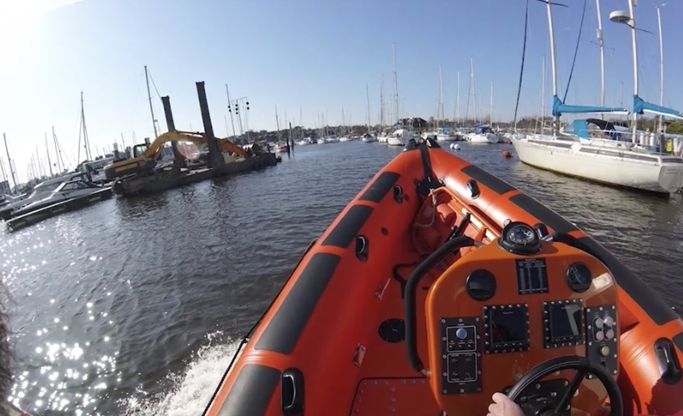 Lymington’s Atlantic 85 inshore lifeboat David Bradley, launched to assist a man in his 60s who was injured and had become trapped on his vessel. The weather conditions were good and there was a fresh NE breeze force 5.

The yacht was moored to the north of Berthon in Lymington River and the lifeboat was launched quickly given the nature of the call. It was understood the casualty was below deck and therefore it was important to identify the vessel as soon as possible.

Further information came through to the crew to help identify the yacht and they were able to locate it on one of the moorings. It was essential they located the yachtsman quickly who was alone on the yacht at the time of the accident.

The lifeboat moored alongside the vessel and three crew members went onboard to try and locate the casualty. They found the casualty wedged upside down in the lazarette (a storage locker used for gear and equipment); he had fallen into it whilst working on this yacht.

The lifeboat crew members assessed the man to ensure he was in a stable condition before trying to move him. It took the three lifeboat members to support and lift him onto the deck of the yacht. Care was administered on the yacht and once stable he was transferred to the lifeboat and then into care of the ambulance crew who were waiting on Lymington Town Quay.

Helm Phil Baker said: ‘the casualty was very lucky and he did the right thing by having a phone on his person, so he was able to contact HM Coastguard for help. It was a very unique shout which I haven’t seen in my 30 years of service.’

Later the casualty contacted members of the lifeboat crew. He said: ‘thank you to the crew and lifeboat for getting out of a difficult situation very professionally. I don’t think I would have survived much longer and will be forever in your debt.’

The lifeboat returned to the station and was ready for service again at 4.20pm.