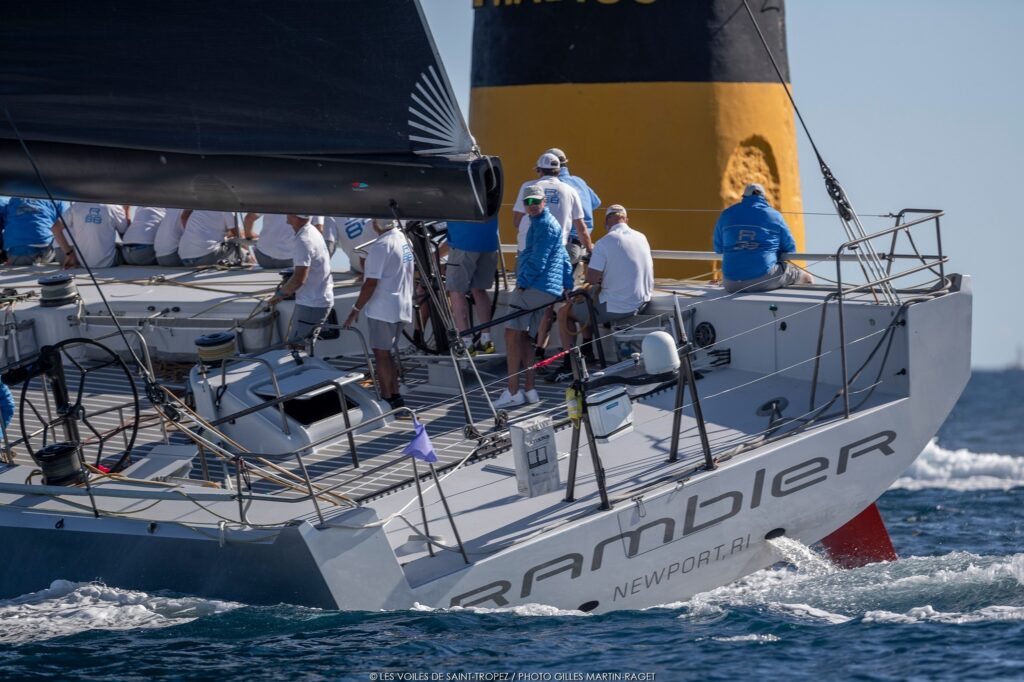 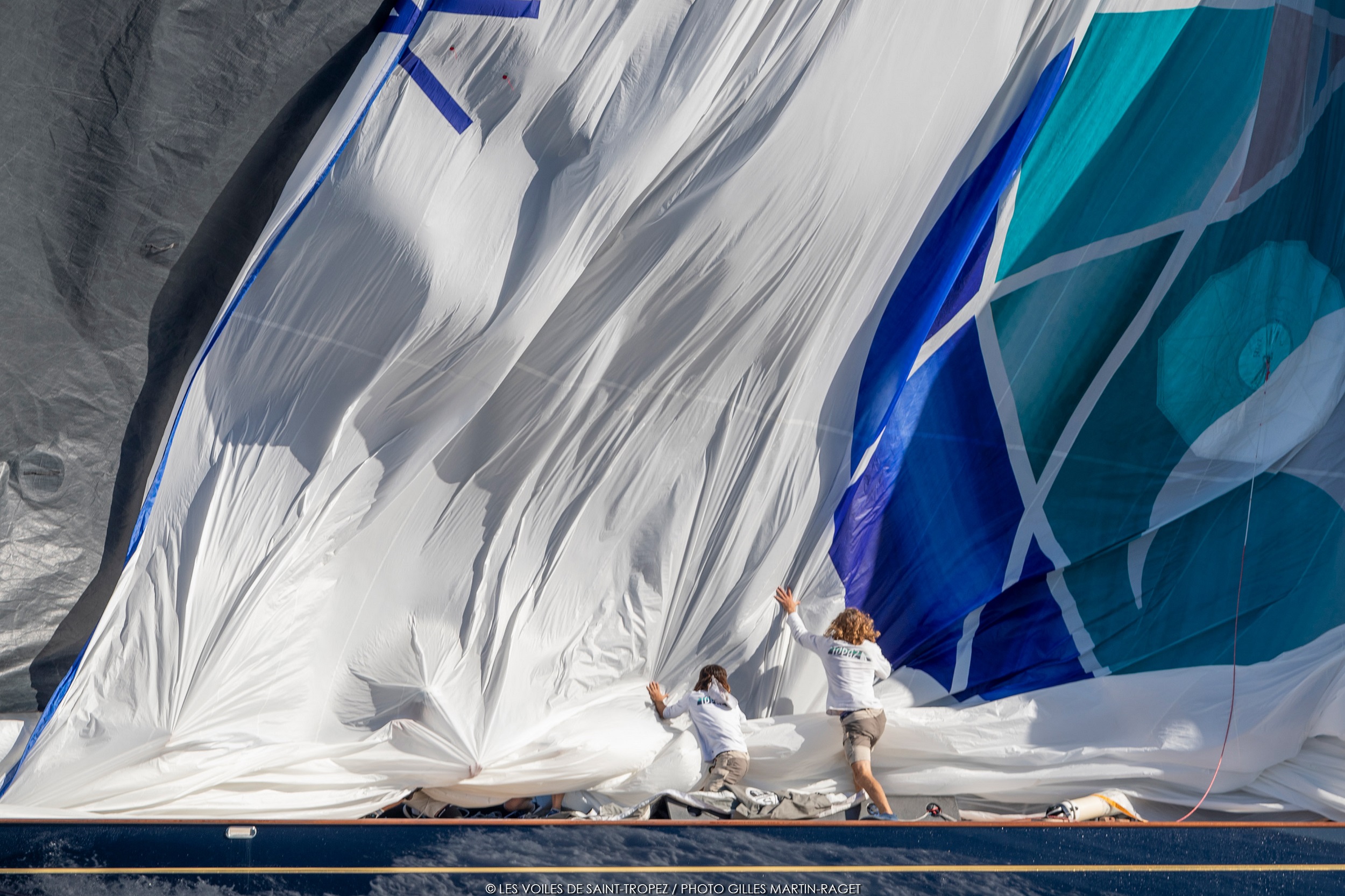 After Wednesday was blown out due to excess wind, day three of racing for the maxis in week two of Les Voiles de Saint-Tropez nearly didn’t occur as come start time the wind remained elusive.

Fortunately at around 1330, the wind flicked into the south enabling the race committee from the Société Nautique de Saint-Tropez and the event’s co-organiser, the International Maxi Association (IMA), to get proceedings under way. The well-conceived course saw the boats sent out to marks due east of Pampelonne Beach for a pleasant afternoon’s racing held in 12-14 knots and flat water.

George David’s Rambler 88 is a well-known veteran of the high seas and while her owner and crew enjoy competing in inshore events such as Les Voiles de Saint-Tropez, her preferred race course is offshore where she has scored line honours in most of the major events in the calendar. Thus, it comes as some surprise that the long-legged Juan K design should be leading IRC 1 this week, albeit tied on points with Sir Lindsay Owen-Jones Wallycento Magic Carpet 3.

“Can you believe it? George [David] is pleased. He said we did a good job today. He’s pretty excited. It was all good,” confided tactician Brad Butterworth.  “The start was a big deal. You had to get your nose out. There was a bit of reaching and then it was a bit cracked.

“It suited the big boats – the rich got richer. We got ahead with Comanche and we tried to stick with them as much as we could. [Magic] Carpet [Cubed] had a bit of a shocker, which worked for us.”

The Rambler 88 crew were particularly on best behavior as sailing with them today was Alinghi Team Principal, Ernesto Bertarelli, with whom many, including Butterworth, won and then defended the America’s Cup in 2003 and 2007.

After two races it remains close. Both Rambler 88 and Magic Carpet Cubed have scored a 2 and 3, just one point astern are Claus Peter Offen’s Wally 100 Y3K, winner of todays’ race. And Wendy Schmidt’s brand new Botin 85 Deep Blue, won race one on Tuesday.

Forging their way through the fleet today to claim line honours was the mighty Verdier-VPLP 100 Comanche. “There was a lot more breeze than we expected, which was good for us as was the course configuration with more reachy angles that suited us pretty well,” explained racing skipper Mitch Booth, the two time Tornado Olympic medallist.

“We had a great day sitting on 18 knots. The owner’s son was driving all day and he loved it. We are still at a stage where we’re learning how to sail it and get ready for our line honours races, like the Rolex Middle Sea Race which is coming up next.”

There was some drama on board when a crew fell off the bow. However swift action by the crew meant they were able to recover him before he passed the transom. “If we’d have been on a 60 footer, he would have passed the back of the boat,” quipped Booth.

Across the other four IRC classes, the leaderboard is much more clear cut – in each the leader has scored two bullets, with the exception of IRC4 where only one race has been officially completed.

In his regular style, Terry Hui’s Wally 77 Lyra is ahead in IRC 3B with the Maarten 72 Aragon, Jean-Philippe Blanpain’s Mills Vismara 62 Leaps & Bounds 2 and 2020 class winner, Philippe Ligier’s Wally 80 Ryokan 2, all tied on eight points.

In the IRC 2 maxi and supermaxi class, it is not the usual J Class 1-2 only because Velsheda retired on Tuesday’s first race with sail damage. However after today’s second place, Ronald de Waal’s supremely elegant yacht has recovered to third overall behind the immaculate 37m Dubois-designed Silvertip. Meanwhile out in front and making amends for their defeat last month at the Maxi Yacht Rolex Cup is Topaz, the longest yacht competing this week.

Topaz’s skipper Peter Holmberg, himself a former Alinghi helmsman, said of their race today: “We managed to get a better start than them [Velsheda]. It is a bit tricky to get off the start line – a reach, which is always unusual, but we came out with our boat in one piece, bow ahead of them.

“We took advantage of that and pushed them back a bit and there weren’t many passing lanes because it was a reach, so the boat ahead benefitted which helped us. On the long downwind, we did well as that is where we have an edge on them, and at the end of that we had enough of a lead to protect on the upwind.

“Francesco [de Angelis – tactician] connected the shifts and put us in the right place versus them. Smooth water helped us a little bit. We could pick the sides of the shifts and that was enough for us to hold on to our lead.”

It was a good day for yet another ex-Alinghi crew – in the fact the man who has won more America’s Cups than anyone else in history – Murray Jones, who has six victories to his name. Calling tactics on board Sir Peter Ogden’s 77ft long former Maxi 72 Jethou, the Kiwi legend said of today’s race which they won: “The forecast was pretty light and when there was no breeze from mid-morning on and honestly we started thinking it wouldn’t happen.”

However the wind filled in beautifully. Jones continued: “We started on a tight reach, with cracked sheets. We got off the start well and managed to just roll Vesper after four or five minutes. Once we were in front we could stretch away, and give them gas.

“We had an on the wind leg and then a run, which was tricky for us, but we caught up the two Js and it was quite tricky trying to get through their lee, but we did a good job. Then we had a nice long beat and a Code Zero for 10 minutes. It was good race. The committee nailed the start time just right – they couldn’t have gone any earlier.”

Racing will hopefully continue tomorrow but this will depend on the wind. As Peter Holmberg explains: “The Mistral is either side of side [in Saint-Tropez] and will be fighting – it could go either way.”

For the full results, see: http://www.lesvoilesdesaint-tropez.fr/regates/resultats-vdst/#tab-id-1