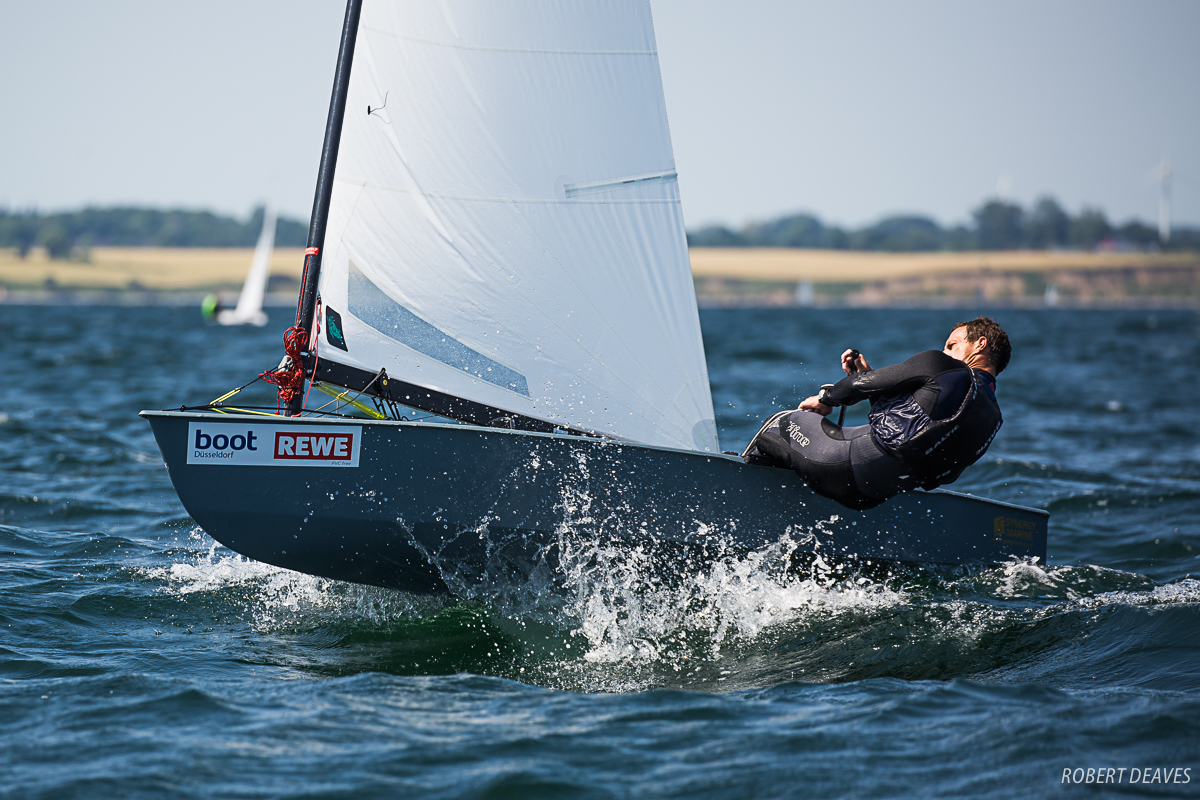 After an epic second day at the 2019 OK Dinghy European Championship at Kieler Woche, Fredrik Lööf, from Sweden, extends his lead with a 2-1-1, while Jan Kurfeld, from Germany is six points back in second. Valerian Lebrun, from France, jumps to third after a great performance including winning the first race of the day.

Kiel delivered in spades on the second day of the European Championship, spades of wind, warm sunshine, more sparkling water, and great competition. It was a great day to be on the water with a stable 10-15 knots all day, nice waves, and slick race management from Kieler Woche. The 91-boat fleet sailed three more races to bring the championship to the half way stage.

Race 3 belonged to Valerian Lebrun, emerging through the middle up the first beat to round ahead and build a comfortable lead on the reaches. Lööf was third at the top, and soon into second, but couldn’t catch Lebrun. Kurfeld was in third by the second top mark and held that to the finish.

Lööf led the next race at each and every mark, with Lebrun pushing him hard throughout. On the final upwind, Lebrun closed up for a close battle to the line. At one point he almost looked to have the advantage, but Lööf tacked to cover and they crossed a few boatlengths apart. Thomas Hansson-Mild, from Sweden, crossed in third after rounding the first mark in the leading group.

With weary limbs the fleet began Race 5 in similar conditions. The perfect conditions made it very physically tough as well as tactically challenging with a strong current at the top mark catching out the unwary – and even those who should know better. De Vries finally managed to lead round the top mark, but also hit it for the third time to allow Lööf into the lead. De Vries chased him hard but couldn’t match Lööf who went on to claim his third victory from five races. Kurfeld had another great race with a third.

“It was a nice day with a beautiful breeze,” said Lööf. “Really quite hard and quite challenging, left side and right side, but still shifts. Interesting sailing.”

“I had a good day with a 2-1-1, but Jan Kurfeld, the new French guy [Lebrun], and Stefan de Vries were pushing me hard. Also Thomas [Hansson-Mild] was up there at times, so it was good racing.”

“The depth in the OK class is getting better and better and it is really good sailing, and I just really enjoy it”

For De Vries, in fifth, a former Finn sailor and more recently an O-Jolle sailor, it is his first major championship in the class. “It’s basically about learning still and it’s getting better and better,” he said. “The sailing today was perfect, with perfect conditions and I am trying to catch up fast so I can play with the guys.”

“It’s a good level and people know what they are doing. It’s good fun and a good challenge. So I hope I can be there soon enough.”

Why did he move into the class? “I saw the amount of ex-Finn guys that jumped into the OK and I was looking for a competitive class. This seemed to be the best option.”