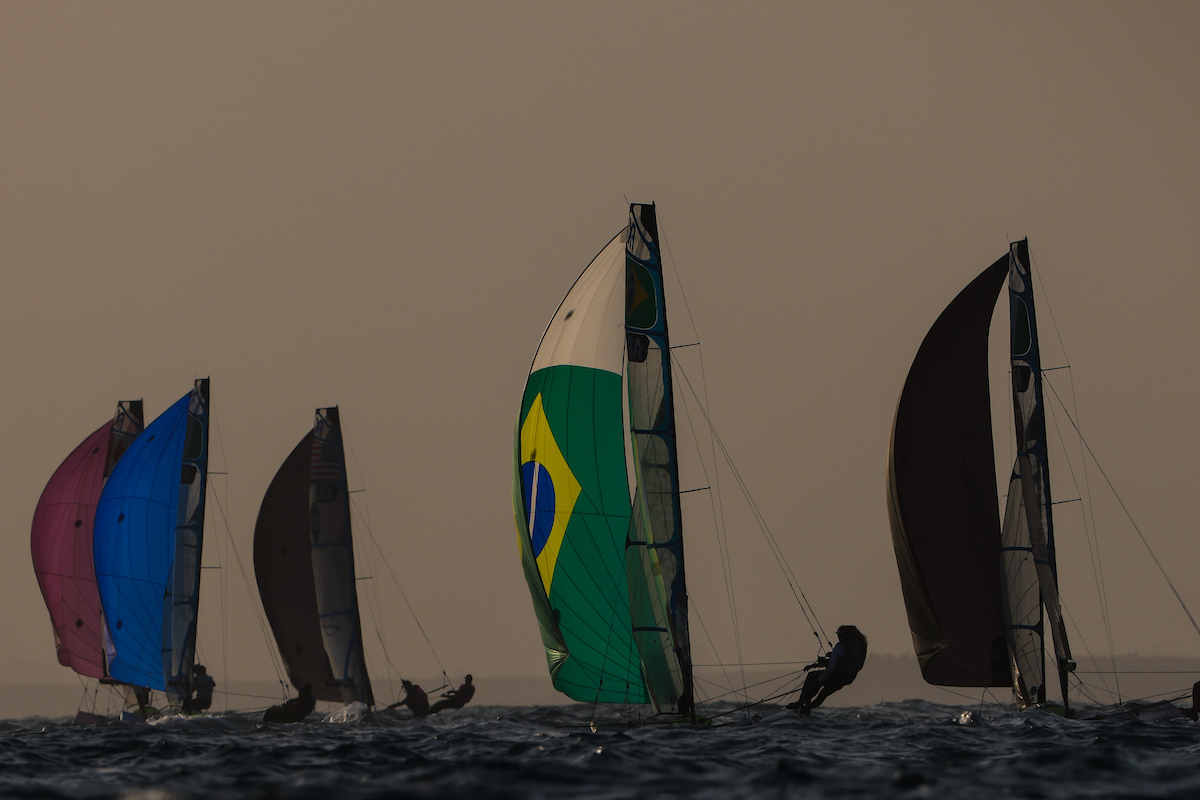 Musab Al Hadi with Waleed Al Kindi (OMA) moved into 25th place and qualified for gold fleet in a first for Oman at a 49er World Championship.

The pair have been sailing 49er for almost a decade, and became quite emotional upon realising their effort had secured them this milestone.

The achievement was even sweeter to occur on Oman National Day, a celebration of the founding of modern Oman on the Sultan’s birthday. Considering it was Sultan Qaboos that drove the formation of Oman Sail, an effort to rekindle the Omani spirit of seamanship, it was as if the Sultan was looking down from overhead in the final race of qualifying.

The Omani pair were emotional after being told on shore. “Oh really? First gold fleet? Oh finally!” said Al Hadi. Laughing and shaking his head he raised his hands to the sky and said, “First time in history.”

Al Hadi and Al Kindi were aiming at Tokyo qualification, but only managed a third place finish at the Asian qualifier in 2021.

At the front of the 49er fleet, Bart Labriex with Lars wan de Werken (NED) had a solid day of all top fives to move into the lead. They are chased by a pair of German boats.

American’s Ian Barrows and Hans Henken managed to win the final two races of yellow fleet and have moved up the standings nicely and now sit in fifth place.

Australians Otto Henry and Miles Davey have dropped back from first place and are now coming sixth overall.

Day four marks the beginning of gold fleet, where the top 25 49er teams will race off for the championship. Gold fleet racing is likely to make a big impact on the overall results due to the larger number of boats in the fleet, and the higher quality.

Overall leaders Helene Naess and Marie Ronningen (NOR) expressed frustration at how they struggled to hold lanes during the races, despite sailing well enough to move into the lead.

“Every time we would tack into a lane we thought ‘this is the one’,” said Marie. “Only then we’d lose it due to an isolated shift or puff that wasn’t hitting anyone.”

“We won a race today,” said Antonia Lewin-Lafrance (CAN). “But don’t ask about the rest of the day.” They scored a 12, 8 to finish out, maintaining a sixth overall after their third-place finish at the 2021 European Championship.

“We had a hard time today, we practiced a lot in the light winds but not so much when the breeze is up and it showed today,” commented Elize de Ruyter (NED), who moved down to second overall.

If that is how the race winners are talking about the day, you can imagine how those at the back are feeling. It was the kind of racing where every position was hard fought, every position loss hard felt. Despite being the windiest day of the regatta so far, there was a swell and chop that added further complication.

At the halfway point of the regatta four teams are within four points at the top, and anyone in the top nine could realistically dream of winning.

Gianluigi Ugolini and Maria Giubelei of Italy closed in on the Nacra 17 podium after the Italian team posted the best scores of the day, the young crew negotiating the first ocean swell of the regatta with great downwind technique. Results of 3,3,1 move them into fourth, just one point behind fellow Italians Vittorio Bissaro and Maelle Frascari.

Halfway through the regatta it remains tight at the top, and like in the FX fleet, just four points are separating the top four crews.

Moving into first place overall are the experienced German crew Paul Kohlhoff and Alica Stuhlemmer. The Germans scored 2,5,2 which might have been cause for celebration, but Kohlhoff was still sore at losing places in the race where they finished fifth. “Mistake after mistake,” he said. “It was frustrating to lose out after we’d been in third place for a lot of the race.”

Along with many other of the more established teams, Kohlhoff and Stuhlemmer have barely stepped on to the Nacra 17 since foiling their way to a bronze medal at the Tokyo Olympic Regatta back in early August. “One hour of sailing in Kiel and two days training here,” said Stuhlemmer.

The fleet seemed to invert on the first beats as the favoured side flipped in the last third of the course, often leaving those on the right side hung out to dry. It was the runs, however, where the concentration of the more experienced teams paid dividends.

With ocean swell topped with small chop, the fleet decided to fly the weather hull and conservatively skim the leeward hull instead of laying flat and foiling high on all four appendages. “You could foil for a short period but you’d end up crashing pretty hard,” said American crew, Sara Stone. “With the leeward hull in, it was like a stabiliser and we could skim way more often that way.”