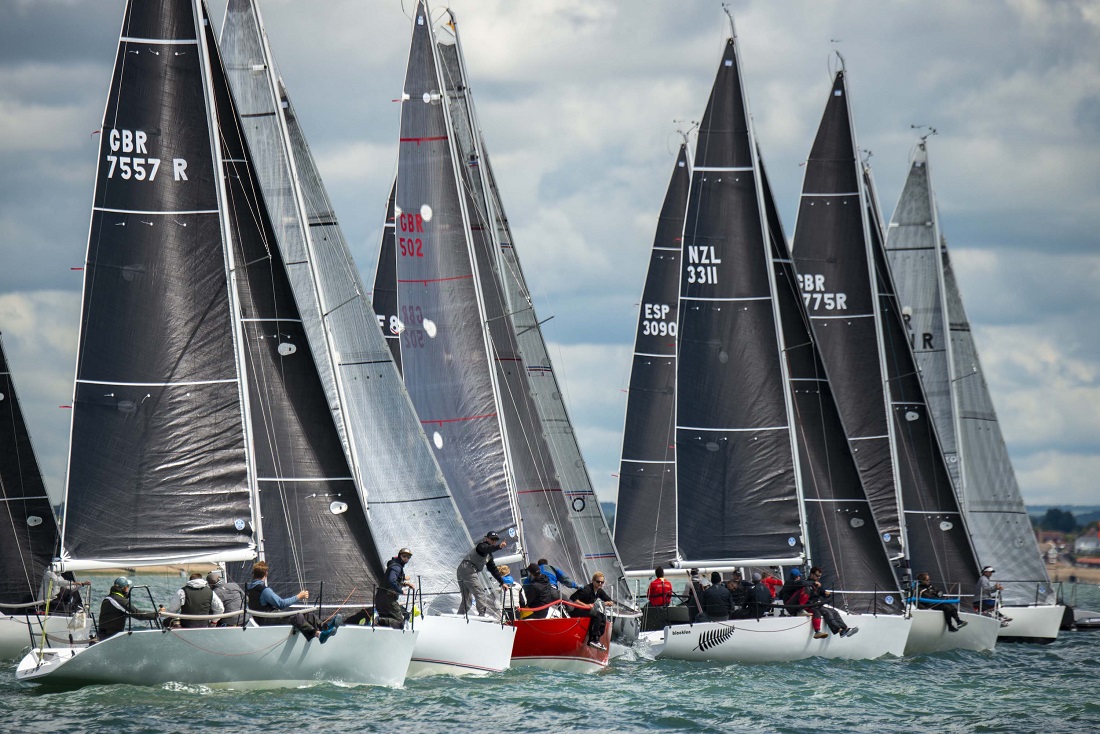 Racing continued at the Quarter Ton Cup today and a change in the wind brought with it a change in fortunes for much of the 19-strong fleet which saw a reshuffle on the leaderboard.

The Solent delivered a steady 10 knots of breeze and blue skies which the 19-strong fleet revelled in, with four short windward-leeward courses keeping the pace on all day.

Ian Southworth’s Protis continued their winning form taking spoils in the first two races which they followed up with a second and third place to hold firm at the top of the leaderboard.

Never far behind was Sam Laidlaw’s BLT. So close were Laidlaw and Southworth through most of the day that they finished joint first on corrected time in the sixth race of the regatta.

As the reigning Quarter Ton Cup champion with Aguila, Laidlaw is clearly hoping to hold onto his silverware with his newly refurbished Jacques Fauroux designed ‘Bullit’ and will go into the final days racing tomorrow in second place.

The only team to break their stronghold at the top of the leaderboard was Tony Hayward’s Blackfun, who won the seventh race of the regatta and the final race of the day. The team however had a mixed day with a 13th place in race four following an OCS which they were able to discard, and so have gained a position overall and are currently in fourth place.

Coming to the fore today was Rickard Melander’s Alice II crew, who are flying the Swedish flag. The international team built on their solid performance from day one to take second place in the first race of the day just eight seconds behind Protis on corrected time.

“The first race was a really great race for us,” explained Melander. “We got a great start and everything worked. The race after wasn’t so good. We had a penalty after the start and we tried to get back into the race but we struggled so overall it was a mixed day for us. For me, it is great to be back racing in the fleet. The racing is so good and so close. It’s the best racing over the whole year.”

Race five and it was Tom Hill’s Belinda’s turn to crack the top three. The team, which includes single-handed sailor and Vendée Globe hopeful Pip Hare, (who says she isn’t used to such a crowded boat), crossed the finish line first, but narrowly missed out on the win by four seconds on corrected time.

Hill commented: “The second race we had a super start and were first over the line which is our best result in any quarter ton race ever, so we’re really pleased with that. The boat is extremely fast and we’re still learning how to sail her properly. This fleet is very tight, and learning exactly what to do in each situation still takes a bit of appreciation from everybody on the boat.”

Next up, Derek Morland and Tim Rees racing a boat borrowed from Peter Morton, Genie, took their turn in the top three finishing race six in third place. Having won the first revived Quarter Ton Cup in 2005, Morland and Rees are amongst the most experienced of the quarter ton competitors and they love the challenge of the event.

“Our tactics are very simple – we start on the committee boat and tack immediately into clear air, try and stay in clear air and try and go as fast as we can. Sometimes it works, sometimes it doesn’t, but every now and again we get a good one and today was brilliant,” an ever smiling Morland said on the dock. “This is Morty’s boat – we bumped into him in a pub and we borrowed it, so we got him a third and we’re pleased.”

He continued: “We love the boats, they are fantastic, you don’t see boats like this anywhere else. The enthusiasm that gets people to put all the effort into turning the boats into what they are today is why we are here. We love quarter tonners and we keep coming back.”

Olivia Dowling has also made a welcome return to the fleet this year with her quarter tonner Catch, and her team built on their solid performance from yesterday to gain three places on the leaderboard thanks to a fourth and two fifth place finishes today.

Innuendo, which is owned by Peter Morton and today was helmed by Darren Martson, also made some big gains on the overall rankings, with a fifth and a two sixth places helping to boost their overnight ranking from 15th to 10th.

Speaking dockside after racing, Marston, who knows the event well as the former owner of both Catch and Cote, explained: “Morty asked me to come and steer for him today. It’s a bit of a poisoned chalice, but I really enjoyed it.

“It’s great to be back and sailing in the fleet. I last raced in this fleet in 2011 so it’s a welcome return. The standard is just phenomenal. Everything they say about the fleet is true – it’s super close and it was really nice to be out there today. The diversity of the fleet, the designs the people, it’s great to see.”

For two-times Quarter Ton Cup winner Louise Morton, it was a bit of mixed day for her Bullet team. An OCS in the first race saw the experienced team settle for an uncharacteristic mid-fleet finish, but two fourth places and a second in the final race means they hold strong in third place overall and with a nice cushion of 11 points to fourth placed Blackfun.

The forecast for tomorrow’s final showdown is threatening increasingly light winds and rain.