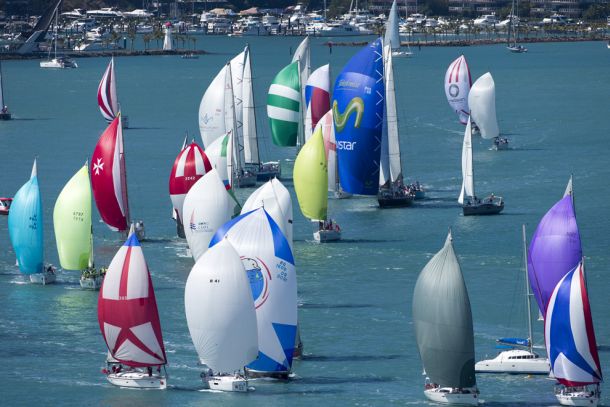 A rush of late entries for Hamilton Island Race Week, which starts next Saturday, has seen the fleet number surge beyond the magical figure of 200. Early today there were 202 entries, making this year’s fleet the second largest Race Week has seen in its 32-year history.

Growth is the result of an exponential rise in the number of multihull entries since the division was added back into the schedule of racing in 2013, when a fledgling fleet of five turned out. This year 31 multis – both racing and cruising – from as far away as Western Australia and South Australia have bolstered the fleet considerably.

The Hamilton Island IRC Australian Championship has proven a huge drawcard for IRC owners, and the introduction of a division for trailables came about given the interest from that section of the sailing community.

The 200th entry came over the weekend when Victorian yachtsman, David Perkins, entered his Jeanneau 54, Vanilla, in the cruising division for Race Week 2015.

The good news for Perkins and his crew is that by being the 200th entry they are already Race Week winners: regatta organisers will present them with a magnum of Piper-Heidseick champagne to celebrate the milestone.

Perkins is sailing Vanilla on an extended cruise along Australia’s east coast. His schedule is structured around regattas and desirable destinations along the way. His long term plan is to cruise through the Pacific.

“This great fleet confirms that Audi Hamilton Island Race Week continues to stand as Australia’s premier offshore regatta, and undoubtedly one of the best sailing events in the world,” Bourke said. “From our side, we are well aware of the effort all participants, their families and friends, put in, just to be with us each year. It’s this commitment on their part that causes us to work even harder so every Audi Hamilton Island Race Week is bigger, better and more fun.”