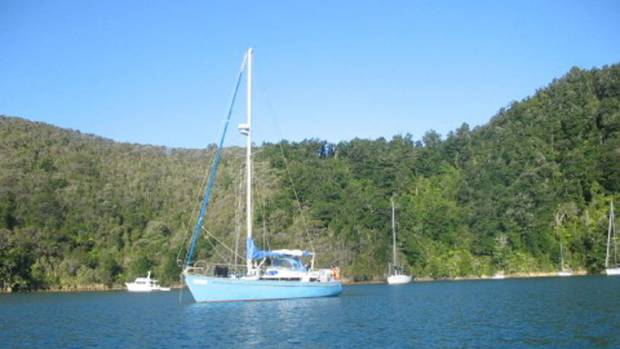 A man who has spent the last eight years searching in vain for his missing boat is close to giving up.

Paul Sugrue has decided to send recreational divers down to check a shipwreck north-east of Allports Island, just out of Picton, in what will be his “final attempt” to find the Sioux.
Dives at the site last month by a commercial diver proved unsuccessful due to poor visibility, leaving Sugrue with few options at his disposal.

The light-blue yacht vanished from Waikawa Bay, near Picton, after breaking free from a mooring in stormy weather on June 4, 2010.

Sugrue said he was notified of the ship wreckage in the Queen Charlotte Sound after the National Institute of Water and Atmospheric Research (Niwa) carried out a survey of the seabed after the 7.8-magnitude earthquake.

“I had a commercial diver check it out and he made two unsuccessful attempts to dive on it.”
Sugrue also tried sending a camera down to get a picture of the shipwreck in February but had no luck.

The boat hook failed to catch onto the wreckage, making it impossible to get any photographs, he said.

The shipwreck's mast was at a depth of 37m, Sugrue said.

In 2015, another supposed sighting of the Sioux got Sugrue's hopes up for nothing.

A mystery wreck was discovered on the sea floor of the Marlborough Sounds but it turned out to be a much older launch, found by the Defence Force during a training exercise.

Police confirmed that wreck, found on the sea floor of the Picton Harbour, was the Black Prince.
The boat was previously named the Jean and operated as a fishing boat before it was converted into a pleasure craft and renamed the Black Prince in the 1980s.

While he still hoped to determine whether the sunken boat off Allports Island was his missing Sioux, he said sending the recreational divers down would be the “last attempt.”

He said in February he would try to salvage the boat if it was in a reasonable condition.