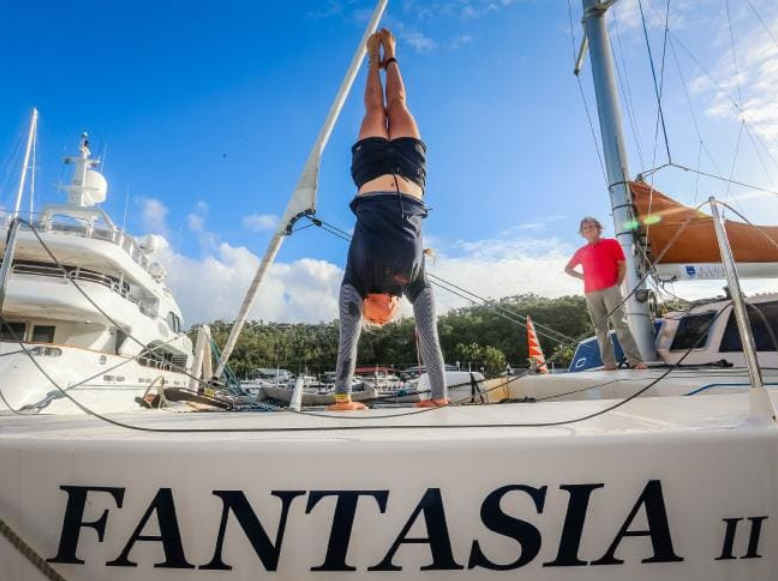 Mara Stransky is an impressive young woman. Aged only 20, and having sailed a Laser competitively for only four years, she has made spectacular improvements in the highly competitive world of Olympic class sailing.

Mara's immediate reward for two recent top 10 placings at regattas in Europe has been selection in the Australian Sailing Team to compete in the test event at the 2020 Olympic venue in Japan. Although there are a lot of Laser races to be sailed before the Olympic team is announced, making the test event squad is a very big step towards her goal of wearing the green-and-gold in Enoshima next year.

It should come as no surprise that Mara is comfortable around boats. When she was born, her parents Andrew and Carolyn had been cruising the world on an Adams 13 for 17 years. Carolyn returned to Australia for the birth but four months later she and baby Mara flew to the Canary Islands to rejoin Andrew on the yacht.

When Mara was nine, the family moved from monohulls to multihulls and they, and Mara, still live on Fantasia II, the 50ft catamaran that Andrew built on Russell Island in Moreton Bay. They have cruised extensively in Asia, including Indonesia, Singapore, Malaysia, Thailand and Borneo and have raced Fantasia at regattas in Asia as well as Airlie Beach and Hamilton Island Race Weeks.

Mara says living on board is all she's every known, so she doesn't think it's a big thing. But it is obvious that the unusual upbringing has delivered plenty of positives, and not just in boat handling skills.

My first impression of the diminutive 20-year-old is that she's very comfortable in her own skin. She exudes a quiet confidence and considers my questions carefully before giving straight and intelligent answers. She is a deep thinker about her sport and her rapid progress is obviously a result of being a quick learner.

In the 2018 World Championships she won a race and was second in another, but finished 43rd overall. I suggested that perhaps consistency was the problem.

“Last year you would have been right,” she replied. “I made it (consistency) my number one priority and it has started to come together. Now I'd say it's a strength, not a weakness.”

At the recent European Championships, where she finished seventh behind the Rio Olympic gold and silver medallists, the early races were in light wind with lots of current while the medal race was held in stronger winds. Mara, it seems, is now able to perform well in all conditions.

“I'm quite small so I did have an issue in strong winds, but now my upwind speed is fairly competitive across the range and so is reaching. But I'm useless downwind,” she finished with a laugh, indicating clearly what the current priority for improvement is.

I am reminded of 2012 Olympic Laser Champion, Tom Slingsby, when Mara speaks about her progress and what she needs to do to win. There is a strong determination in her voice and a very firm understanding that if she is to succeed, it will be because she worked hard at it, both physically and mentally.

Slingsby would do two mixed martial arts sessions in a row, against a black belt, and would then grab his bike and ride for 40 minutes before going out in the Laser for a couple of hours, just to put physical pressure on himself and learn to sail when tired.. In the lead up to London 2012, he threatened dire retribution if I wrote about his fitness regime because he wanted his competitors to think everything came naturally to him.

Slingsby's dedication and determination came to mind when I followed Mara's reports of a marathon training sail she completed on the Saturday of Labour Weekend last year.

“I sailed out through the Gold Coast Seaway at first light,” Mara wrote. “Heading offshore past South and North Stradbroke and Moreton Islands, I then rounded Cape Moreton, and reached across the top of Moreton Island before beating back down the west coast to finally rest off Tangalooma, arriving just before dusk.

“Although the forecast had sat fairly steadily between 15 to 25 knots in the week leading up to my trip, the southerly front hit with a fair bit more ferocity than we had envisaged, rapidly blowing out to 25 to 35 knots once I was on my way. By the time I rounded Cape Moreton the weather station there was recording 33 to 40 knots, so it's safe to say we certainly got a bit more than we'd bargained for!

“Once out however, there was really no option of turning back or having a break, so it became a matter of hanging in there and surviving it the best I could. My parents accompanied me sailing in Fantasia and were keeping me in sight, which was not always easy in such conditions but it was comforting to know they were there.

“After two hours of humming foils, negotiating breakers, slamming off wave crests, being constantly hosed and having no real thoughts other than ‘which way to attack the next set of rollers’ or ‘when the next best time to stretch my hands and wipe my sunnies would come’ started to become tiresome. So you can imagine after six more hours of the same, I certainly had a few low points, where I questioned the sanity of this whole undertaking and wished I had've taken up a less boisterous past time like gardening to fill my long weekend with!

“I have been asked why I set myself this goal… I guess I wanted to test my mental toughness and physical endurance, to see what I am capable of when really put to the test.

“Now that I have begun a search for sponsorship to assist me in my 2020 Tokyo Olympic campaign, I hoped that I might gain some recognition for who I am and just how much I am willing to put into any goal I set. It has been noted that I can be single-minded and very determined when I set out to do something but surely that is a trait any Olympian needs.”

You can read about Mara's marathon in full at www.lasersdownunder.com.

Australian Women's Olympic sailing has been at a comparatively low ebb in recent years, after the gold medal successes in the 470 at Sydney 2000 and Beijing 2008. Australian Women have won just two silvers (Women's Match Racing at London 2012 and Lisa Darmanin with her cousin Jason Waterhouse in the mixed Nacra 17 at Rio 2016) at the last two games, while the men collected three golds in 2012 and a gold and two silvers in Rio.

The Laser class has been particularly impressive, with Tom Slingsby and Tom Burton winning gold at the last two Olympics. Although both are highly talented sailors, they have undoubtedly benefited from the superb coaching of Michael Blackburn and the very competitive Laser squad he has created, where even the Olympic Champion comes under pressure just to be selected for the sole spot at the Games.

Now, the Laser women are in a similar position, with Mara knowing she will come under pressure from the likes of Zoe Thomson, Elyse and Jacinta Ainsworth, Paige Caldecoat and Marlena Berzens for the Tokyo Olympic selection. Her two recent top 10 results against the best Laser radial sailors in the world have given her the edge over her Australian competition, but there is a long way to go.

Fortunately for Mara, most of the big Laser events in the lead up to Tokyo take place right here in Australia. There is more travel in store over our winter, with the Laser Radial Worlds and the Olympic test event both to be held in Japan in July and August respectively. Then Mara is eyeing off the Under 21 Worlds in Split, Croatia, in November. 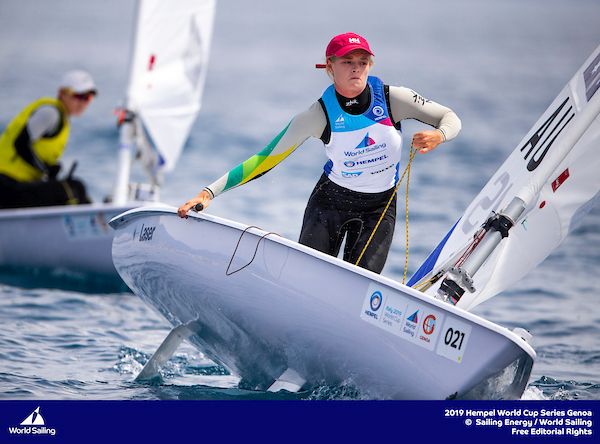 But the Laser 2020 Program in Australia really plays into her hands. The Australian Championships are at Sandringham in early January, followed nine days later by the Oceania Championships and Sail Melbourne at the same venue, then in February the 2020 Laser Radial World Championship is also being hosted by Sandringham.

Mara was added to the Australian Sailing Team after her top 10 finish in the Europeans. Prior to that she had received a John Harrison Grant from Royal Queensland Yacht Squadron and minimal funding from the Australian Sports Foundation. Everything else was funded by her parents, who live on their catamaran and rent out their Russell Island home on Airbnb to cover the costs of trips to Europe.

Funding will improve with full AST membership, but if Mara is to achieve her goal of sailing for Australia at Tokyo 2020, she will need every dollar she can get. If you would like to support this tough, talented and intelligent young woman and her quest for an Olympic medal, donations can be made through the Australian Sports Foundation.

For every donation of $2 or more, the ASF provides a receipt to the donor that they can then use to claim their tax deduction for the donation. Go to https://asf.org.au/donate/mara-stransky/ to donate.