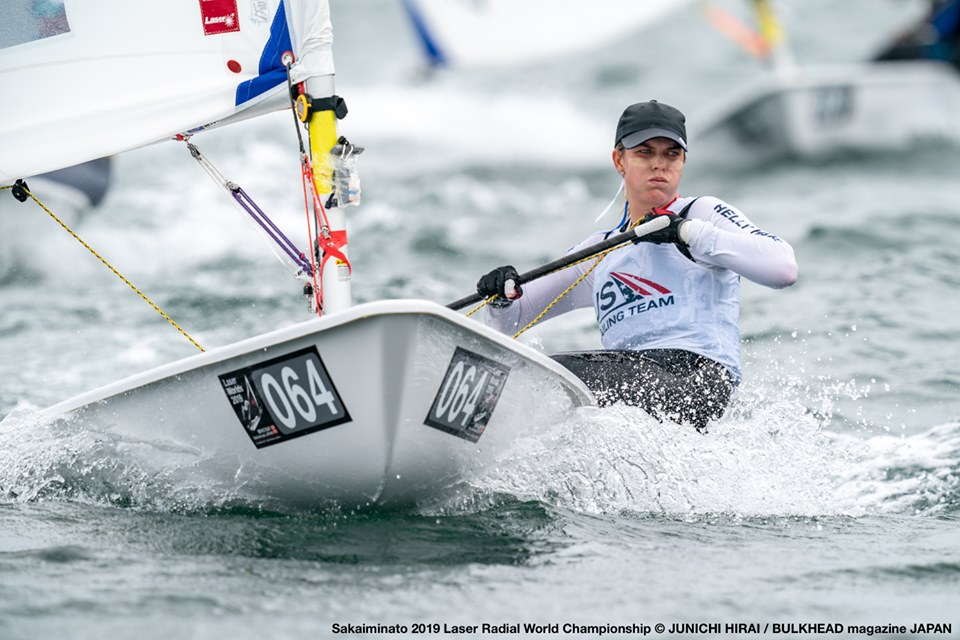 Miho Bay, Japan: The typhoon that was headed north towards the Sea of Japan veered west, over the Korean Peninsula, and is no longer a threat to Radial Worlds in Sakaiminato City. But it’s likely influencing weather patterns in the region, so it’s at least an indirect threat. Similar to yesterday, Day 3 at Radial Worlds started with optimism, but at times racing looked questionable. An initial course was set for 15 knot winds at a heading of 185 under moderately rainy skies.

The skies were clearing by start time, and the wind softening, but conditions were raceable and the Men’s fleet started their Race 5 cleanly. RC held off starting the Women’s Yellow fleet, to give the Men some separation and to adjust the first mark to a 5 deg shift to the left. But after one General Recall, Yellow started their Race 3 without penalties under a building breeze. The Women’s Blue fleet needed three starts (six sailors received BFD penalties in the second) but by early afternoon all three fleets were on the course or finished.

The wind was gusty, mostly in the mid- to high-teens, and there were clear differences across the course. But it did seem that the leaders on the inner trapezoid (Women’s Yellow & Blue) often came into the weather mark from the left side of the course.

Paige Riley (USA), who finished second twice today, confirmed this. She thought that coming in from the left near the top mark worked for most of the day, whether it was geographic or just how the oscillations lined up lined up with the Yellow fleet. Mostly, she thought it was a matter of staying in pressure as you worked your way up, and down, the course.

A second round of races were started early afternoon, first Red (Men’s), then Yellow (Women’s). But before Blue got off a clean start, things got weird. The wind shifted right ten degrees, then another ten, and then kept going. By the time Yellow was halfway down to the bottom mark they were reaching, and RC had no choice but to abandon the race. Everyone drifted and waited while the wind died, built, and died again, shifting throughout.

It took 90 minutes for the breeze to settle back in at the original southerly direction, but ultimately Red (Men’s) and Yellow & Blue (Women’s) got in another race before the 1800h off-the-water deadline. It required shortening the final race at the second weather mark for Blue, but the day concluded with Race 6 for the Men and Race 5 for the two Women’s fleets and the end of their Qualifying Series.