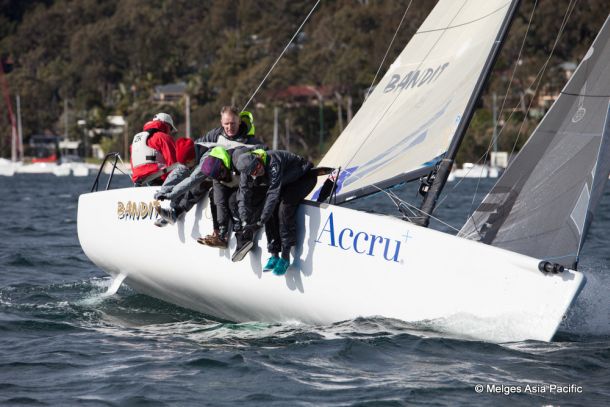 The Royal Prince Alfred Yacht Club hosted the Mid Winter One Design Regatta for the second year over the weekend of the 11-12 July. The Melges 24 fleet was the largest of the five classes with three competitors travelling from South Australia and one from Victoria to race against the Sydney fleet, evidence of the future and popularity of this growing One Design class in Australia.

On Saturday Pittwater provided sunny winter sailing in a 5-10 knot northerly. The winds were shifty, and racing tight, close finishes in all four races, crews working hard to maintain positions. The Melges 24 class is attracting Australia’s younger sailors, and they were in the top three positions at the end of day one including Sasha Ryan leading on Kraken, Peter Kendall Amigos and Adelaide sailor Luke Stephens Adrenaline.

The predicted Southerly Gale or Arctic Vortex (as reported in the media) for Sunday provided an opportunity for the more experienced Melges 24 sailors to mount a challenge. The fleet were eager to compete and the race committee started the racing earlier to secure starts. The fleet completed a further four races in gusty and extremely shifty cold winds, good race management and experience showed. As with the other classes it was minimal mistakes and a dash of luck that paid off. The finishes were close and Sasha did well to maintain her lead, along with Peter Kendall holding onto second place overall. Adelaide competitor and class Vice President David Royle Outlier was able to move into third place adding a second and third to his day two results.

In line with the International class the Australian Melges 24 fleet is encouraging Corinthian competitors. In addition to second place Peter Kendall Amigos won the First Corinthian trophy which is a testament to the quality of the Australian fleet, where the majority of the class is Corinthian.

Lake Macquarie sailor and Class President Dave Young No Comment saved his flying finish in first place for the last race saying the ride “made his weekend”.