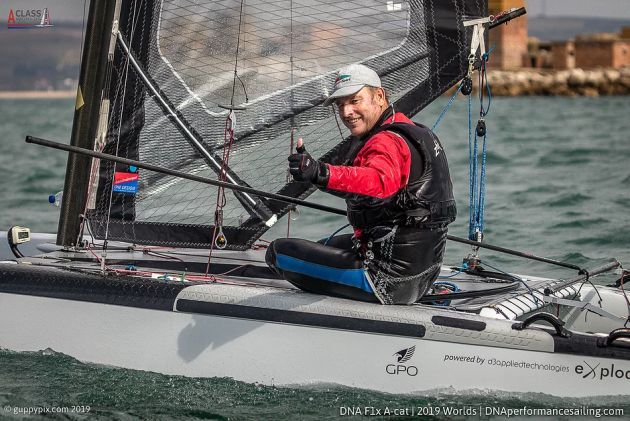 Andrew Landenberger, who won a silver medal in the Tornado class at the 1996 Olympics in Atlanta, has been crowned the World Champion in the Classic Division of the A Class Worlds at Portland/Weymouth in the UK. 'Landy' won the last seven races to take the title by a massive 12 points.

Mischa Heemskerk from the Netherlands dominated the foiling fleet, winning eight of the 12 races to finish 29 points ahead of New Zealander Dave Shaw to claim his third world title. Poland's Tymoteusz Bendyk was third.

The Kiwi sailor broke his rudder in the opening race of the series. The 21st placing in that race was one of his two drops for his worst results and in the second half of the regatta never finished outside the top four in an impressive show of consistency.

Fellow Kiwi Phil Robertson, who skippers the Chinese team in the Sail GP series and is a multiple match racing world champion, improved considerably as the week went on. He was 10th in the 64-boat foiling fleet and finished off on a high by winning the last race.

Weymouth dished up all manner of conditions, from five knots early in the regatta to 21 knots. Both Shaw and Robertson were more prominent in the breeze and Robertson's race win was achieved in champagne sailing conditions of 14-17 knots.

The next world championships will be held in Florida in October 2020.