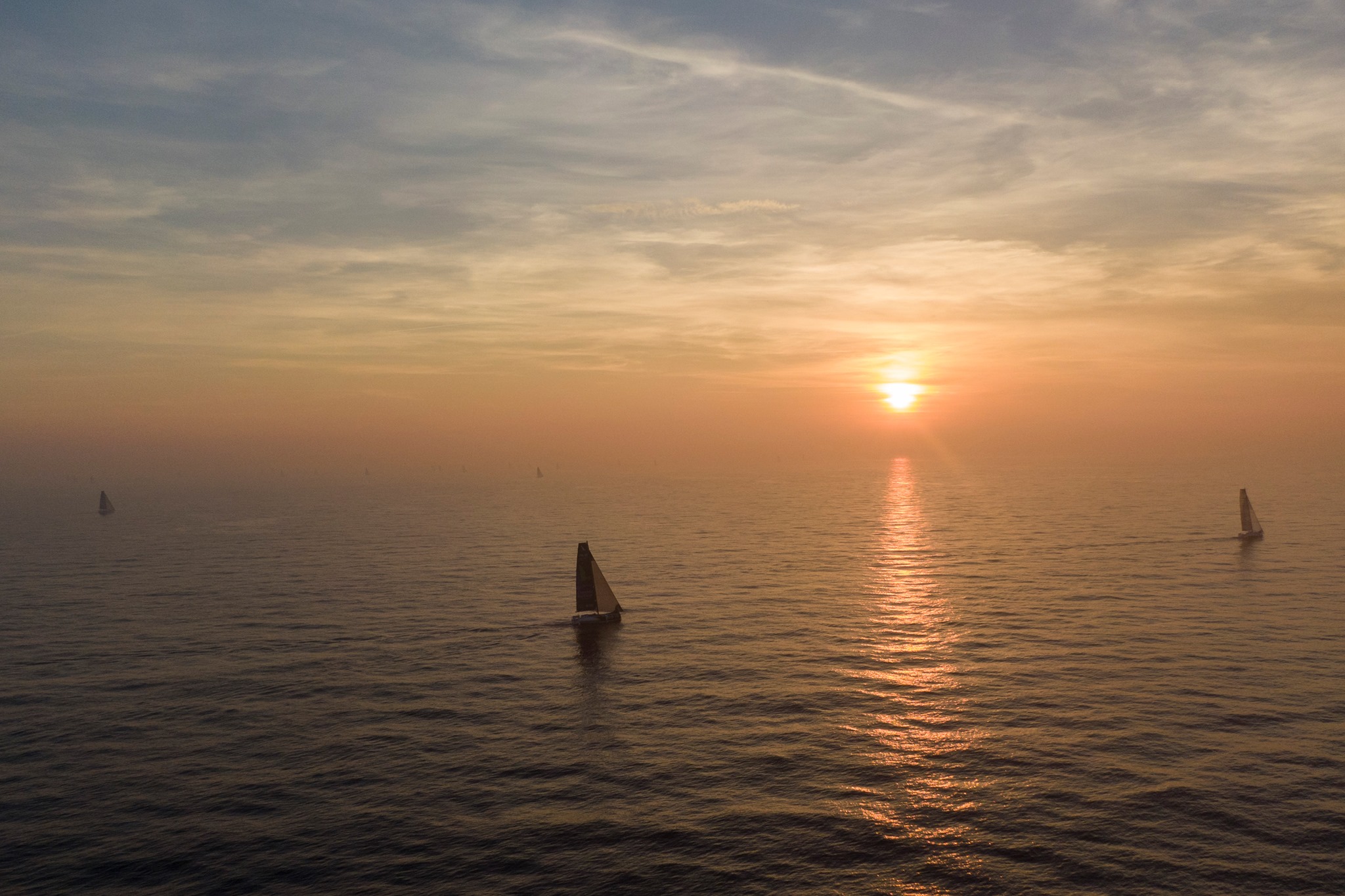 After spending most of the second afternoon at sea since leaving Fécamp on Sunday afternoon, shadow boxing with the 20 mile northerly perimeter of the Casquets Traffic Separation Scheme, the leaders of the third stage of La Solitaire were taking a much sharper southerly slant in search of the forecasted strong easterly breeze that is expected to roll back up to the sailors from the French coast.

All of the top skippers who spoke on the VHF today admitted that their original strategy was to go south of this almost square exclusion zone that lies north east of Alderney, but it seems like no one was bold enough to break for the south on what was a not very appetising angle.

It was left to Tanguy Le Turqais (Quéguiner Innoveo), the young Catalan rookie Pep Costa (Cybele Vacances-Team Play To B) and Italian American Francesca Clapcich (Fearless – State Street Marathon Sailing) to lead a group of six round the south of the no go zone. They were going three knots faster than the leaders and pointing more directly towards Land’s End, the next waypoint on the 624 miles course to Morlaix Bay via a mark off the southwestern most tip of Wales.

Xavier Macaire (Groupe SNEF), winner of the first leg and second overall, has led since the turn at South Pullar mark at around 2230hrs last night. Race leader Pierre Quiroga (Skipper Macif 2019) was leading but chose not to make the early gybe at the mark which is to the east of the isle of Wight, and lost out to Macaire and others. Quiroga is now in fourth place.

Racing in warm, sunny conditions the leading peloton of ten boats is tightly packed, constantly benchmarking themselves against each other. Conditions are easy – warm and sunny with six to eight knots of breeze and the prospect of carrying big spinnakers all the way to Land’s End where they should reach early tomorrow morning.

Britain’s Alan Roberts (Seacat Services) made an excellent start to the leg and was approaching South Pullar in second position after Macaire but got caught in the bunch as the fleet compacted in the strong contrary tide and very light winds. He is still nicely in contact with the main group in 17th but two miles back from the leading line. Correspondingly Ireland’s Tom Dolan (Smurfit Kappa-Kingspan) came back from the very depths of the fleet on Sunday afternoon’s reach across the English Channel to wriggle up to seventh on this morning’s light winds run but he is 14th at three miles behind Macaire.

Just over a mile ahead of nearest rival Quiroga but left in a bit of a leeward position Macaire said the race is more or less re-starting from the TSS corner, “This is not what I had hoped for this morning and this afternoon. I was trying to play a wind shift and it didn’t go as planned,” said Macaire. “I was expecting an easterly wind as the files predicted and I still don’t have an easterly wind. There are rivals who are further south who have managed to get back to me, it’s not too serious.

“It makes a new start in a way. It’s amazing, all the weather forecasted this east wind for noon and we haven’t got it yet. We had 6 knots of wind earlier on now it’s more like 8-9 knots. It’s moving fast now so it’s not bad to be with the flow right now.

“I am calm, there is such a long way still to go I am happy with my start to the race, just a little disappointed with this change that did not happen. I could have scored the advantage since I broke away on my own, but it just got me back into the game. But I am calm for and will stay that way for the rest of the race!”