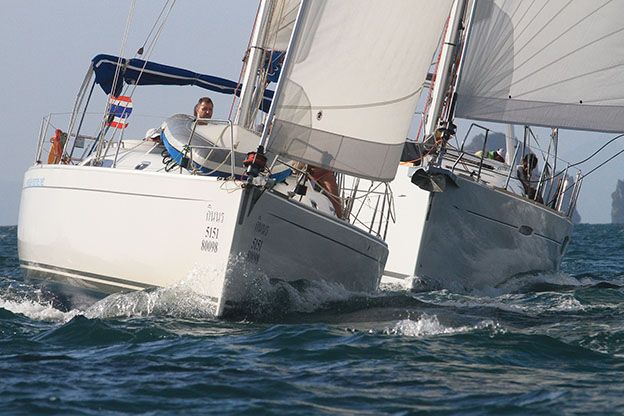 The cruising classes enjoying the good breeze on Day 3

PHUKET, Thailand – Opting for just two starts each day – monohulls and multihulls – has proven a successful strategy for the 2017 The Bay Regatta, getting the boats off early and enjoying the good breeze and eye-candy that is the Andaman triangle of Phuket-Phang Nga-Krabi.

In the Racing Class, Megazip seems to have the measure of Fujin with another win today making it three from three and an unbeatable lead going into the final day. In Cruising A, however, there were some changes as Hellmut Schutte’s Aquavit 6 won today's race and with it now lead the series. Second on the day went to Gavin Wellman’s Rascal’s with Woodrow Christensen’s Linda rounding out the top three. Gary Smith’s Baby Tonga went walkabout and ended taking the wrong course (the racing monohull/ multihull course), thus finishing last today, but their previous strong finishes keeps them in second overall.

There's no stopping Canadian Jim “Yee Haw” Ellis’s Remington in Cruising B Class who's third win from three races sees them comfortably on top. The Gillow-skippered Poco and the Robert Camera-helmed Piccolo swapped second and third spots from Day 2 giving Poco second spot overall with nine points, while Piccolo (a 1976 Sydney-Hobart winner) sits in third with ten points. Kevin Gillow has amazingly competed in all twenty The Bay Regattas.

Kinnon skippered by Stanislav Pechenkin finished one minute ahead of Aussie Alan Bower’s All Sail Asia on corrected time in the Bareboat Class, and a half-an-hour ahead of All Sail Venus Hunter (Russel Waddy) repeating the 1-2-3 of yesterday.

It was a third straight line honours for Fergus Wilmer’s Thor. Despite finishing eight minutes ahead of John Newnham’s Twin Sharks they could not convert it to a win on corrected time, and had to settle for second place behind Twin Sharks with Java, skippered by Mick Coleman, finishing in third.

The final day's racing concludes on Sunday (19th February) with a the series prize-giving held at Kan Eang II in Chalong (Phuket).