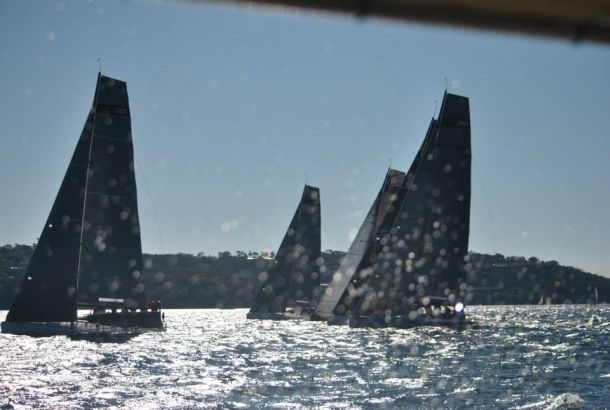 MC38s off and racing in gusty winds - Ellen Pragnell-Raasch pic.

New Zealander Howard Spencer and his Menace crew have taken an early lead in the MC38 Harbour Regatta hosted by the Royal Sydney Yacht Squadron this afternoon.

Spencer got off to a cracking start, winning Race’s 1 and 3 for a one point advantage over Leslie Green’s Ginger, which recently scored victory at Sail Port Stephens, and second place at the Autumn Cup, the class’s most recent one-design event. Ginger responded to Menace’s two bullets with two of her own; taking out Races 2 and 4.  Chris Hancock’s Vino finished the day third, four points adrift of the leader.

Menace was helped to victory today by Ray Davies, the Kiwi America’s Cup and Volvo Ocean Race winning tactician and fellow America’s Cup sailor, James Dagg, along with their well-prepared amateur crew. Davies said Howard Spencer’s team literally arrived into Sydney and jumped aboard their yacht for some practice yesterday.

Describing the three windward leeward courses and the passage race, which completed the day’s racing, Davies said it was a tough day. “It was very gusty and very shifty – as much as 40 degree shifts, with the breeze anywhere between 10 and 20 knots,” he said.

With winds predominantly from the west/south-west, tacticians had to earn their bacon today. “Because of the conditions it was quite dramatic racing,” Davies said. “It was very close with the lead changing just about every leg of every race – very dynamic competition.”

While Davies said owner Spencer, his wife Frances and the crew were happy with their performance. “But there’s room for improvement,” he said. “The passage race, a big three lap windward/leeward course was particularly tricky and we could have done better in that,” he said.

Responding, Peter Bourke from second placed Ginger, agreed with Davies’ summation. “Very exciting boats and an interesting day in tough weather. Everyone is hurting after sailing in big breeze, and we’ve just looked at the weather situation for tomorrow, which currently says we can look forward to 25 knots – I hope it’s a little less.”

On the passing lanes that were par for the course, Bourke said: “A westerly in Sydney Harbour is the best for allowing passing opportunities and it makes for exciting racing. Leslie (Green) enjoyed steering in these conditions and we’re looking forward to trying to take it to the Kiwis tomorrow.”

Marcus Blackmore’s Hooligan, new to the class, is sitting in fourth place, but is not at home himself, as he is suffering flu. It didn’t diminish his humour though, “It was thrilling racing, I loved every minute of it,” he quipped from home where is recovering.

The convivial Blackmore received news from his crew that a win in Race 4 was on the cards until a few mishaps occurred including being caught on the wrong side of a wind shift and heading to the finish gate a lap early.

Others, such as Ross Hennessy (Ghost Rider) newcomer Robin Crawford (Assassin) came to grief when they sustained damage in the difficult conditions, Crawford breaking a pushpit and taking his spinnaker prawning between races.

Very little separated the yachts throughout racing in this strict one-design class today. Just 19 seconds separated Menace and second placed Ghost Rider (Ross Hennessy) in Race 1, and less than a minute in the remaining races.

For results and visit: http://www.mc38association.com/