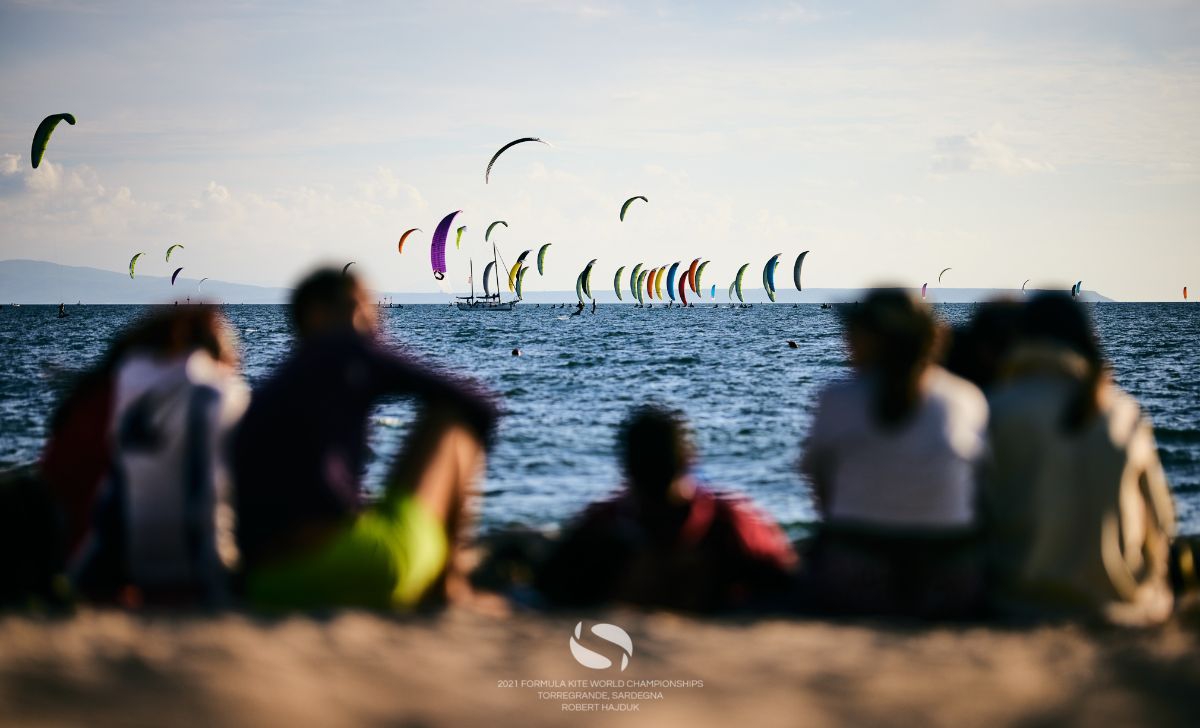 The penultimate day of the Formula Kite world championships fought out on the glorious Gulf of Oristano on the Italian island of Sardinia, sparked tense drama all over the race track in difficult conditions.

Shifty ponente sea-breezes that fluctuated between 7kts and 12kts, helped reshuffle the top of the men’s and women’s fleets, as many of the leaders struggled to find the form that had taken them to the head of the pack.

Reigning Formula Kite world title holder, the US’s Daniela Moroz, had a stuttering start to her day when she crashed in her first race. She was able to recover and secure second place. It was a mistake she did not make twice, taking three bullets that send her straight to the last day’s medal races final.

Britain’s Ellie Aldridge beat Moroz in an epic battle with a nail-biting finish, that gave the Briton a bullet. Aldridge came second and third place in the next two races, moving her up to second place overall.

The leading men also struggled to find their groove, with overnight leader, France’s Axel Mazella, conceding the top of the order when he failed to match his earlier, near-flawless pace of the regatta’s opening three days.

Fellow countryman Théo de Ramecourt profited to go head of the standings, despite a slightly patchy performance. But both Frenchmen also have the opportunity to reset as they, too, go straight to the final in the medal races shootout.

The promise of a thrilling finale comes after 138 athletes—89 men and 49 women from 34 countries and six continents – lined up to battle for the International Kiteboarding Association (IKA) world titles after a two-year break because of the pandemic.

It is the biggest kitefoil fleet assembled, testimony to the growing interest in the discipline, with the world championships marking the countdown to the Olympics and kiteboarding’s highly anticipated debut at the Paris 2024 Games.

The deciding medal races are made up of semi-finals and finals. The top two from the opening series go straight to the finals, while places three to 14 go into two semi-finals. Only the winner of each semi-final race advances to the final, making a total of four racers competing on a super short stadium track just off the beach for the benefit of the spectators.

In the final, the top seeded racer will begin with two winning points, the second with one winning point, and the semi-final qualifiers with none. The first racer to accumulate three winning points and hence the first over the line in the last race, is the victor, maintaining suspense to the end. Any racer in the top 14 can potentially win if they can score three wins first.

To earn their slots in the medal series the athletes were engaged tense duels as all the top men and women went head-to-head for the first time on day four of the regatta.

The outcome was intensely tight racing, with some of the leading contenders cracking under the pressure. By contrast, some revelled in the shifty breezes that kept many guessing.

Britain’s Aldridge was one of the winners as she moved up after her day’s four races, but echoed the views of many when she described how puzzled she had been by the wind shifts.

“It was a really tough day actually,” said Aldridge. “In the first race when it was still stabilising, there was a massive right shift and I got the lift which really helped me. But even in the following races, it was nearly impossible to tell which side to go, because it was so shifty.”

France’s Poema Newland, the Formula Kite European champion, maintained her third spot overall with a mixed day, but was disheartened by her results as she came ashore.

“I have never seen that in my life,” she said. “I tried every option, but nothing worked. I was so far back in the fleet because I just couldn’t understand where to go. The wind was just so hard to understand.”

Britain’s Katie Dabson leapfrogged several riders to advance to sixth overall and bag a semi-final berth. But she also found the breeze hard to read, a difficulty compounded by the tight startline populated with the strongest athletes.

“In these conditions it was all about the starts,” said Dabson. “But they got a lot tougher because there were so many good girls and everyone was fighting for the same place on the line. I’m looking forward to the medal series. It’s easier in some ways because there are fewer people, but any mistakes are punished.”

France’s Mazella paid the price for an unusually faltering performance, though in the end he dropped only one place to second. He accepts he has to find another gear for the medal races final medal.

“I just had no speed and it was important to have that, because the wind was so unpredictable,” said Mazella. “I don’t think I reached the top mark in pole position in any race. After that it’s hard to come back. Now I just have to reset as fast as possible and look forward to what’s to come in the final.”

If anything, Slovenia’s Toni Vodišek was the biggest winner of the day, leaping up the order with three bullets. He squandered a fourth close to finish line when he crashed at the final gybe mark close to the finish line while leading.

France’s Benoît Gomez also progressed to fifth overall with four slightly risky port-tack starts, ducking under the fleet. But he sensed correctly that the breeze nearer the beach offered a lift and a better angle to the weather mark.

“It was just the same as the Europeans in Montpellier,” said Gomez. “I took a port start and it worked. So, I just kept doing it. It’s really interesting to test the options. I’m really happy. Yesterday, I was ninth and now I’m up to fifth. Let’s see what tomorrow brings.”

All the action of the medals races finals will be featured on Facebook Livestream.

For the full results, see: www.formulakite.org/results