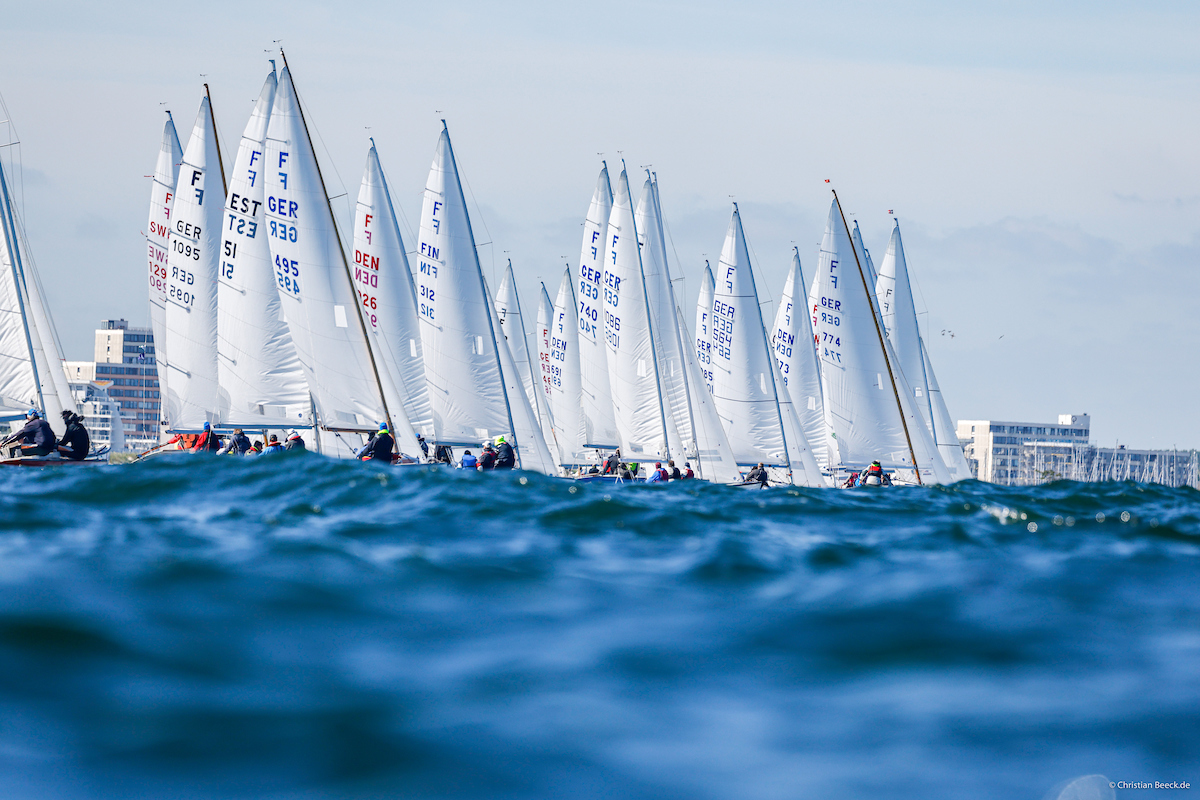 The first Kiel Week 2022 winners have been determined and saw four Germans, three Danes and a Norwegian plus Hungarians and Kiwis in front in the international classes. The Gold Cup in the Folkboats was won by Søren Kæstel, Erik Andersen and Alex Lindegaard from near Copenhagen. The Euro Cup of the 29er went to the George Lee Rush and Sebastian Menzies from New Zealand. At the halfway point on Tuesday (June 21), the athletes once again enjoyed fantastic sailing conditions on the Kiel Fjord with light to moderate westerly winds and bright sunshine before the Olympic part of the sailing regatta will start on Wednesday (June 22).

“Despite the difficult Monday, we are very satisfied with the first part of Kiel Week,” said head of organization Dirk Ramhorst. “We started the races an hour earlier on the last day. And we were rewarded with a terrific day, which rounded off the regattas of the international classes. We are now looking forward to the next five days with the Olympic disciplines, the 420s, the J/24s and J/70s as well as the ACO Musto Skiff World Championship. These will be more highlights with top fields.” But before Kiel Week celebrated half-time with fireworks over Schilksee at night, Ramhorst was allowed to present the medals to the winners of the international classes.

Folkboat Gold Cup
At the start of the day it seemed as if the German-Danish fight for the crown of the three-man keelboat class could become exciting again. While the crew of Ulf Kipcke (Kiel) moved from a lurking position in the overall standings to the top of the first day’s race, the top-positioned Danish crews chased the field ahead of them. But the overall leader, Søren Kæstel from Copenhagen, was able to get out of the dicey situation move by move, making up place after place. While Kipcke ended up second, Kæstel followed shortly behind in fourth. The Dane thus held all the aces for his fifth Gold Cup victory and played his cards hard in the final race.

From the start, he took intensive care of the local hero from Kiel, had him covered and went along with every tack. Since the Kipcke team was the only team that could have challenged Søren Kæstel for the triumph, the Dane was almost indifferent to his own ranking. At times it even seemed as if both crews would fall back to the end of the field, but at the finish they came in second (Kæstel) and fourth (Kipcke) again, securing first and second place ahead of John Wulff (also Denmark).
“We were maybe a bit hard on him. But it was just down to the two of us,” reported Kæstel’s crew Erik Andersen of his helmsman’s consistent fighting line. “But Ulf Kipcke did well, still came far forward again.” Still on the water, the Danes celebrated the coup. On land, Søren Kæstel left the work on the crane to his teammates. He himself set off to fetch sparkling wine. Andersen: “That’s his job. Because the winners of the Gold Cup have to fill the cup with champagne.”

29er Euro Cup
New Zealand’s George Lee Rush/Sebastian Menzies defied their own nerves, the pressure of their opponents and even a man-overboard manoeuvre when Menzies briefly fell out of the skiff after breaking the harness wire. Despite all the problems, they celebrated their first Kiel Week title in the junior skiff class and got in shape for more big tasks. “The wind was difficult, we didn’t get going at the starts and the level in the gold group was incredibly high,” reported helmsman Lee Rush.

After eight race wins in the nine races of the first three days, they now had to settle for 9th, 16th and 3rd place. With Germany’s Carl Krause/Max Georgi as first chasers posting good results but no wins, it was enough for the New Zealanders to secure gold ahead of Krause/Georgi and Swedish siblings Hedvig and Hugo Liljegren. Defending Kiel Week champions Anton and Johann Sach (GER) had a bad day and still slipped to eighth place. “We now have one day to relax. Then we will go to the European Championships in Denmark,” said Sebastian Menzies.

2.4 metre
The performance level of Heiko Kröger in the inclusion class was so high in the past few days that probably no bookmaker would have accepted bets on a defeat of the Hamburg native at Kiel Week. And the expectations were fulfilled. With two more victories, Kröger won his 13th title off Kiel in superior fashion ahead of Christoph Trömer (Germany) and Antonio Squizzato (Italy). “It’s still not a matter of course. The conditions in Kiel are always such that you can’t sleep for seconds,” said Kröger.
The 2000 Paralympic champion, meanwhile, has his eyes on entirely different problems facing his sport: “Sailing is facing huge challenges. Container freight prices have exploded. Three years ago, a container to America cost 6,500 euros, now it’s 36,000 euros. Nobody can afford that, so there has to be a rethink.”
The campaigner for inclusive sport also remains sceptical about the chances of a Paralympics return for sailing: “World Sailing has done a good job here in recent years and brought new nations to the starting line. But other sports are also pushing into the Paralympics program. That’s why I don’t dare predict which log we’ll draw when it comes to selecting sports.”

Contender
The Danish Contender aces found the final races somewhat arduous after Monday’s involuntary rest day. After places seven for leader Jesper Armbrust and four for chaser Sören Dulong Andreasen early Tuesday morning, even Hamburg’s Eike Martens came into play for the Kiel Week victory. But the Danish duo did not let themselves get off track and eventually secured the double victory with Andreasen just ahead of Armbrust and Martens.
“We both watched each other very closely. That’s why we didn’t achieve the top results of the previous days. It was a close battle the whole time and it was always about avoiding mistakes,” said Andreasen, who took his seventh win overall and fourth in a row in front of Kiel: “In the last race it got tricky again. Jesper and I started on the left side and the wind shifted to the right. This meant that we suddenly had sailors around us whom we had not met on the course before. After that, we had to work our way back to the front. But it worked out.”

Europe
Dane Caspar Fink passed the first German test with flying colors, and the next one will follow on Wednesday. With six wins and two second places in the eight races, he dominated the field. “The key to success was high boat speed – both on the upwind and downwind courses. It was really fun in this weather and with the waves on the course,” said the 19-year-old. After the success, he immediately threw himself back into work. Because on Wednesday he has the German exam at Sonderborg High School coming up. Fink’s compatriot Simon Christoffersen followed in second place, ahead of Marisa Roch from Kiel.

Flying Dutchman
The key scene of the FD decision was the start of the sixth of the nine races. Germans Kay-Uwe Lüdtke/Kai Schäfers were too early, conceded a black flag disqualification and had to give the overall lead to Hungary’s Szabolcs Majthényi/Andras Domoskos. “After that, they couldn’t afford any more strings and had to be careful at the start. We used that to our advantage, focusing on them and controlling them,” Majthényi said. “But it was always close. It was important for us to gain more experience in Kiel, because we want to be there in August for the anniversary of the Olympics.”
Lüdtke/Schäfers, who finished second behind the Hungarians in each of the past two World Championships, also see themselves within striking distance of the record world champions. “Without the early start disqualification, it would have been a different outcome. The next chances to beat them are in Kiel in August and the World Championships shortly afterwards on Lake Garda. I think it will be close. They don’t have the super-dominance of the past years anymore,” said Lüdtke.

ILCA 4
Gudleik Berg-Kjöpsnes was received jubilantly by his companions on shore. It was the first appearance of the Norwegian to Kiel Week and it ended immediately with the Europe victory in the junior class of the Olympic discipline. “Although I wanted to be here in the past two years, from then on was Covid. Now I had my sights set on a finish in the top three and tried to avoid mistakes. That worked out very well,” said the 16-year-old, who is now aiming further high at the World Championships in Portugal: “There I would also like to be very high up in the ranking.” Behind the Norwegian, the two girls Josephine Koep (Germany) and Nanna Sofie Juell-Bergan (Norway) landed on the following podium places

ILCA 6
With an UFD disqualification defending champion Ole Schweckendiek (Kiel) opened the day and put himself under pressure again. “That made it exciting. Fortunately, the New Zealander Armit also had a false start. After that, we both had to act cautiously. But everything went well with sixth and first place at the end,” said the 17-year-old. “The intensive winter training seems to be paying off now.” Kiel Week is now followed by the European Championships, then the Youth Worlds, the German Youth Championships and then the move to the Olympic ILCA 7. On his ambitions at the upcoming European Championships in Greece, the Kiel student is cautious: “I want to have fun and finish in the top 15.” Behind Schweckendiek, New Zealand’s Caleb Armit followed in second place. Newcomer to Kiel Amaya Escudero, who returned to Germany last year after a long stay abroad with her parents, still worked her way up to third place.

OK Dinghy
In the OK dinghies, there were only two race winners during the series: either André Budzien (Germany) had the bow in front or the Dane Bo Petersen. “We were always stalking each other, and I got a pretty good handle on Bo. Our series looks clearer than it was. But if we are in front, then we can also keep the distance,” Budzien said. The Kiel Week is always a highlight of the class. Pursuer Bo Petersen puzzled a bit where Budzien got the speed advantage but was the first congratulator on shore: “André was better here. The numbers don’t lie. But I’m well prepared for the World Championships in August, will fine tune the material now.” Behind Budzien and Petersen, New Zealander Greg Wilcox rounded out the podium.

Waszp
Adrien-Paul Farien also won the only race on the final day of the Waszp and beamed about his home victory in the second attempt. At the Waszp premiere at the Kiel Week last year, he had to give way to the Norwegian Mathilde B. Roberstad. This time, the 22-year-old did not miss a beat and finished first in all six races. But why did he give up the second one according to the results list? “I collided slightly with my training partner Leo Maechler. But we didn’t want a protest, so I just retired,” explained Farien, who nevertheless retained a white vest of points thanks to a strike. Maechler, also from Kiel, finished second ahead of Sweden’s Hanno Seifert.