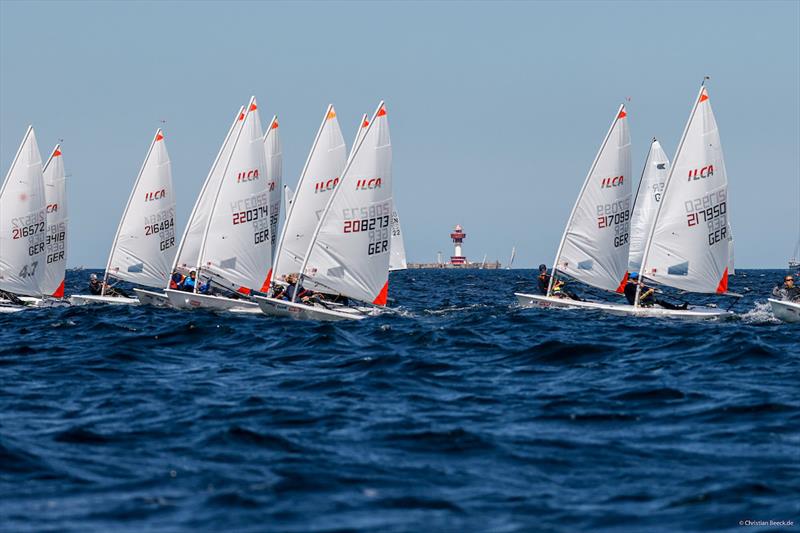 Medium to fresh westerly winds on a summer day of 23 degrees gave the 128th Kiel Week in its 140th year a picture-perfect sailing start on Saturday local time.

On seven courses plus the Eel Regatta for offshore yachts to Eckernfoerde, 42 races were completed – the full program.

In the Gold Cup of the Folkboats, Danish dynamite ignited. John Wulff and Søren Kæstel are on equal points at the top. In the 29er Euro Cup, New Zealanders George Lee Rush and Sebastian Menzies excelled with three bullets.

“These were ideal conditions that could hardly have been more beautiful,” organisation manager Dirk Ramhorst said.

At noon, 10 international classes started in the first part of Kiel Week, which concludes on Tuesday. The 29er skiffs were in the spotlight, easily observed on land by thousands of guests at the Olympic Centre Kiel-Schilksee.

Equal on points with the Kiwi duo, Carl Krause and Max Georgi from Germany took second place with two victories on the day.

“Three races with up to five Beaufort at the end, it could hardly be better,” enthused German Johann Sach. Crew of his brother Anton, last year’s winners rose from fifth to third to a win and are only two points behind the leaders in sixth place in the overall standings.

“Our starts were good, that was the main thing,” said the 17-year-old, “through the four groups everyone is still close together.”

The Folkboat crews had opened their Gold Cup on Friday evening with a cheerful march under samba rhythms to the stage in the Olympic Centre, and on Saturday celebrated their first two races in Caribbean conditions.

On the Foxtrot course off the eastern shore of the Kiel Outer Fjord, the three-man crews didn’t give each other another metre after the celebrations before. After all, the Gold Cup is considered an unofficial world championship. Denmark’s Per Jørgensen and crew are determined to defend their title, but today made do with fourth place behind Jens Thurøe.

The Contender class is also in Danish hands for the time being. Jesper Armbrust scored two bullets with one discard (8th) and took the lead ahead of his favoured compatriot Søren Dulong Andreasen (4-1-4). The Danebro is also blowing over the Europe class with Casper Fink and Simon Christoffersen on one and two.

The Hungarians Szabolcs Majthényi and András Domokos also have two first places in the Flying Dutchman with a dropped fourth.

In an internationally diverse field of participants in the Open ILCA 6, the Romanian woman, Ebru Bolat, took the top spot among 114 athletes in two starting groups, tied on points ahead of the Norwegian Sverre Langaas-Holt. Defending champion, Ole Schweckendiek from Kiel, was close behind in third place, again tied on points with Ukraine’s Oskar Madonich.

The Norwegian Nanna Sofie Juell-Bergan took the lead in the junior class ILCA 4 ahead of her compatriot Gudleik Berg Kjøpsenes.

In a tough duel with the Dane Bo Petersen, André Budzien from Germany kept the bow in front twice in the OK dinghy and is the first leader.

German Heiko Kröger remains a banker in the 2.4mR class. He was only denied the first win, which was won by Christoph Trömer (Germany). After that, the 2000 Paralympics winner showed his usual winning form twice. Even after twelve victories at Kiel Week, his hunger for success is far from satisfied.

The 56-year-old just finished third at the European Championships and was happy about the performance in Strander Bucht: “For me, it’s the first time sailing in Kiel this year. It’s always like coming home.”