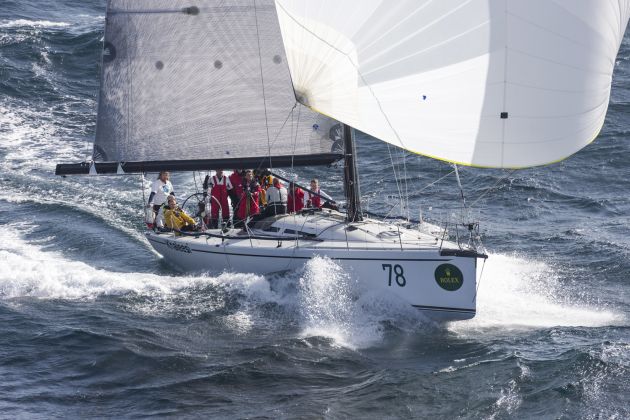 Race 9, the last of the Cruising Yacht Club of Australia’s Grant Thornton Short Ocean Pointscore series, was sailed in Sydney on the weekend, with Khaleesi coming out on top in Division 1 and the Jutson 31 Outlandish finishing first in in Division 2, but the race is under protest, with the outcome of it and the final pointscore winners to be known later this week.

Robin Hawthorn’s Beneteau 47.7, Imagination was sitting at the top of the PHS Division 1 leaderboard going into race nine, with a healthy six point lead on Andrew and Pauline Dally’s DK46, Khaleesi.

Khaleesi also won the race provisionally under IRC, but Imagination also led that pointscore going into Race 9, by just half a point, so all is riding on the outcome of the protests.

Andrew Dally described the final race. “It was pretty good weather-wise, but the first mark was either not in or it deflated. We were leading the fleet going to the first mark, so, unable to find it, we did a virtual rounding and most others followed us. It was a bit disappointing to end the series this way.”

However, Dally said all went well after the first mark. “From there it got better and all went well and the crew did a good job,” said Dally, adding that North Sails’ Michael Coxon had sailed with them. He made a huge contribution, especially with the sails and trimming them,” Dally said after beating Warwick Sherman’s Ker GTS43, Occasional Coarse Language 2 for the top spot. Tim Cox’s DK43, Minerva, was third.

Middle Harbour Yacht Club conducted the race under the guidance of Principal Race Officer, Steve Tucker, from aboard Hugh George. Division 1 was first away at 12pm, with Division 2 following five minutes later.

The fleet started in an 8 knot north-easterly near Shark Island, which increased as the yachts sailed up the Harbour and outside to a windward/leeward course before heading back into Watsons Bay.

“We went through the Heads in good pressure, but offshore conditions were shifty and fluky and 10 knots at best. But it was a beautiful day; you could get your head around it,” Dally said.

The protests for Race 9 are likely to be heard on Thursday evening. Results and the series pointscore will be updated on the CYCA website following the outcomes.

For provisional race results and overall standings in the Grant Thornton Short Ocean Pointscore log on to: