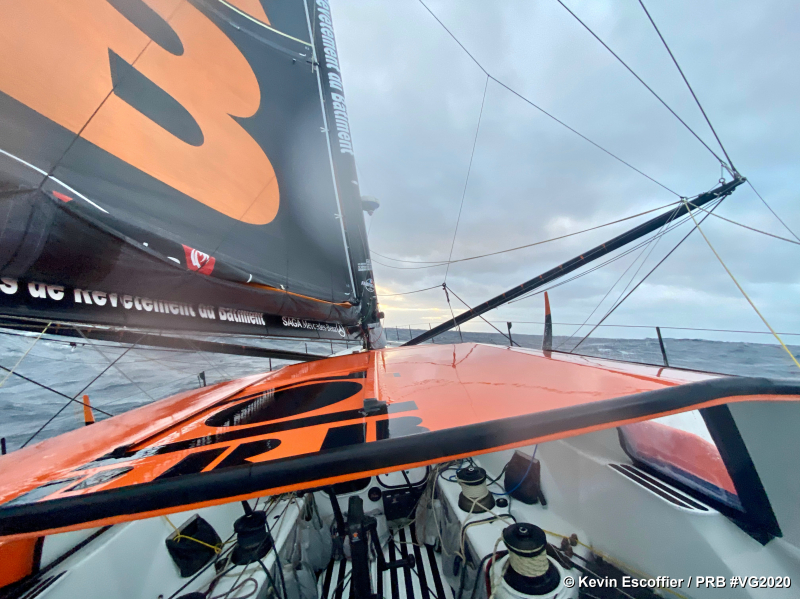 Kevin Escoffier, 40, who is racing in third place in the Vendée Globe solo non-stop around the world race, positioned some 550 nautical miles SW of Cape Town, has triggered his distress beacon. He was racing in a strong SW’ly air stream on starboard tack behind a weather front.

At 1346hrs (UTC), Escoffier managed to send a message to his shore team, explaining that he had an ingress of water into his boat. The rescue authorities (MRCC Cape Town and CROSS Griz Nez) are preparing an action plan in collaboration with his PRB shore team, with Jacques Caraës and the Vendée Globe Race Direction team. Jean Le Cam, the nearest competitor, has changed course to sail to the last position given by the boat when the beacon was triggered (40°55 S 9°18 E).

Le Cam is expected to reach the area at around 1600hrs UTC. More information to follow.

Guided by Race Direction Le Cam arrived on zone around 1615hrs UTC and quickly established visual and voice contact with Escoffier who was in his liferaft but he was unable to retrieve him in the big, 5m, seas and 20-25 knot winds.  The positioning of Kevin Escoffier's personal beacon (AIS MOB Man Over Board) emits HF radiowaves and will only be detected in the local zone.

As he was manoeuvring to prepare to get closer to the liferaft Le Cam lost sight of the liferaft and could not establish radio contact nor to pick up the signal from the AIS the range of which was reduced by the heavy seas.

He lost sight of Escoffier in the dying light but has continued to try and locate him, Le Cam is communicating regularly with Race Direction and the rescue authorities. The three other skippers are now in, or are approaching the search area.

The four skippers will follow a protocol established by Race Direction in coordination with Jean Le Cam. They will approach with three reefs in the mainsail and the engine idling. A grid search area for the zone has been established and will be carried out by the four IMOCAs who are set to provide assistance.

The PRB shore crew said that besides his AIS Mob, Kevin Escoffier also means to signal his presence in the liferaft. Daybreak tomorrow morning is around 0340hrs UTC in this zone and the search will be ongoing.

Jean Le Cam has successfully rescued Kevin Escoffier and has him on board Le Cam's IMOCA.