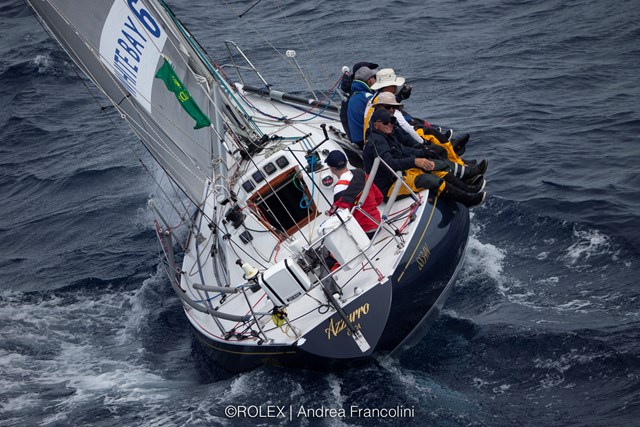 Shane Kearns is still confident that his boat White Bay 6 Azzurro can produce an upset and claim overall victory in the 2021 Rolex Sydney Hobart Yacht Race.

To claim the Tattersall Cup as the overall race winner, the Sydney yachtsman knows he has to be in by 7.05am tomorrow.

“We are on course to Tasman Island and doing 7 knots. We are very confident of reaching the finish line by 7.04am tomorrow morning,” Kearns said before the line cut out.

At the time, 41 boats were still racing in the Sydney Hobart following the arrival of James Irvine’s Mayfair that finished at 12.15pm and took 10th place on line honours.

Mayfair, a Rogers 46 Irvine purchased last year, is the smallest boat so far to finish the race.

“I am really glad to be here. It was fantastic that we put on this event, got through to the start and we finished,” Irvine said. “It is all about starting and finishing as far as I am concerned.

Asked about Mayfair’s race Irvine said: “The first night punished it on the nose… a typical Hobart start. We got through it alright, then headed down the coast and fell into a few holes.

“The boys on Mayfair worked really hard to get through them and we might have hit one too many and even coming up the Derwent was a tough gig.

“We are pretty used to offshore racing. We are pretty well geared up. It was tough, but we have seen more difficult [conditions].

“We did the Gladstone this year and saw up to 50 knots [of wind] there. We just worked through it. We have our processes and we got through it alright.”

Of his crew, Irvine smiled and said: “They are great … great crew, great people, great guys.

“We’re all from north Queensland … good bunch of blokes and a pleasure to sail with them.”

Irvine certainly enjoyed the intra-Queensland tussle between Mayfair and the Schumacher 54 Maritimo from the Gold Coast that was still racing as he spoke.

“Maritimo is always our nemesis. We always like fighting with them. They might have got us here on IRC, but it’s always good to have a good tussle with them.”

Meanwhile, spirits at sea were fluctuating as much as conditions do in any Sydney Hobart.

Bruce Taylor’s Caprice 40 Chutzpah had been slowed by the conditions.

His highly-committed perennial crew were looking good, finally, for an overall win.

It’s the one wish on the crew’s bucket list, but they were sitting this morning in little air, watching competitors catch up and their chances slip behind them.

Navigator Kingsley Piesse has 37 Sydney Hobarts behind him, 23 of them on Taylor’s various Chutzpahs. At midday, they were beyond frustrated.

“It’s been so frustrating. We were so far in front and looking at a good result. But there’s so little breeze, and boats that were 40 miles behind us, like Pretty Woman and Margaret Rintoul V, have now caught up…

Jen Linkova on the Radford 12.2 Flat White, a Two-Handed entry, was full of beans.

“We are enjoying the race more and more as we are learning how to sail her property,” she said.

“We are gaining a lot of experience and some hope to get to Hobart for the fireworks on New Years’ Eve. We are trusting in the weather forecasts.

“We lost our AIS, but then got it back. We also lost a spinnaker and a life ring.

“We have seen a sunfish, a shark, a tuna and dolphins.