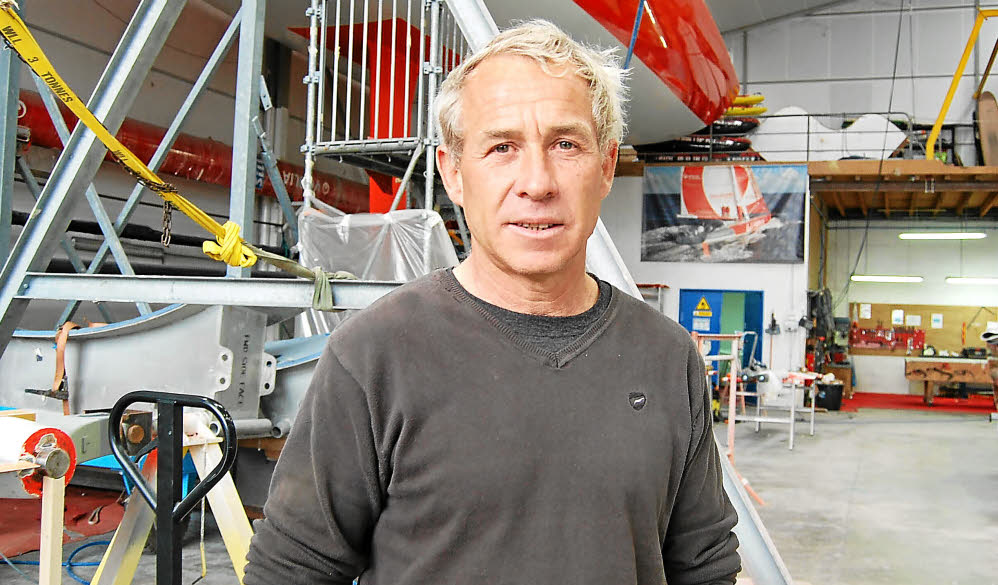 Roland Jourdain, twice winner of the Route du Rhum in the IMOCA category and third placed skipper in the 2000-2001 Vendée Globe, is certainly being kept busy. Based in Concarneau, his firm, Kaïros using its refit yards and coaching services, is involved with the IMOCA projects skippered by Yannick Bestaven (Maître CoQ), Kojiro Shiraishi (DMG Mori) and Maxime Sorel (V&B). We met up with Bilou, who is keen to pass on his skills and know-how.

A well known figure in the world of IMOCA sailing, Roland Jourdain through his Kaïros business, got his hands on the former Safran, a foiler first launched in 2015. The goal was to find partners to get another Vendée Globe project up and running for Morgan Lagravière. Unfortunately, the project did not come about.

“We gave ourselves the deadline of the end of 2018. After that, it would have been too risky financially for Kaïros to keep the boat without any guarantee for the future,” explained Roland Jourdain. “The project had everything going for it. We were well advanced in moving forward and were close to getting a signature. We got everything in place and kept at it, but we all know how haphazard it can be at times when you are looking for sponsors, and this is one of the great uncertainties in our sport. We had to abandon the idea of taking part in the Route du Rhum and then had to put the boat up for sale.”

Three serious candidates to buy the former Safran expressed their interest and in the end it was Yannick Bestaven, who was the quickest at getting out his cheque book. While the VPLP-Verdier designed boat is no longer the property of Kaïros, the business remains deeply involved in managing the boat…

Coaching shared out between Yannick Bestaven and Kojiro Shiraishi

Before the IMOCA was sold, the Japanese skipper, Kojiro Shiraishi, who is currently having a VPLP designed boat built at Multiplast, had already signed up for a two month long training programmes with Kaïros. “We were clear about the fact that the boat could be sold by then. Indeed that turned out to be the case and the boat is now in the colours of Maître CoQ. Koji, who doesn’t yet know about sailing on IMOCAs with foils, needs to train on this type of boat. While waiting for his boat to be built, he is going to be able to get used to things, so that it all comes automatically after building on a solid base, so that he can perform that much better on his new boat.”

What about the new owner, Yannick Bestaven? He too will be training for two months under the watchful eye of Roland Jourdain and the boat captain Stan Delbarre. What this really means is that Maître CoQ will be in Cascais (Portugal) in February and March, where a part-time coaching programme will be set up.

“Everyone’s a winner,” added Roland Jourdain. “That will allow the boat to be fine tuned that much more quickly. Knowing Yannick and Kojiro, they will get on well together. To start off with, we’ll do separate sessions, but we’re not excluding the idea of joint training after a while. Like Kojiro, Yannick needs to move forward and gradually discover this complicated boat and we’ll support him in getting used to her and handing her over to his shore team.”

Refit in the yard and first trip for Maxime Sorel

Another IMOCA is currently in the shed at Kaïros in Concarneau: V & B, skippered by Maxime Sorel, a newcomer to the IMOCA class. This is the boat aboard which Thomas Ruyant took part in the last Vendée Globe (a VPLP-Verdier design from 2007).

“After being forced to retire from the Route du Rhum in Class40, Maxime contacted me to find out whether we could work together,” explained Roland Jourdain. “We are currently carrying out a refit, giving the boat a thorough going over before she is relaunched in March. Maxime is due to stay with us in April to sail her for the first time. I’m pleased to be able to accompany him, as he’s a great guy, is intelligent and is investing heavily in his project.”

Roland Jourdain: “I enjoy this role of handing things over”

Kaïros is a business that is working at full pelt, with Tom Dolan and Gildas Mahé’s Figaro 3 boats also present. There are projects linked to biocomposites and it is home to the Explore endowment fund.

“The hive is full and there’s a lot going on,” added Roland Jourdain. “Our nice new pontoons are being set up, which will allow us to work on various projects in the best conditions.”

This support role is something that suits Roland, who loves the idea of spending two months sailing on an IMOCA with Yannick Bestaven and Kojiro Shiraishi.

“I started out at a sailing school, so maybe I have gone full circle,” he smiled. “I like this role of passing on know-how. I can offer my vision of the overall management of a project, which does not just involve performance out on the water. The way to aim for the final goal starts with life in your little business. You have to make the right choices, avoid getting bogged down with things that aren’t important for performance, while putting to one side things that are not so obvious, but which are essential.”