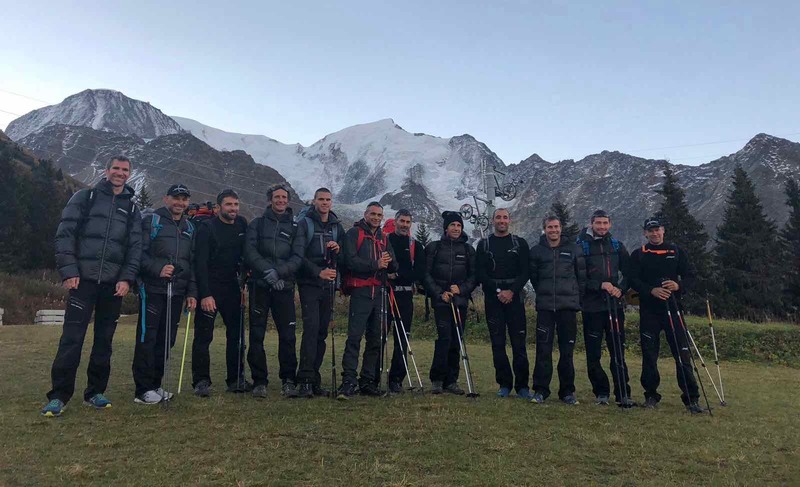 The crew of Spindrift 2 on Mont Blanc as part of their physical team preparation. Photo © Edouard Elias / Spindrift racing.

November was originally planned as the month for Spindrift racing to complete their inshore racing season and then move to standby mode for the team’s attempt on the Jules Verne Trophy. However with the M32 championship event, originally scheduled to be held in Shenzhen, China from 8-12 November, now not taking place, Spindrift racing has taken advantage of this change in the calendar to bring forward the start of standby period for the Jules Verne Trophy.

The 12-man crew of the maxi trimaran will now be on standby from 5 November, waiting for a favourable weather window to start the non-stop round the world record attempt. The current record, set by Francis Joyon in 2017, stands at 40 days, 23 hours, 30 mins and 30 seconds.

Skipper Yann Guichard has brought together a squad of 14 sailors to make up the 12-man crew. The sailors, drawn from the worlds of multihull, Olympics, match racing as well as offshore racing, include the core of the Spindrift racing team who regularly race with team founders Dona Bertarelli and Yann Guichard: Christophe Espagnon, François Morvan, Xavier Revil, Jacques Guichard and Erwan Israël.

Guichard has added to this core group the solo racing specialists Thierry Chabagny, Sam Goodchild and Erwan Le Roux, who are hugely experienced offshore onboard their respective Figaro, Class 40 and Multi 50 boats. This formidable group will be joined by three under-30 sailors: the Frenchman Benjamin Schwartz, the Australian Jackson Bouttell and Duncan Späth from Switzerland. The first two were part of the successful Dongfeng Race Team: Benjamin was in charge of electronics onshore while Jackson was an onboard bowman.

Duncan is the rookie in the team who, having followed the adventures of his mother, Dona Bertarelli, and the Spindrift team in 2015-16, then cut his teeth onboard Spindrift 2 as part of the winning crew for the 2015 Rolex Fastnet Race and the 2016 Quebec-St Malo. Thierry Duprey Du Vorsent and Morgan Lagravière join the squad as reserve crew, while Jean Yves Bernot completes the team as the onshore router.

The maxi trimaran will be based in Brest from November 5th, waiting for the right weather window to start the team’s attempt on the round the world record.