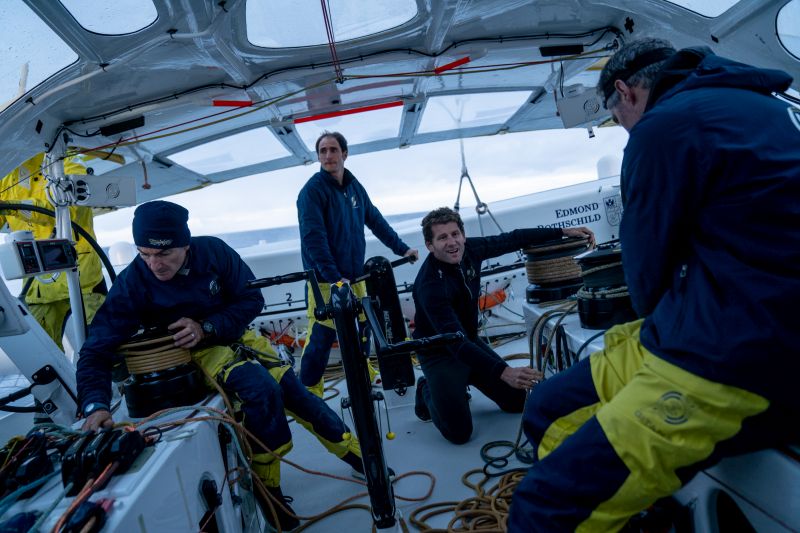 Lorient, tueday, November 24, 2020 – Record hunting is not a bed of roses, but the many variables, which have inevitably been part and parcel of life for the Gitana Team and her crew since the start of standby, were known about by one and all before they decided to take on the Jules Verne Trophy.

There are a great many expectations and the desire to see the six sailors of the Maxi Edmond de Rothschild setting sail is still intact, but the five-arrow stable’s weather cell is keeping a cool head to give itself every chance to beat the record of 40 days 23 hours and 30 minutes set by Francis Joyon and his team in 2017.

The departure, which was still being envisaged yesterday, for late in the day this Tuesday 24 November is no longer a possibility, but the team remains on code yellow as another opportunity might well present itself on Thursday.

Yesterday, by switching to code yellow, a change of colour synonymous with a possible departure offshore of the north-west tip of Brittany in 48 hours’ time, the Gitana Team had initiated the final round of preparations: PCR tests validated for everyone, loading of sailors’ provisions and their personal bags… The Maxi Edmond de Rothschild was ready to go, with everything in place for her first circumnavigation.

For all that, the weather cell comprising Franck Cammas, Charles Caudrelier, Marcel van Triest and Cyril Dardashti, was transparent: “Even though it varies a little from one model to the other, including a six-hour deal to negotiate the doldrums, there is every chance that the crew can make the southern hemisphere in 4 days and 12 hours. However, that’s where the situation becomes complicated and blurred,” explained the onshore router yesterday. “We’re faced with a very shifty situation that is evolving quickly. The danger is that we’ll miss the train and get crushed between two areas of high pressure in the South Atlantic. It poses a real threat, even though there is still a possibility of linking onto a course that takes us behind the high pressure. Right now, in this very progressive system, it’s circulating very low down in the south.”

The South Atlantic and its descent in the line of sight

The grib file forecasts, which are updated and analysed morning and evening, have unfortunately seen the trend referred to yesterday play out.

“The window is still favourable in the North Atlantic, with a passage time to the equator within the current record time held by Spindrift of under 5 days, However, the South Atlantic isn’t shaping up as we would have liked. Today, the routing isn’t just taking us on a big looped circuit to get around the Saint Helena High, which is extending out a long way to the west, it is also sending us a long way south, to around 47°, to secure a reasonable passage time at Cape Agulhas, which marks the entrance to the Indian Ocean. The detection of ice in the area must also be taken into account as that’s something we’ll have to contend with if would descend so far South…” explained Franck Cammas this morning at the end of the weather briefing.

“The models have not been very in phase over recent weeks. The differences and the scenarios vary a great deal between the European model (CEP) and the American model (GFS) and that’s currently making our work to pinpoint the right departure window rather complicated. That’s nothing new though… it’s all part of the strategy of a challenge like this,” confided Marcel van Triest.

This Tuesday 24 November could have been departure day for the men of the Maxi Edmond de Rothschild and all the team, who are supporting them in this quest for the outright round the world sailing speed record, but instead it will be another day of waiting, in the hope that the models match up and that a route opens up to release the 32-metre maxi-trimaran and her crew, who are eager to show off the true potential of the giant on a planetary scale.

Reminder of the standby codes: