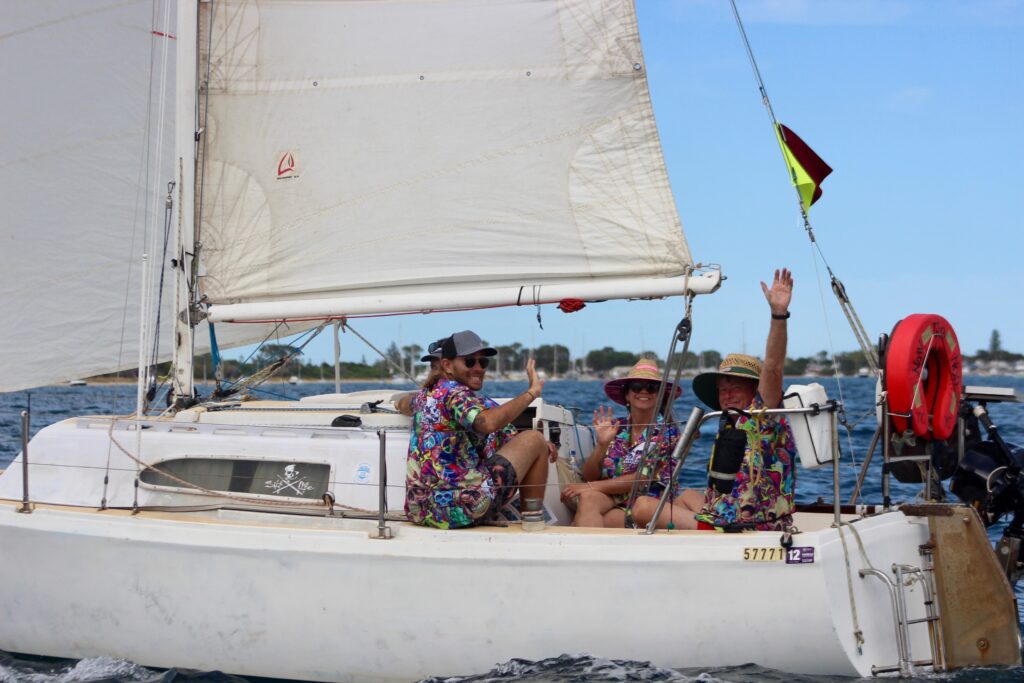 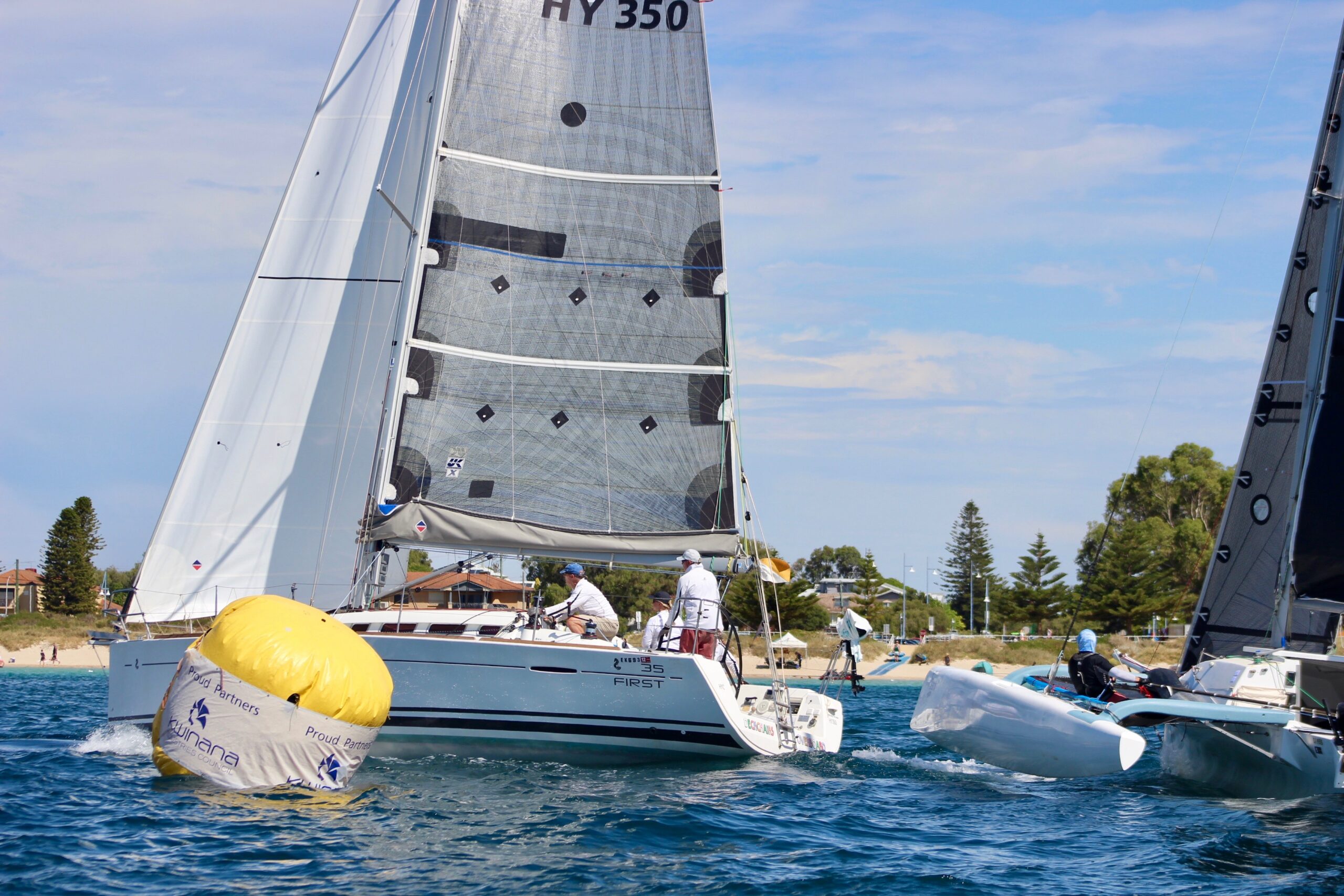 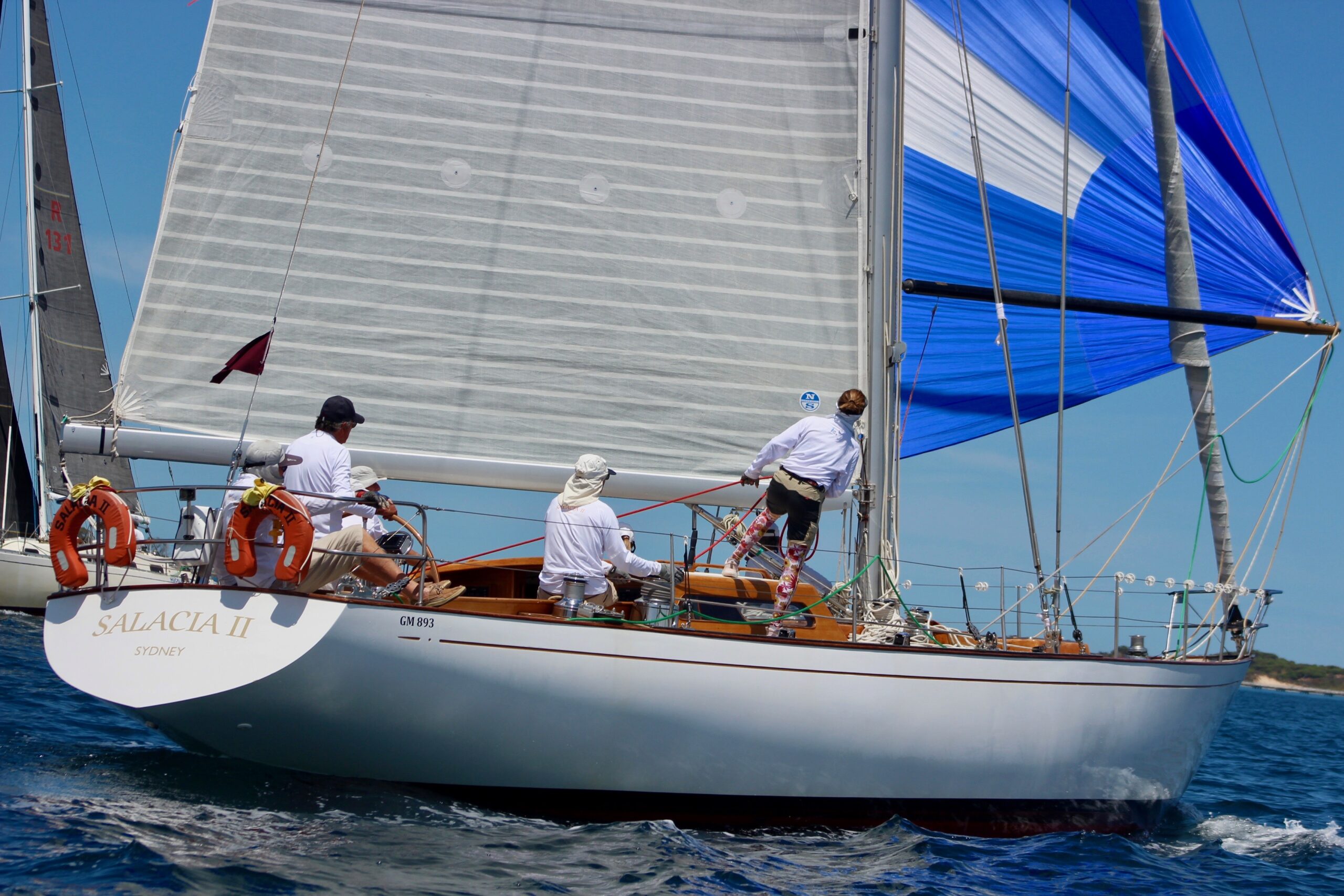 The Cockburn Sound Regatta, organised by The Cruising Yacht Club of Western Australia, is a four-day event held between Boxing Day and New Year’s Eve on the beautiful and protected waters of Mangles Bay off Rockingham.

Conditions were light and very hot for the whole regatta with the temperature reaching 44 degrees on Day 1, but the sea breeze eventually provided some welcome relief for the sailors and volunteers.

The Kwinana Industries Council Race to Rockingham is the feeder race for any metropolitan based yachts and this year 17 faced the starters gun to make the 14 nautical mile trip down from Fremantle to join the rest of the fleet.  The race started in an 18-knot north easterly breeze which eventually faded out to almost nothing. This of course favoured the faster boats and Ray Martin’s Farrier F85SR, Beatrix took advantage of the reaching course and took out both line honours and the eventual prize on adjusted time.

Fifty boats of various sizes, types and dimensions competed in the regatta this year, up from last year’s total, and included five off the beach multihulls which added a new dimension to the spectacle. The monohulls were divided into three spinnaker divisions, four ib and main classes, premier cruising who also decided to sail without kites and a sports boat fleet.

As usual, sailing consistently and making as few mistakes as possible proved to be just as important as it always has been when racing.

Anthony Kirke skippering the Botin Carkeek GP42 Enterprise NG was the fastest boat in Division 1. But the handicapping did its job and it was Zuben’ubi skippered by Alan Anderson who took out first prize, from Ross Norgard’s Salacia II and Sagacious IV skippered by Chris Hind. Zuben’ubi also went very close to winning the prize for overall champion. Enterprise dominated the fleet on IRC to win every race and also the prize for best dressed shore crew. They were obviously practising for their appearance at next year’s Sydney Hobart Race fashion shoot.

Division 2 was very close with four-points separating the first three boats.  Phil Slee made the trip up from Bunbury with Miss Behavin winning from the local boat, Vintage Red skippered by new member Michael Gillum.  The conditions obviously suited the two S80s. Jolie Breeze, skippered by David Hepburn was third.

Division 3 was really close. There was one point between first and fourth. It was Sam Threlfall’s Lady Irene who prevailed by that one point from Kevin Sneddon’s Six Pak and Matt Rose’s Spacesailer 27, King Canute. Steve Morris on Freedom was an unlucky fourth, with those places being determined on countback.

The jib and main entrants were divided into three fleets and in JAM 1, Twitch, skippered by Betty Walsh in Barry’s absence, was well sailed to win from Neil Harrison sailing Deckchairs Overboard and Jason Poutsma on Stimulus Package.  The latter also won the prize for the IRC Division.

In JAM 2, Kevin Schroeder sailed Dragonheart to the win from Kim Klaka’s consistently performing Panache II.  It was great to see what was formerly a local boat in Dragonheart, making a reappearance on Mangles Bay.  Third place went to Mark Nicholas on K-Factor.

JAM 3 was another close fleet.  Local member John Brabazon collected a new sail for Christmas for his boat Rose, and proceeded to win on countback from the Mandurah Spacesailer 27 Pegasus, skippered by Mark Barrett. Mark beat his fellow club member Ross Davidson, sailing Legend, into third place by just one point. Naw the Noo, skippered by Dave Reid, finished a further two points back in fourth but was awarded the prize for best dressed crew on the water for their Hawaiian themed outfits.

The premier cruising fleet was sailed under no spinnaker conditions this year and Ian Joel’s Dixon design Jubilant dominated the racing to win the division. Serendipity, skippered by Rick Hoad was second, beating the early pacesetter Eclipse sailed by Max Palleschi.

The Sports Boats again provided probably the most interesting and close match racing with the Elliot 7 Tiger, skippered by Gavin Taylor, returning to winning form and beating local sailer Trevor Taylor sailing No Etiquette into second place with Michael Jones on Pretty Woman coming in third.  With the light conditions there was often only a few seconds separating the boats and the starts were crucial, particularly for the short Windward/Leeward courses.

This year we were re-joined by some off the beach catamarans and spectators were treated to the sight of a catamaran getting up out of the water on foils and seeming to fly above it. Flying Circus skippered by Ryan Duffield was a clear winner from Darren Smith’s Blew by you and Trevor Hughes’ Budgie Smuggler.

The Overall regatta champion is determined by a formula taking into account a boat’s gross points score and the sum of the total numbers of boats starting in each race in each division.  It was very close between Jubilant, Zuben’ubi and Twitch but in the end, it was Ian Joel and his crew aboard Jubilant who prevailed  to take out the prize.

Representing the visiting and local sailors, Ian paid tribute to Chairperson Sonia Mason and her vast army of volunteers for running another successful regatta under trying circumstances. There had been a COVID scare in WA just prior to Christmas and the event had to be run under new restrictions.