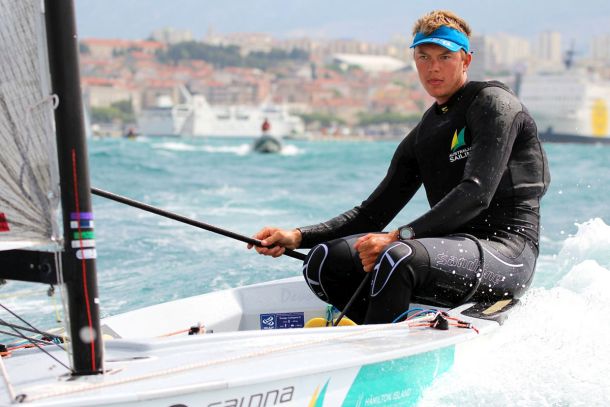 Josh Junior (NZL) has reclaimed the lead at the Finn European Championship in Split, Croatia after three tough races in winds from 18-24 knots. Ivan Kljakovic Gaspic (CRO) had the best day to climb up to second, while Vasilij Zbogar (SLO) staged a comeback to climb from 15th to third. Race wins went to Ed Wright (GBR), Junior and Deniss Karpak (EST).

It was always going to be the 'big' day in Split, but it wasn't as large as some expected. With some forecasts showing 35 knots and more, racing was held on the inshore course. As it turned out the big winds only arrived after the fleet came ashore, and for the large part the racing was held in an average of 20 knots. Even so the fleet had to contend with big waves and tough racing conditions.

Race 5 seemed to belong to Pieter-Jan Postma (NED) from start to finish. Favouring the left hand side close to the shore he emerged from the chop with a nice lead at the top mark and blasted away downwind never to be caught. The British pair of Ed Wright (GBR) and Ben Cornish (GBR) were leading the chasing pack some way back. However both Postma and Cornish were judged over the line early and scored UFD, so the race win went to Wright from Ivan Kljakovic Gaspic (CRO) and Vasilij Zbogar (SLO).

For the next race the wind dropped slightly but followed a similar pattern. Alejandro Foglia (URU) led round the top mark from Josh Junior (NZL). Junior was soon in the lead and went on to win his third race of the championship. Kljakovic Gaspic also passed Foglia to place second in the race.

Junior looked to be heading for yet another race victory in race 7, leading round the top mark from Deniss Karpak (EST), Giorgio Poggi (ITA) and Kljakovic Gaspic. In contrast to the first two races, the middle and right were now paying with those who stuck to the left again trailing at the top mark. Junior led until the final upwind mark when Karpak spotted some incoming pressure and dived low to the left and sailed underneath Junior to take a narrow victory on the line. Poggi crossed in third, with Kljakovic Gaspic ending a great day with a fourth.

Junior said, “Very spectacular day. There were some good close battles with everyone. I need to keep getting good results like that. There are a lot of good sailors here so I just have to keep sailing well, but Ivan is sailing very well.”

On his tactics for the day, “There was close to a knot of current running between the island and the land and I think to start with inshore there was less current and also a geographical effect on the left as you got near the top mark. As the day went on it paid to go left early and then cross to the right.”

Wright wasn't so happy with his day, but climbs two places to fifth “After the first race when the land got hot we had anything from 6-25 knots which kept the fleet entertained. I managed to win the first which I was extremely happy with and then made some average decisions in the other two.”

Foglia is one of the Finn class sponsored sailors at the Dinghy Academy in Valencia. He led round the top mark in race 6. He said of his day, “I am happy with how I am going, but I didn't have a good start to the week and lost a lot of points on the first days. The important things is that I am there with the speed and am up with the top sailors. This is only my second year in the Finn. We are sailing well in Valencia having fun and learning all the time.”

“In the second race today I managed a very good start at the pin and tacked at the right moment to the right, and then came into the mark first from Josh, but he was flying downwind and passed me. On the second upwind I kept my second place but Bambi also passed me on the last downwind. Third is a good result but when you are first and lose some places, you are happy because of the result but also not happy to lose first place because you want to win.”

Karpak has now won two races this week and is up to tenth overall. “In the first two races I started in the middle and all the leaders came from the pin after one tack. In the last race it was more tactical, with the wind going right and left. Myself and Josh and Giorgio went super fast to the right for about a minute and then when we came back we had everyone in the window, so that was nice. I didn't have a good first downwind, but it was an easy second upwind. On the last downwind I saw some more pressure on the left and went for it Laser style with no pumping and took the pressure. When I looked up everyone was behind me. If you have more wind that others, you go faster.” Simple.

Home favourite, Kljakovic Gaspic, is now up to second and looking for his third European title. He said, “It was fun, a windy, breezy day and lots of nice moments for sailing. I was looking forward to today but I wasn't sure whether it was going to be too much. I understand why they put the course inshore because the forecast was showing a really, really breezy day. Normally in that area there is a little less wind, but at least it keeps all the options open, and is the same for everyone.”

“So it in the end it turned out to be a really wonderful day. We had nice surfing downwind, with nice waves. Upwind was fun. It wasn't about banging the corners, it was sometimes left, sometimes right, so fun racing. I'm up to second, so let's see what happens tomorrow.”

The current leader in the Junior Championship, Arkadiy Kistanov (RUS), lost his overall lead in the Seniors, but despite a high scoring day still leads the defending junior champion Jake Lilley (AUS) by nine points. Nenad Bugarin (CRO) also struggled in the higher winds and dropped to 19th overall, but is still the third placed junior.

Lilley described his day, “It's been a pretty tricky week so far in a variety of conditions and I have just been trying to stay consistent. I managed to do that so far until the second race today when I didn't have the best race and didn't really recover from it like I have been able to do most of this week. The first race and third race today were pretty good. The third one was a just a war of attrition. Everyone was pretty tired by then.”

On the defence of his European Junior tile, “I am starting to close the gap on the Russian. Three more races tomorrow before the medal race so still plenty to play for.”

There is just one day of the opening series left and a possible three races to sail on Saturday. Junior and Kljakovic Gaspic have a 30 point gap on the fleet, though the rest of the top ten remain very close on points, especially for those hoping to make the medal race on Sunday.

Forecasts vary for Saturday, from nothing to something sailable. Racing is scheduled to resume at 12.00.