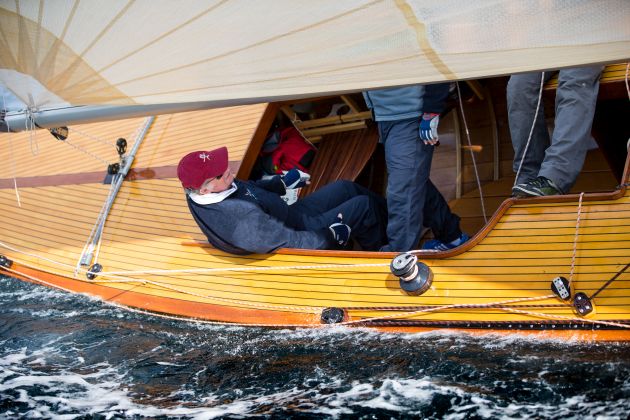 H.M. King Juan Carlos was in Sanxenxo (Pontevedra), where he took his first sail on board José Cusi’s new “Bribon”, a classic 11-metre boat, acquired approximately a month ago in Loviissa (Finland).

“Bribon” and “Acacia” have been docked in the port of Sanxenxo since Tuesday, and the King arrived at the Royal Club Náutico on Saturday at around midday, where his fellow crew mates Pedro Campos, Alberto Viejo, Roi Álvarez, and Luis Saenz among others were awaiting him.

Formerly sailing as “Ian”, the monarch’s new boat is a classic 6mR class, which became popular between the 1920s and 1940s, and was even an olympic class until the Helsinki Olympic Games in 1952. There are only 500 of its kind worldwide, of which just one hundred are still competitive, or have been maintained respecting the original design.

Mauricio Sánchez-Bella, the owner of “Acacia”, the twin of the new “Bribon,” is the boat which His Majesty King Juan Carlos competed on in Sanxenxo last month following a seven-year absence from competition. Along with José Cusí and Pedro Campos, he was one of the people to have travelled with the monarch to Finland, and explains why the choice was “Ian,”

“We were looking for a boat which was as close as possible to the’Acacia,’ and both mine and the new ‘Bribon’ are by the same designer, built in the same year and at the same boatyard.”

“She is an absolute gem. Fully varnished, well-maintained and reconstructed with utmost fidelity, she has a modern and really competitive sailing rig and steering system. Everyone’s reaction on seeing the boat was very positive. It was in impeccable condition, and the kind that you don't often find up for sail, so was a very attractive option,” he explained. 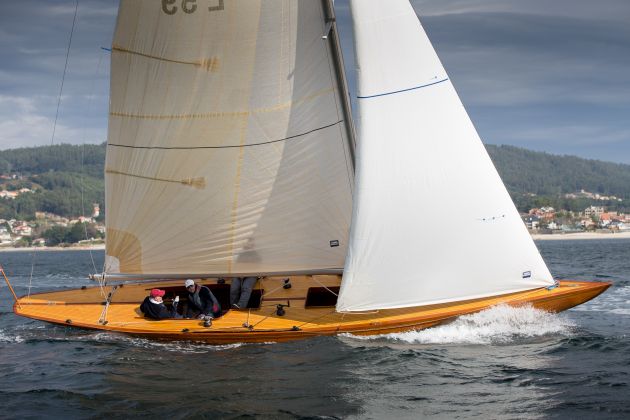 Although it may appear to be quite the contrary, Mauricio Sánchez-Bella explains that these boats are not only wonderfully competitive, but also hold great historical significance,

“There are people who believe that this boat is a recreational craft, and it isn't the case. It is extremely competitive. He (H.M) is a tremendous fan of regattas, and boats of this kind offer the perfect combination of competitiveness, and the conservation of cultural heritage. It was this possibility of being able to maintain the competitive aspect whilst safeguarding a sailing masterpiece, which was what most attracted King Juan Carlos.”

A reunion after 86 years

Yet Sanxenxo on Saturday was also home to a particularly special and practically unheard of event: the two twin boats active on the water (both the “Acacia” and “Bribon”), and reunited after 86 years apart.

“After more than 80 years, to find two equal boats reunited, each which has lived a completely different life, is quite unique,” pointed out Sánchez-Bella.

In fact, in the world of classic sailing, the reunion of the two boats has created a great deal of interest.

“People have written to us and called from many countries, asking to see photos of the boats together, because it really is quite a big event within the 6mR sailing world,” added the owner of “Acacia.”

Both boats were designed by Gustaf Estlander, one of the most successful naval architects in the XX century. The Allende family from Bilbao, who for generations were particularly close in the world of sailing, commissioned the construction of the “Acacia,” and Estlander, “drew up plans for them both with the idea of keeping ‘Ian’, yet he passed away the following year, and never got to sail it.”

Following their construction in Gothenburg in 1929, at the Swedish boatyard Abrahamsson & Son, the lives of the two boats took different paths: one came straight to Spain, and the other stayed in the north of Europe.

To date, the former “Ian” has had approximately five owners, curiously the same number as its twin, “Acacia.”

Its last owner was Finnish businessman Michael Cedercreutz, the owner of “Ian” for 11 years. “In the last three years he no longer sailed, and put the boat up for sail for personal reasons. Yet when he sold it, it was with tears in his eyes, it was very emotional,” describes Mauricio Sánchez-Bella.

It is the emotional component, which quite probably differentiates a classic boat from others. And in this respect the parallel between the two twins continues:“The Cuyàs family was the owner of ‘Acacia’ for longer. They thought that this one had sunk, but then they discovered online that it had been reconstructed. They called us and came to Vigo to see it, because it was the boat they had sailed on as children with their father. They were really excited.”

Two separate lives, yet with so many parallel factors, that were finally reunited in Sanxenxo. 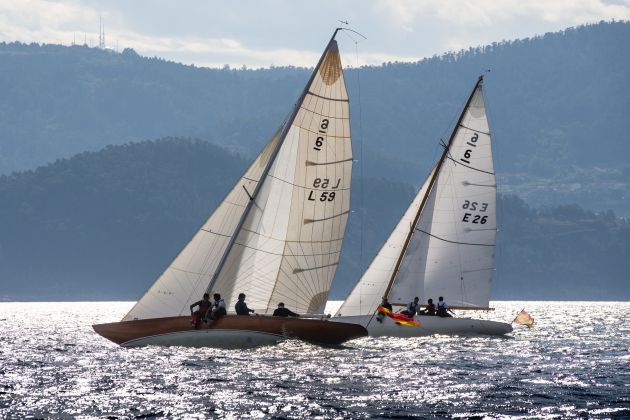