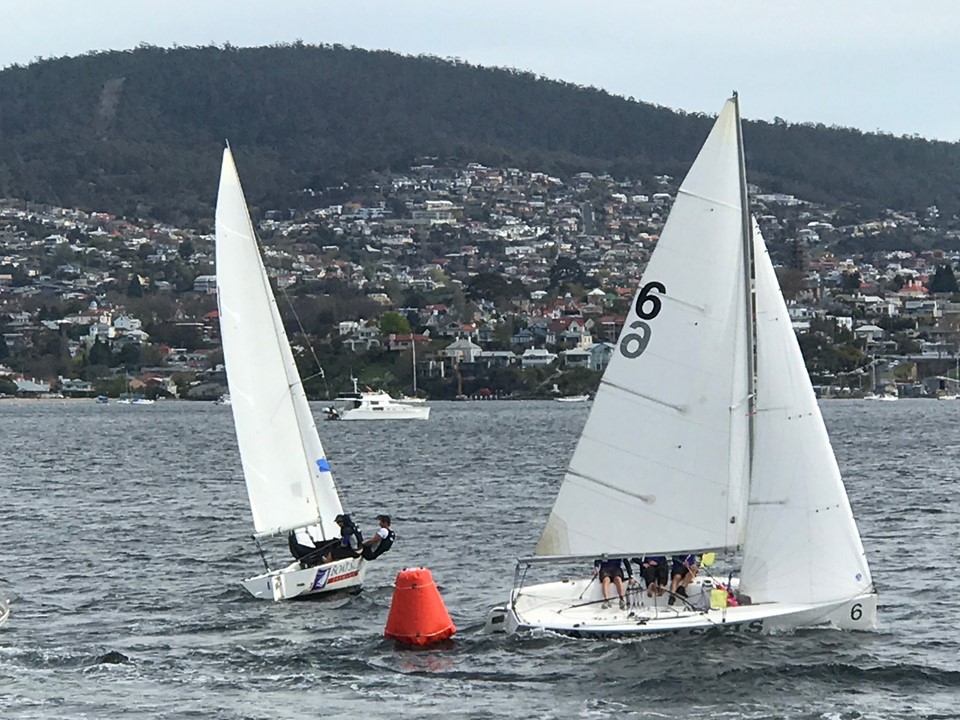 Jordan Reece, head coach of the Cruising Yacht Club of Australia’s Youth Sailing Academy, today showed that he, personally, has the match racing skills that he has been imparting to Academy students.

Returning to the helm for the first time in six years, Reece won the Australian Open Match Racing Championship on Hobart’s River Derwent, albeit beating Sydney rival David Chapman on a countback at the end of weekend of frustrating, but close match racing between teams representing the Royal Sydney Yacht Squadron, Royal Yacht Club of Tasmania and the Cruising Yacht Club of Australia.

Early this afternoon Reece and Chapman each had won six matches in the round-robin and each had won his semi-finals, but the final never saw the much-anticipated contest between these two noted young match racing experts and tacticians, both past winners of the prestigious Hardy Cup on Sydney Harbour.

Frustrated by wind shifts, the race committee finally naming Reece as the Australian champion on a countback.

Conditions had, in fact, been frustrating throughout the long weekend. Light winds, followed by mountain-based gusts reaching 40 knots, limited racing on Friday to 15 matches; on day two lack of breeze on the river saw just five matches completed.

Today, a moderate morning breeze finally enabled RYCT race officers to complete the round robin soon after midday and, as race officer Nick Hutton optimistically commented “with an ounce of luck the finals will be completed before the 15:00 hours deadline.” No so! “With a couple of breakdowns and lots of wind shifts, 15:00 arrived before we had completed even one race in either the final or the petit final,” he later recalled.

Earlier, the semi-finals went all the way with Jordan Reece narrowly defeating his fellow CYCA skipper Finn Tapper 2-1 in hard-fought series. “Likewise, on the other side of the draw it was a Federer – Nadal style clash between James Hodgson (CYCA) and David Chapman, representing both the RYCT and RSYS, with Chapman having a few too many aces in the end, winning 2-1, “ Hutton commented at the end of the day.

“On to the final! But at that stage another 90 degrees shift came off the mountain with a bit of rain,” Hutton said. “This was followed by what proved to be a short-lived move to the south, completing the 180 degrees transition from the prevailing northerly of about 18-20 knots.

“And then 15:00 arrived, after which the Race Committee were obliged to pull up stumps, declaring Jordan Reece and his crew (Murray Jones and Harry Price) from the CYCA the winners, followed by David Chapman (crew Finn Alexander and Finn Dagge) from the RYCT/RSYS on countback, having been tied after the semis,” Hutton explained.

The immediate future for the two Australian match racing finalists?

Jordon Reece is heading back to the CYCA to prepare for the Australian Youth Match Racing Championship which the Club is hosting on Sydney Harbour in a couple of weeks, commenting: “We had some great racing but overall it was a frustrating weekend.”

David Chapman flies to the USA tomorrow to race in the Farr 40 worlds at Long Beach, California, as tactician for Sydney yachtsman Chris Way, commenting before he left Hobart: “Thank you all fellow yachties who came out to watch this great match racing event on the Derwent….I was proud to be able represent both the RYCT and the RSYS.”