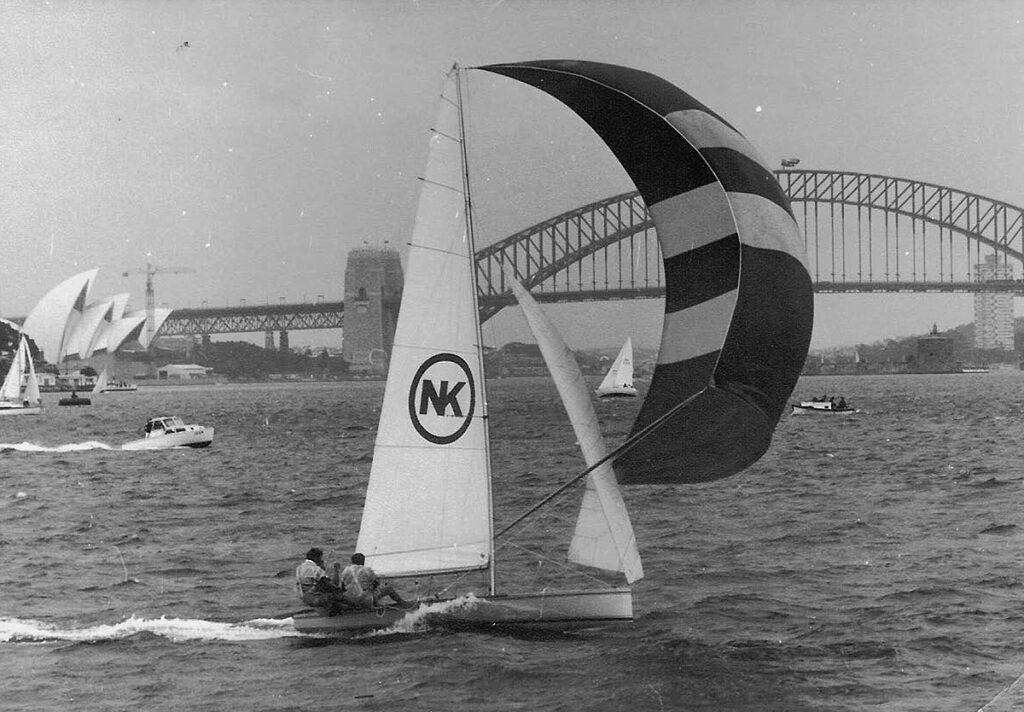 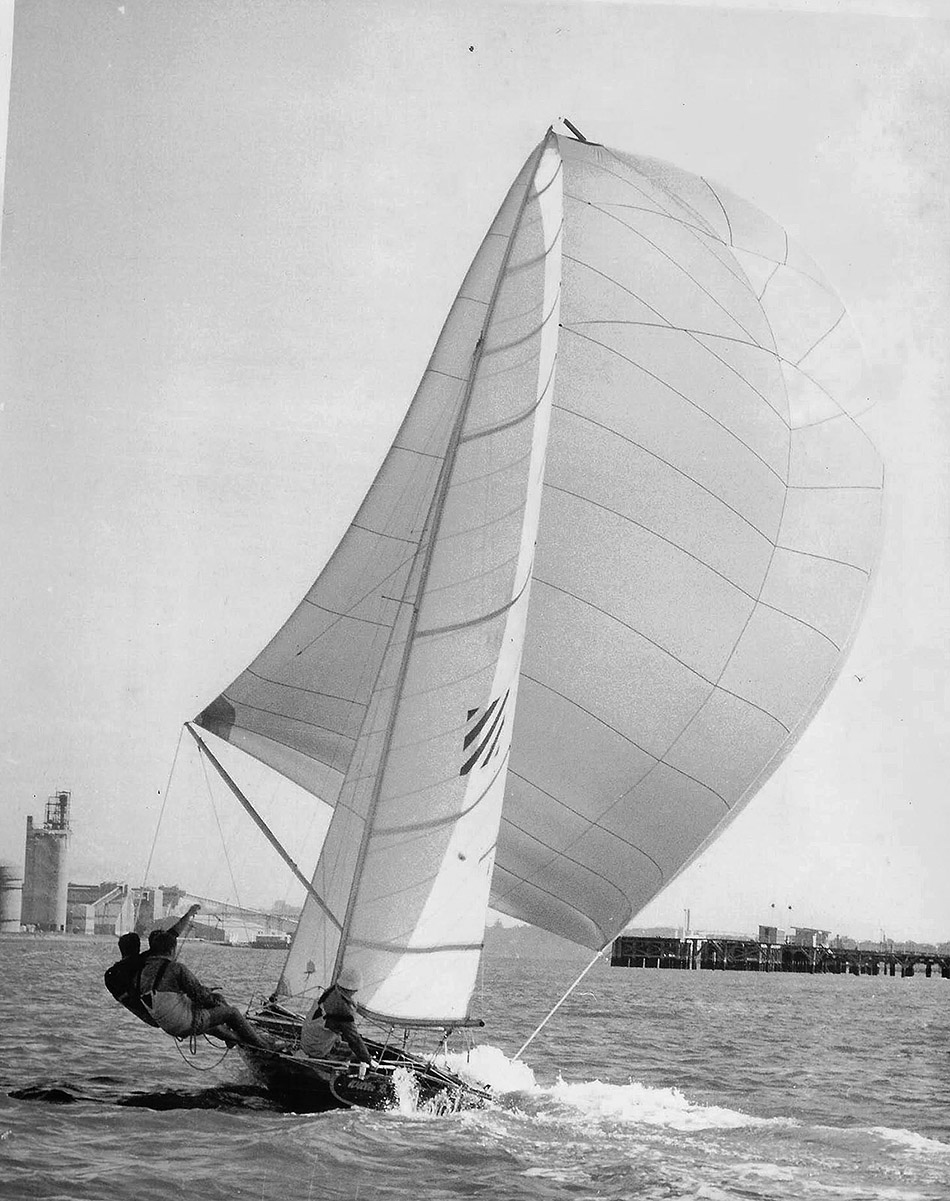 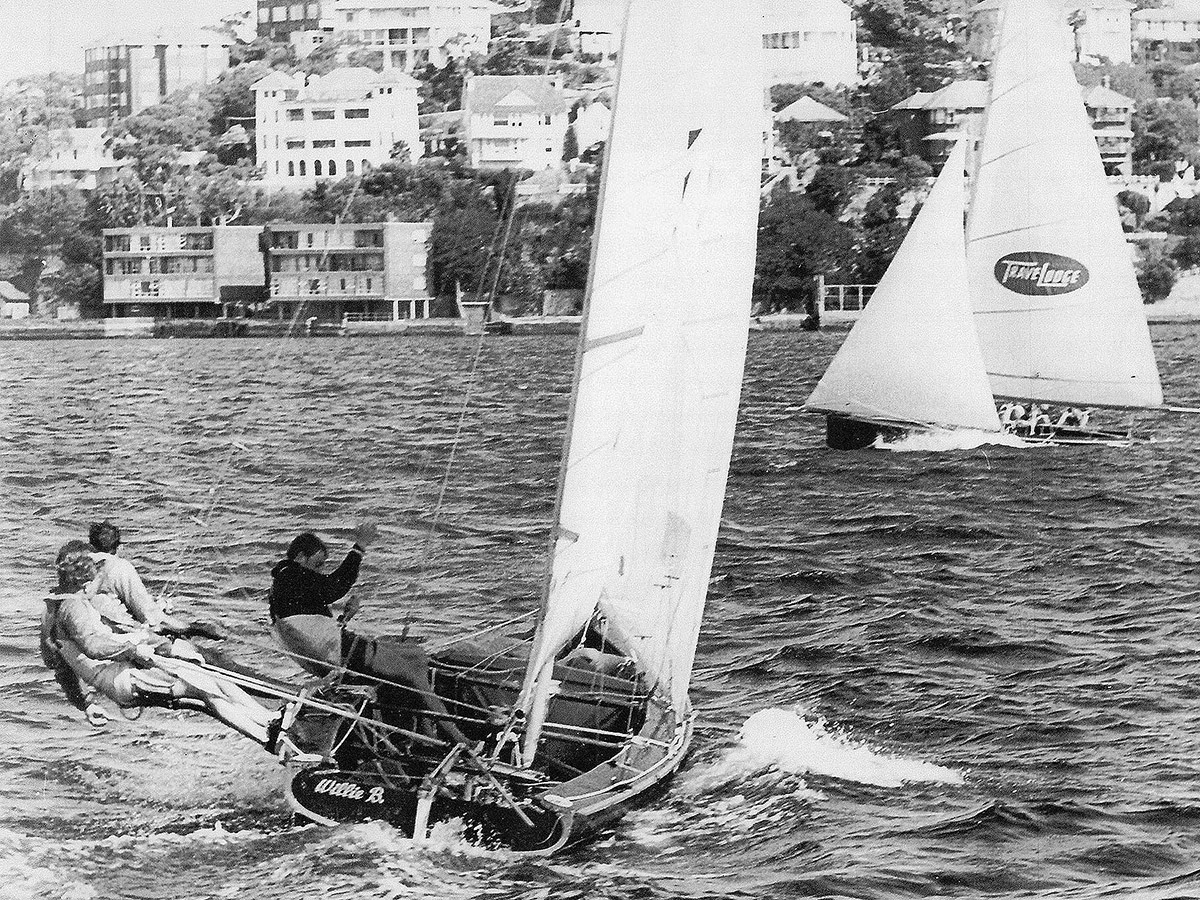 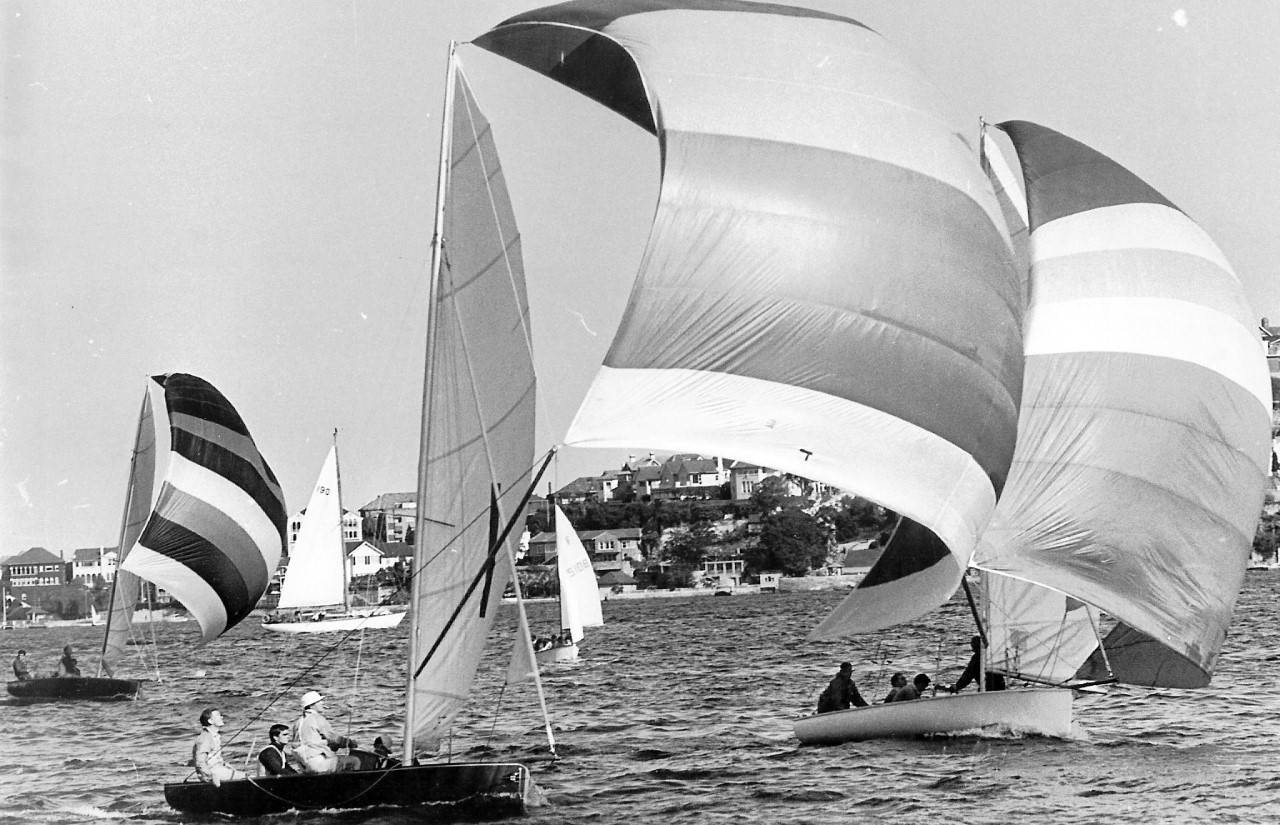 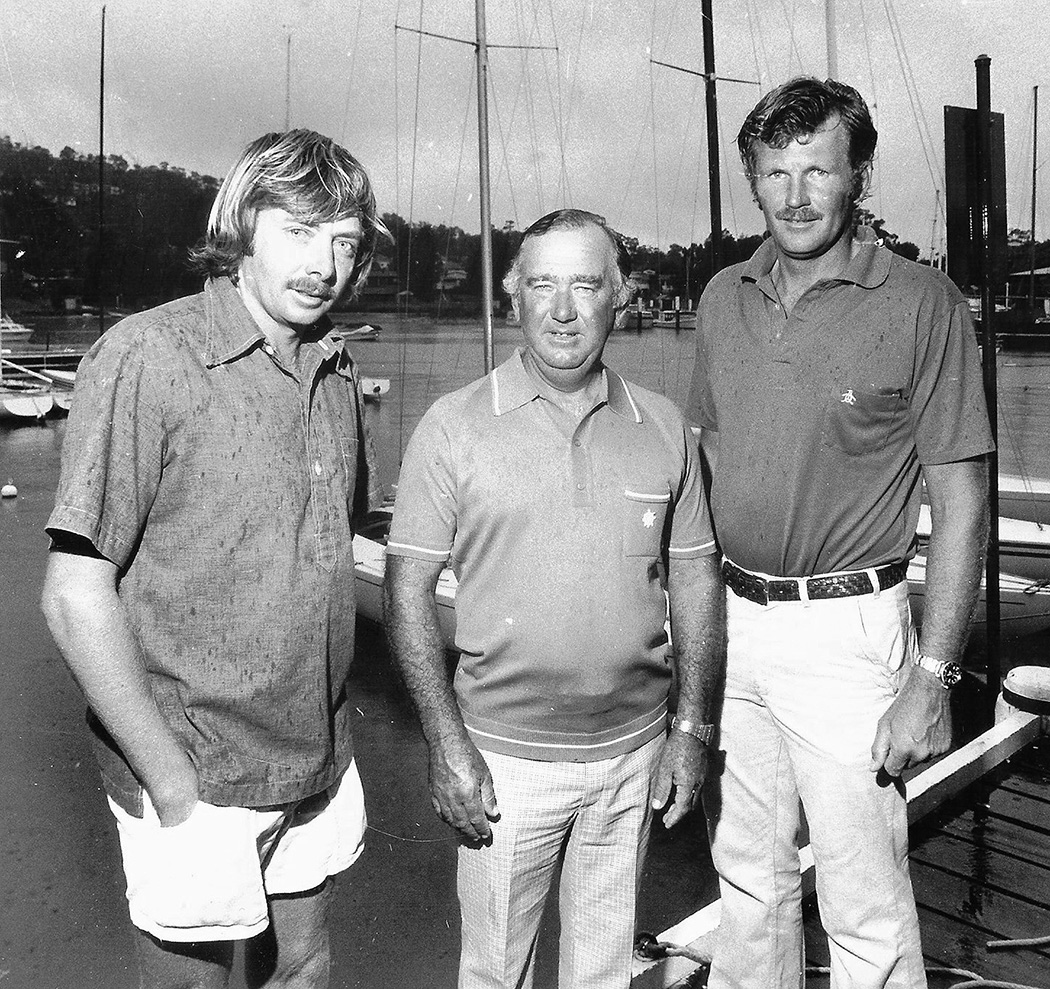 Since the birth of the 18 footer class on Sydney Harbour in January 1892, there has been an incredible number of stories about the competitors, the clubs, the rules, the boats, supporters and sponsors during the following 130 years.

Realising the importance of the sport’s history, the two Sydney 18 footer clubs’ administrators are actively engaged in trying to preserve as much of this history as possible and are fortunate to have the support of the sport’s leading historian, John ‘Steamer’ Stanley to accomplish the task.

‘Steamer’ is not only a top-quality historian who acts with skilful devotion, he is a former Australian 18 footer champion sailor as well as a highly experienced international champion yachtsman.

John’s knowledge and experience, however, could have been lost back in 1998 had he not amazingly survived the ill-fated Sydney-Hobart Race which claimed the lives of three of his crew mates.

John arrived in Sydney (from Queensland) as a six-year-old and used to sit on the beach near Middle Harbour Skiff Club and watch the boats go racing, and he “wanted to play the game”.

His first sail on a 16 Footer was with Jim O’Rourke, a former Australian 16 Footer champion.  John remembers, “It was a 30-knot westerly.  I was the bailer boy and I think I bailed Middle Harbour twice that day, and I loved it.”

After one season sailing in the B-class fleet, Ken Beashel asked him to become his light weather hand on Elvina Bay, which went on to finish third in the 1963-1964 Australian Championship at Perth.

John has fond memories of his experience in the 16s, “I was lucky to sail with some of the best competitors the club ever had.  The next step was to move from the 16s to the 18, and I wanted to be the best forward hand going around.”

John recalls, “Rod Zemanek asked me to sail on his 18 footer Minamit in 1967-68, then the following year we moved onto a brand-new skiff, named Willie B, which was the first 18 to sail with four on the wire.  We were runner-up in both the 1969 and 1970 Giltinan Championships but won the 1969-1970 Australian Championship on the Brisbane River.”

At the 1969 Giltinan Championship, John was part of history himself when Willie B and TraveLodge were tied after the five regular races and the first sail-off in the championship’s history was required to decide the champion. It was a controversial regatta, particularly as a protest against the Race 3 winner, Willie B, was the reason for the sail-off.

After the two seasons on Willie B, John said, “I heard Dave Porter was getting an 18 for the 1970-71 season, so I rang him and asked if he wanted a forward hand.  He said he would call me back, he did, and he said yes.”

Ian Perdriau built a beautiful-looking boat, which raced as Aussie. John recalls: “The boat was a rocket ship and we won the NSW title.  Unfortunately, that season was the last which had a rule that stated that when the top of the mast hit the water you were ruled out. It cost us both the Australian and Giltinan championships.”

In 1971-72, John moved on to join Denis Lehany on a new boat, originally named Electric Indian then, with sponsorship, was late re-named Nock & Kirby, and won the Australian Championship on the Brisbane River.

While on Ballyhoo during the Transpac race to Hawaii, John ‘Woody’ Winning mentioned he was going to sail an 18 in the next season and Steamer told ‘Woody’ he could get Ian Perdriau to make a comeback and sail on the sheet.

When ‘Woody’ came into the 18s, with sponsorship from Travelodge, in 1974-75 neither one had the time necessary to do justice to a top campaign, so ‘Steamer’ decided to leave the team after only a few weeks.

He had already done some sailing on the bigger boats, and decided to concentrate his efforts to a variety of classes and high-profile events rather than staying in the 18s.

In 1976, he joined Bruce Ritchie in the Etchell class and won the Australian Championship, which gave the team a trip to contest the world title in Newport, Rhode Island, where they finished in third place.  John then flew to San Francisco for The Big Boat Series which he won on Ballyhoo.

Over the next year he sailed on Ragamuffin I, II and III and competed in the Admirals Cup in England, then joined Tom Stephenson on the One Tonner B195, which won the Australian Championship.

The 1977 world E22 championship was sailed off Palm Beach (Sydney) so John talked Frank Tolhurst into buying an Etchell 22 and, along with Norm Hyett, the team became the first Australian to win the world title.

Next, Marshall Phillips bought Big Schott, the Peterson two tonner, and John, with a delivery crew, sailed from San Diego to Hawaii to join Ragamuffin and Magic Pudding (ex B195) to win the first Pan Am Clipper Cup for Australia.  He then joined Hugh Treharne’s Quarter Tonner, Seaply, and won the Australian Championship.  The team later went to Japan and finished third in the world title.

John’s incredible value to the two Sydney 18 footer clubs could have been lost forever had he met the same misfortune as three of his Winston Churchill crew mates in the Ill-fated 1998 Sydney-Hobart Yacht Race, which was struck by a superstorm, with winds in excess of 65 knots, and gusts up to 80 knots.

Six sailors died, five yachts sank, more than 60 yachts retired and 55 participants had to be rescued by helicopter.  Of the 115 yachts that started only 44 finished.  It required Australia’s largest-ever peacetime rescue operation

The Winston Churchill nine-man crew was in the fight of their lives, hammered by 70-knot winds and 20-metre-high waves.  The 55-foot boat was completely disabled and the only course of action was to abandon ship.  The nine crew members took to two life rafts which were literally bounced around like beach balls in the wild seas.

Three of Steamer’s mates were washed away.  “I yelled out ‘are you all there’ and I only heard only one person answer.”  Twenty-eight hours after they abandoned ship, the Winston Churchill’s life raft was spotted and Stanley and John Gibson were rescued.

Rescue crewman on the Helimed One chopper told the media, “The sea state was growing more chaotic and we went from relatively small seas to wave heights anywhere from 20 to 80 feet high, wind gusts up to 160 kilometres an hour, so by the time we got out there we just thought it was impossible.”

Of the six sailors who died, John Dean, James Lawler and Michael Bannister were off the 25 tonnes Winston Churchill.

John Steamer Stanley was later interviewed by the TV program A Current Affair in his hospital bed and told of the ordeal.

“It was nothing out of the ordinary, then it just slowly developed into what we ended with, which was a disaster.”

“There was roaring noise, just roaring noise …, incredible wind …, it was just unbelievable … hard to describe in a lot of ways … deafening as well.  It literally picked up the boat, which is 25 tonnes, and threw it into the sea in front.”

“You can’t punch through a wave that’s probably around 70-foot-high and then when you got to the top it breaks … you’ve got no show.”

“We went up … we travelled up a big wave, enormous wave, and it broke and then just, I hung on, held my breath and that seemed to go for a long, long time.  There was no warning about what was going to happen … it just happened.”

The remarkable story of John ‘Steamer’ Stanley and his fight against the storm of the decade in the 1998 Sydney to Hobart Race is told, by Stuart Diver, in a must-listen podcast called The Elements, Water: Sydney to Hobart Yacht Disaster.

A year later, John was invited to go for a sail with John Winning and Bob Joy on a replica of the famous Aberdare, of the 1930s, and immediately fell in love with the boat.  Once his long-time friend, John ‘Woody’ Winning decided to build six replicas, a fleet began to race each week on Sydney Harbour, and the pair have become the driving force behind the ‘Historical 18s’ class.

John Stanley later became President of the Sydney Flying Squadron and immediately noted that the club’s century-old history had been neglected, and in typical ‘Steamer’ style, decided that he was going to remedy the situation.  Over the past two decades, he has been relentless in his pursuit of as much skiff history as possible and was a driving force behind Robin Elliott’s magnificent ‘Galloping Ghost’ publication, which covered the 18s history from 1890-1965.

John tells his story of determination.

“After sailing in the replicas, I could then relate to all the old pictures of famous 18 footers and really appreciated how good those sailors were with the equipment they used.”

“I was lucky to grow up in an era of development and amateurism, sailing with people 10 to 20 years older than me, who became my mentors.  I realise that we need to keep their memory alive, as well as the memory of those who were before them.”

Somebody ‘upstairs’ must have been watching over John during that horrific ordeal in 1998 and realised that the 18 footers needed someone with the ability and determination required to preserve the history of the fantastic Australian 18 footers.

John Steamer Stanley has a word of advice to all sailing clubs, “if you don’t know where you’ve been, you will never know where you are going.”

The annual Supercup race, featuring many past 18ft Skiff champions, will be conducted on Sydney Harbour next Friday (December 10).

Race 4 of the Australian 18 Footers League’s Club Championship, will be conducted next Sunday (December 12).

Spectators can follow both races on board the club’s spectator ferry, however due to the COVID-19 policy, numbers are limited.  Booking online through the club’s website www.18footers.com is essential.