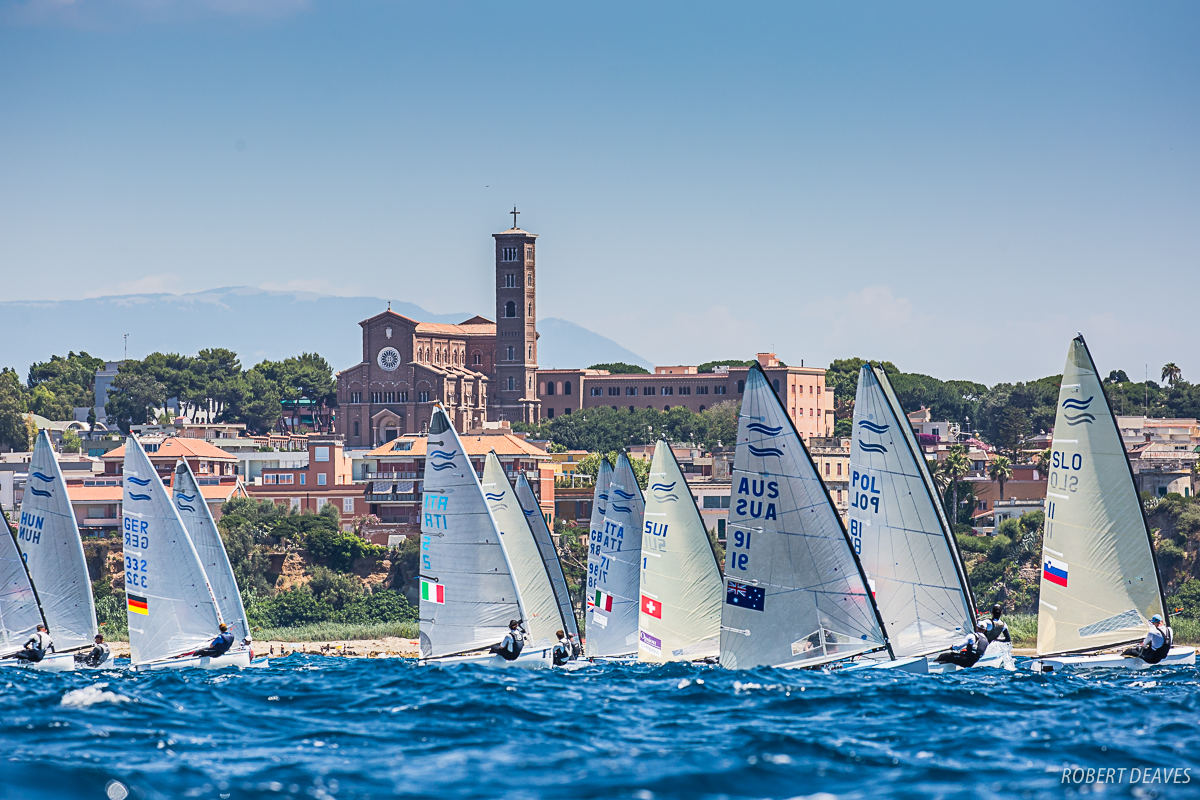 Race 4 off the Anzio shoreline at the Finn Silver Cup 2019. Photo Robert Deaves.

Joan Cardona, from Spain, holds a three-point lead at the 2019 U23 Finn World Championship for the Jorg Bruder Finn Silver Cup in Anzio, Italy, as the event passes the half way stage. Six races are done, with five to go. Oskari Muhonen, from Finland, is second while day-one leader Nils Theuninck, from Switzerland is down to third. The race wins on the second day went to Cardona, Johannes Pettersson, from Sweden and Federico Colaninno, from Italy.

It was another scorching hot day in Anzio, with a hot onshore breeze producing some hot competition among the 28 young Finn hopefuls. Most of the day was sailed in under 10 knots with limited chances for the bigger sailors to gain downwind with free pumping.

The best performances of the day were from Cardona and from 20-year-old Colaninno, each amassing just seven points from three quite tough races. Colaninno was fastest to the top mark all day, but was not quite so fast downwind, letting through some of the older sailors.

He said, “A perfect day in Anzio with pretty light winds, more or less 10 knots. And I had real fun with a 3,3,1 with really good speed upwind, and a bit less downwind but it’s OK. So lots of fun.”

He has already won the U19 title twice and is now battling for the U23 with several sailors who have serious chances of making it to Tokyo 2020. Colaninno is currently the top Italian Finn sailor and will certainly try to qualify Italy for Tokyo at the final qualification event for European sailors in Genoa next year.

“The main goal now is Tokyo 2020, which will be pretty difficult as I am one of the youngest sailors in the fleet now, but I will try to do it in Genoa in 2020.”

“I am pretty disappointed that Finn is out for Paris 2024. There are no opportunities for people like me at 96 kg and 2 metres tall.”

With emotion in his voice, he stated “With the Finn out of the Olympics it means a lot to me because it was all my future and I was only focused on the Finn and training every day to get an Olympic pass, even for Paris 2024, so that’s a great loss and I am really disappointed about it.”

Cameron Tweedle, from Britain, was so disappointed with the decision last November that he sold his Finn and started sailing a Laser.

“I sold my boat at the end of the season last year because of the decision from World Sailing to get rid of the Finn. It was really difficult thing for me but I wanted to carry on and lost 20 kg and jumped into a Laser, but I am back now in Finn doing as many events as I can. And really it was just about enjoying the sailing and the Finn class, which is a great environment for that. I haven’t really felt that anywhere else I have sailed.”

Speaking about the horrors of his crash diet, he said, “There was a four or five month period over the winter where I lost all the weight, and it was really difficult. My whole day revolved around eating absolutely no food and going to the gym as much as possible. It really had a massive negative affect on me personally, my relationships with my friends and family and at the end of the day it wasn’t healthy, so it’s great now to be doing what I used to and enjoying it all again.”

He said it was an unnatural situation. “Through the season I started bouncing back to my normal natural weight and it came back much easier than it came off because it’s the size I am meant to be and I shouldn’t be forcing myself into a situation which my body doesn’t want to be in. It’s not healthy and it’s not sustainable.”

He says he has been really enjoying getting back into the Finn and racing in Anzio.

“Really tricky conditions today. I’ve been knocking around tenth place, which I am happy with, as I haven’t sailed the Finn for a while but it’s great fun to be racing in a fleet in such tricky conditions. With the wind coming up and down, and in a really strong fleet.”

On the future, “I am going to do as much Finn sailing as I can. I love the class and it’s great fun. You are constantly learning with such a strong class at the moment. Hopefully I am going out to Australia for the winter and doing lots of different sailing but if it all goes to plan I’ll do the Finn Gold Cup out there as my next target in the Finn.”

Cardona came to Anzio with a mission – to win. “I really want to win this trophy. I already won the U23 trophy at the Europeans in Athens and to make the double U23 champion this year would be super nice.”

Today, “We had good conditions. The wind was decreasing a bit, but it was still good with nice waves and some shifty conditions and tricky, but happy with my day. I managed good speed downwind and good speed upwind, so sailing consistently, which is important as I have a DSQ and I cannot make a bad result. I did 1,2 and 4. In the last race I was tenth at the top mark, so I was pretty happy to come back to fourth.”

On qualifying for Tokyo. “We were the sixth nation in Athens and only four qualified, so it was a pity not to qualify there and now I think it will be tough to qualify in Genoa. The conditions there are challenging, as they were this year for the World Cup, and it’s going to be tough but we will do our best. I think we have some chances. There are three Spanish that could qualify and I am happy for being in such a good fleet in Spain.”

The removal of the Finn from the Olympics was a body blow for the young Spanish sailor. “For me it’s the worst news that the Finn goes out of the Olympics, because I am young and I think I could have had a very good career in the Finns. I am already 100 kg so no chance to go to Laser even at 92 or 93 kg, so I think I lose all my chances to get a medal in the Olympics. I am quite angry about this decision and I hope World Sailing can make a rethink and let’s see if we can get the Finn back in the Olympics. It would be super for all these guys that we have here.”

Racing in Anzio continues Thursday with two more races scheduled. Five more races are scheduled to complete the championship, which concludes on Saturday. With five race winners from the six races completed so far, this championship looks to be going right down to the wire.