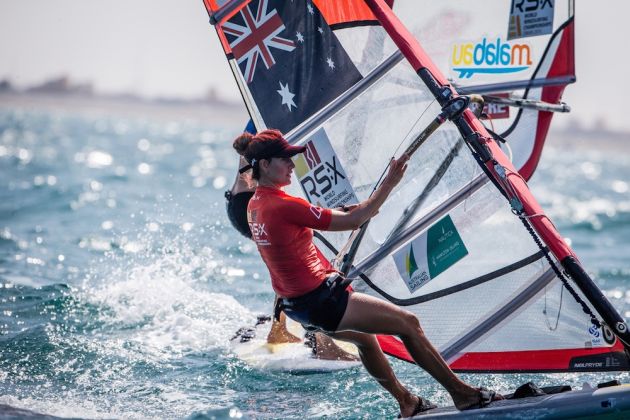 The RS:X World Windsurfing Championships wrapped up on Saturday, 24 October with Joanna Sterling finishing in overall 31st place and securing one of the six country qualification spots for Rio 2016 available at this regatta.

The 23-year old windsurfer did not make the top-30 Gold fleet racing, but had a series of strong days in silver fleet, which saw her finish the event as the leader of the fleet and with a strong fifth place in the last race of the regatta.

“Racing was very intense at these World Champs with so many girls trying to secure Olympic places and the light conditions were challenging. We have had two days of qualifying in light wind conditions, six to ten knots and unfortunately I missed out on racing in the top-30 gold fleet by one place,” Jo Sterling said.

“I was pretty disappointed about that after such a close fight and as it meant I couldn’t achieve the result I was aiming for at this event. But having said that, I had some good races in the final series and came away with the lead in the Silver fleet and qualifying Australia for Rio. Securing that country qualification spot was a major goal at this event and I'm very happy with this outcome,” she added.

“Qualifying Australia for a place at Rio has been one of my biggest goals this year. I knew that racing in Oman would most likely be in my weakest conditions (6-10 knots) and I've put a lot of effort into this throughout the last two years. Despite not coming away with the overall result that I would have liked, I can see big improvements in my sailing and am confident that with time, I will achieve more consistent places and move up the leaderboard.”

I will have a short break after this before competing at the Sailing World Cup in Melbourne in December before we have the next RSX Worlds in Israel in February.”

Joanna Sterling, who will race at the Sailing World Cup in Melbourne in December next, is coached by former national representative for Poland Max Wojcik, who was happy with the overall performance of his athlete:

“Silver fleet is not what we aimed for. But this was a light wind event and I saw Jo having great starts for the first time in light winds. Her speed definitely improved, she never sailed so fast in 6-10 knots. She has been working on light winds for a year and a half now and I can see a big improvement in this wind range. All in all, the biggest change I’ve seen was the mental one. Seeing the progress, I can say it’s been her best event until now in such light winds and it’s a great achievement to qualify the country for the Rio 2016 Olympic Games.”

With 13 countries already qualified in the women’s RS:X class at the 2014 ISAF World Sailing Championships in Santander last September, six spots were available at these World Champs. Three were secured by Hong Kong, Japan and Norway in the Gold Fleet and the other three by Australia, Denmark and Greece in the Silver fleet.

There are ten Olympic boat classes and with this result Australia has now secured eight out of the nine boat classes it is aiming to qualify for the Rio 2016 Olympic Games. So far Australia has secured a spot at the Rio 2016 Olympic Games in the Men’s and Women’s 470, Laser, 49er, 49er FX, Nacra 17 and Finn classes. The upcoming Laser Radial World Championships will be another opportunity to secure the Women’s Laser Radial spot. If required, the final Olympic qualifying opportunity for the Laser Radial will be at the ISAF Sailing World Cup in Melbourne in December (7-13 December).

More info about the event: http://www.rsxclass.com/worlds2015/