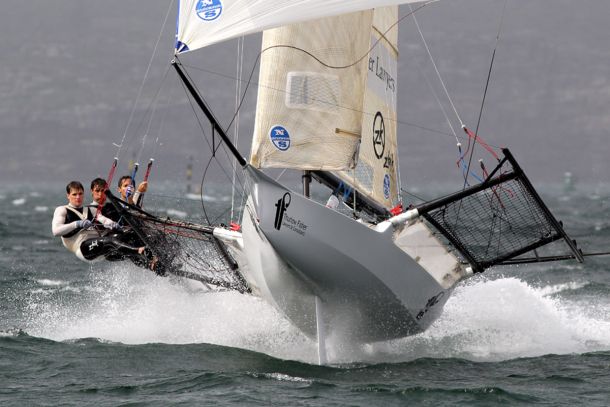 Following victories in the 2006 (Casio Seapathfinder) and 2007 (Fiat) JJ Giltinan 18ft Skiff Championship regattas, Michael Coxon has had to be content with a number of podium finishes behind Seve Jarvin and his successful Gotta Love It 7 team. A stunning win in last week’s NSW Championship, however, has given Coxon and his Thurlow Fisher Lawyers team of Trent Barnabas and Dave O’Connor a tremendous boost of confidence that they have the goods to win this week’s 2015 JJ Giltinan Championship on Sydney Harbour.

The 5-race NSW Championship produced five different winners and proved to be one of the closest contests in the sport’s 120-plus year history. Only three points separated the leading five teams as the fleet lined up for the last race on Sunday (1 February), and Thurlow Fisher Lawyers’ victory only came in the final 50 metres when Coxon’s team defeated Lee Knapton’s Mojo Wine by just 5secs.

Both teams went into the final race level on series points and Mojo Wine looked to have the title all but won when she held a 2½ mins lead midway through the race. Coxon and his crew never gave up and when David Witt’s Smeg took the lead (and ultimately won the race) from Mojo Wine it seemed to give the Thurlow Fisher Lawyers boys more confidence that they could also challenge Mojo Wine. Both teams fought hard over the final windward leg before Thurlow Fisher Lawyers finally got the upper hand just before the finish line.

Michael Coxon said the team was extremely happy with the win and was a great confidence boost as a lead up to the JJ Giltinan Championship. “We were happy to go into the final race of the NSW Championship with an opportunity to win if we were good enough, but knew that we were going to have to be at our best against such quality opposition”, he said. “After being squeezed out at the start we had to come from a long way back in the fleet and things weren’t looking too good until we managed to get up into third place at the bottom mark of the first spinnaker run. The team never gave up and we were determined to do our best even though it looked as if Mojo Wine was going to take the title after it took a big lead midway through the race”.

“As the race progressed, we started to get a little closer to Mojo and that’s when we began to think we might have a real chance after all. The final beat to the finish became a bit of a match race as we went tack for tack with Mojo.  It seemed that we edged closer and closer with every tack and it was a great feeling when we finally got there with less than 50 metres to spare”.

Further boosting the confidence of the Thurlow Fisher Lawyers crew was the return of forárd hand Trent Barnabas after being absent for most of the first half of the season. Trent took the time to be with his sons Zac and Jake who are featuring prominently in the smaller boats. Jack finished second in the Manly Junior nationals whilt the two boys teamed togfether to finish second in the Flying 11 nationals.

Coxon’s hard charging style has produced some great action shots of speed and disaster and, regardless of the result, you can be sure ‘Cocko’ and his team will leave nothing in the tank during the JJ Giltinan 18ft Skiff Championship on Sydney Harbour from 14-22 February.