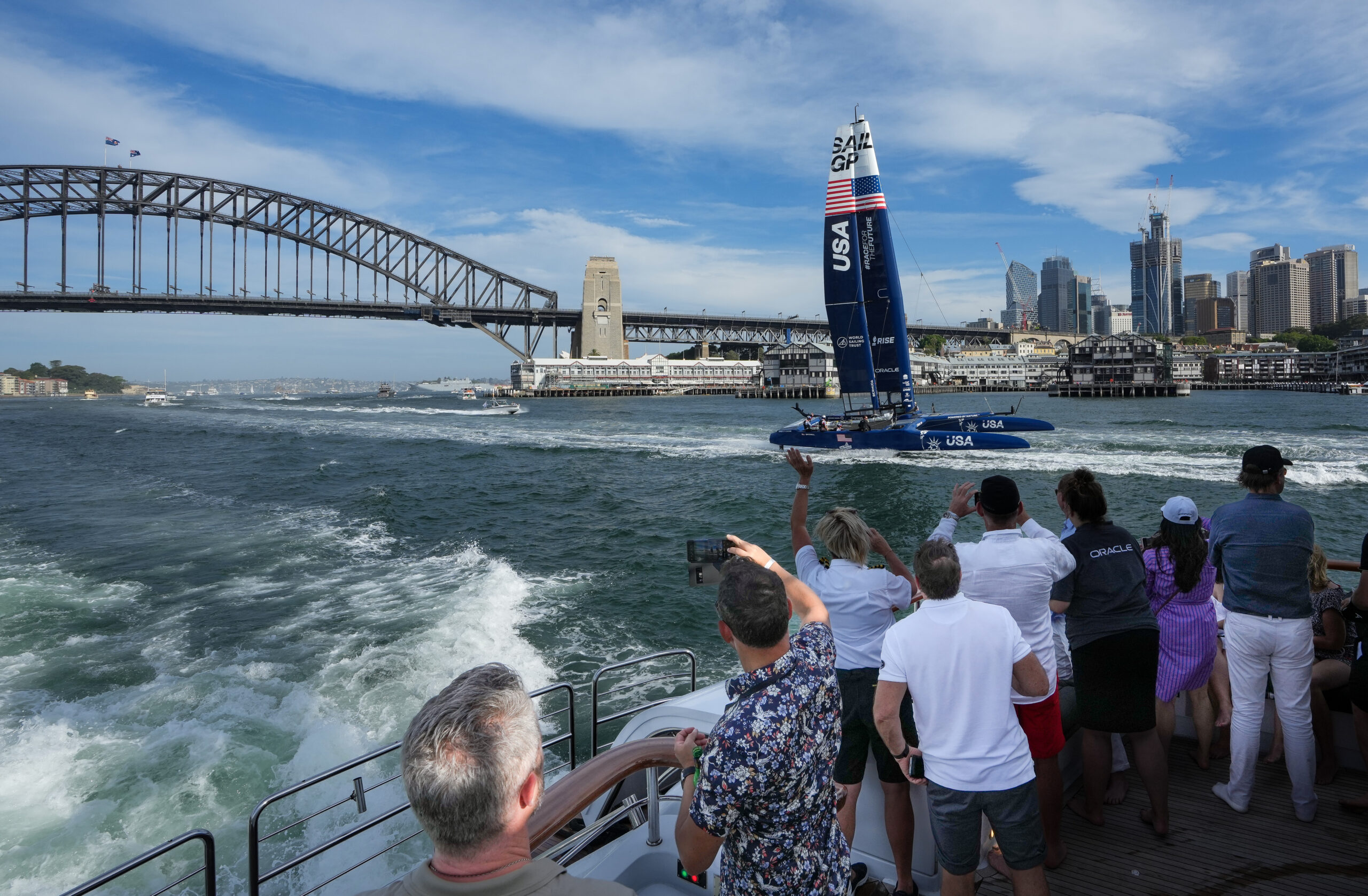 USA SailGP Team helmed by Jimmy Spithill make their way back to the Sydney Technical Area as spectators look on from a spectator boat on Race Day 2. Australia Sail Grand Prix. Pic - Adam Warner for SailGP

Jimmy Spithill: We hit a top speed of 53.1 knots (0.1 knots short of the speed record) in big breeze on Sydney Harbour, but that wasn’t even the highlight of the Australia Sail Grand Prix for us.

Since the first day I arrived at the helm of the United States SailGP Team, we’ve had one objective. Last weekend, at the Australia Sail Grand Prix, we achieved it. We’ve secured our place in the final winner-take-all race at our home Sail Grand Prix in San Francisco – and we’re in with a shot at the million bucks. We haven’t won anything yet, but we’re in the mix and now we’ll give it everything we’ve got.

To book our spot with an event to spare is impressive and a testament to this team. This season couldn’t have started any worse for us – taken out by the Japanese team and finishing last in Bermuda in our first event. Since then, we’ve had broken bones, damage to our boat and collisions with underwater objects. It’s just been one thing after another.

But the key thing is that we got to see this team in some critical moments, under pressure and facing huge challenges, and they’ve never stopped fighting. It can’t be overstated just how high the level is in SailGP. Things can go wrong real quick and you really see the pressure taking its toll, even on the best sailors on the planet. If you haven’t seen the crash between the Brits and the Japan SailGP Team in Sydney, check it out.

Luckily everyone came out safely, but it’s pretty gnarly and shows just how hectic things can be on the start line when every boat is pushing for an advantage. However, push too far, and it can ruin your season, ultimately becoming a million-dollar mistake.

We’re at the business end of the season now, and every point counts. That’s why I’m so stoked that we achieved our objective, while a lot of other teams didn’t. And to do it in front of friends and family was a proud moment too. Sydney is a unique venue because it has an island in the middle of the racecourse, so it’s great for fans and creates a lot of passing opportunities. Forget about courtside seats – in Sydney Harbour, you’re sitting on court in the centre circle!

Now we prepare for the United States Sail Grand Prix in San Francisco. The pressure is on the Aussies, who have dominated this season, winning four out of the last five regattas, and at this point, it’s their championship to lose.

We’re in a great position, and we have everything to gain – imagine winning all those events and then dropping the ball on the big one when it matters. What an awesome opportunity we have at home.

They’re a very polished team, they’re the reigning champions, and they dominate in big breeze, but the great thing about sport is that the favourites don’t always win. We are the underdogs, we have momentum, and we are getting closer.

We are already digging into the data to analyse and learn where we can improve and get closer to them – and I know San Francisco pretty well. Yes, it can be windy, which plays to the Aussie’s strengths, but you also get many lighter days. To win there, you really need to have the full package. There’s no hiding.

The cool thing about SailGP is, it’s not just a two-boat race. That’s pretty unique in sport, and it’s exciting to watch.

At the United States Sail Grand Prix, we will have three boats racing for the money – and any one of them can win. It’s going to be fascinating to see who takes the third spot. Will it be Japan, Spain, or a real twist and someone else?

SailGP is a bit like F1 in that you really don’t know what’s going to happen until you get right to the line. I watched Max Verstappen win last weekend, and man, what an insane race. Big congrats to him and the whole team at Red Bull Racing – it was a well-deserved victory, but not over until the final lap, and I expect the same in San Francisco.

If you enjoyed that F1 finale, you will love SailGP – super-fast boats, the best sailors on the planet, plenty of drama – and it’s all decided in that one, winner-takes-all race.

At the United States Sail Grand Prix, we will have three boats racing for the money – and any one of them can win. It’s going to be fascinating to see who takes the third spot. Will it be Japan, Spain, or a real twist and someone else?