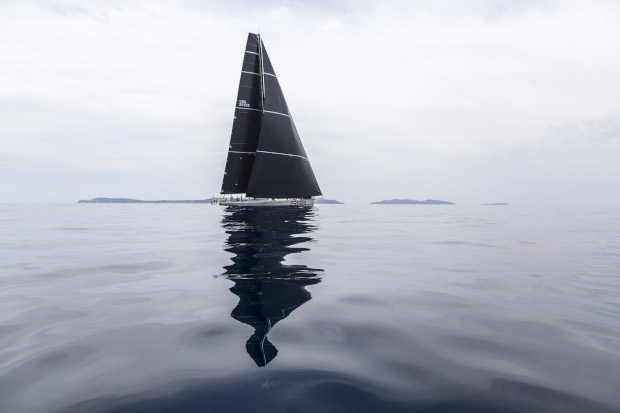 With the Rolex Giraglia’s much anticipated offshore race due to set off tomorrow, the race committee today sent the maxis in the IRC 0 Racer and Cruiser classes on a coastal course that was effectively a dry run of the offshore’s first leg.

After a delay for the wind to build, the final race of the inshore series started in the Baie de Pampelonne in a light south-easterly. The maxis were sent west to La Formigue, an isolated rock two miles east of Cap Bénat before performing an about-turn to the finish at the entrance to the Baie de Pampelonne – a course of 30 miles.

For the Racers start, the five boats ranging from George David’s Rambler 88 down to the Reichel-Pugh 60 Wild Joe, were bunched up at the committee boat end.

In the light conditions, and despite being lowest rated of the three 70 footers, Dario Ferrari’s Cannonball seemed quick and exited the Baie de Pampelonne ahead of her direct rivals – Alex Schaerer’s Caol Ila R and Sir Peter Ogden’s Jethou – a position she held much of the way to Formigue.

About two miles short of the turning mark the wind shut off for Rambler 88, but unlike yesterday, this was a prelude to a marginally stronger south-westerly filling in.

As Rambler 88 stopped (a rare occurrence on the giant American speedster) a compression occurred with Hungarian Marton Jozsa's DSS-equipped Wild Joe catching up the 70 footers. To stay in the breeze, Cannonball and Caol Ila R gybed offshore, while Jethou stuck to her course and she slipped through to leeward, first to the new breeze.

On the broad reach to the finish, Jethou extended away ultimately winning by 9:38 under IRC corrected time from Cannonball. Having won both inshore, the British maxi, now 77ft long after a stern extension last winter, comfortably claimed the IRC 0 Racer inshore prize.

While celebrating with his crew at the former Café du Paris bar in Saint-Tropez, a delighted Sir Peter Ogden commented. “It was a good race. We had a reasonably poor start and were last at the top mark, but we managed to claw our way back and we were all together at the turning mark.

“On the way back, our waterline length definitely worked for us and we just sailed away. It was as perfect as you could possibly have it. I am very pleased with where we are on the project – we’ve only done four races and there is a lot more to learn about how to sail it quicker.”

Tactician Paul Campbell-James said that aside from a rotten start it had all gone well: “After the top mark we put our Code 0 up and went into the first bay, which got us bow-to-bow with the other 70s. Then they had more breeze, but lost it before we did and we were closer to the mark when the right shift came through.”

On the run home it was a case of the rich getting richer.

Cannonball, the lowest rated of the 70 footers came home second, to take second overall with Rambler 88 third today and third overall among the maxi Racers.

While Jethou dominated the Racers, the opposite was true in the Cruisers where Benoît de Froidmont’s Wally 60 Wallyño was displaced from first place by Frenchman Jean-Pierre Barjon’s Swan 601 Lorina 1895, winner of today’s race. The two boats finished tied, Lorina 1895 claiming the prize by winning the last race.

“We have tried to win this for four years, so it is a great day,” said a beaming Barjon. “Tonight it will be a special celebration and tomorrow we will try to do the same in the offshore race. But there are very good competitors and it will be very difficult for us.”

Lorina 1895 seemed to come into her own today and after a very good start and first leg Barjon reckoned his boat was seven minutes ahead at the turning mark. “But after that Wallyño came back into us and at the finish we were only two minutes ahead – after four hours’ hard work!”

Benoît de Froidmont was gracious in defeat: “Jean-Pierre did a very good job. Lorina 1895 sailed very well today and they deserved to win.” In his capacity as President of the International Maxi Association, he added: “Everyone was expecting more races, but we have been able to race and the maxi fleet was very competitive.”

Argentinean Miguel Galuccio’s Vera (ex-My Song) once again led the IRC 0 Cruisers around the race track correcting out to third under IRC and overall.

“Yesterday we were very frustrated because we were a long way ahead of everyone and were definitely winning [when the race was abandoned]. Today we made a good start and we had a good race apart from a moment of light wind,” said Galuccio, who is eager for tomorrow’s offshore race, coming here fresh from winning the maxi class in the 151 Miglia-Trofeo Cetilar.

Tomorrow at 1200 the maxis will line up in the Golfe du Saint-Tropez for the Rolex Giraglia offshore race. For this the maxi fleet will be joined by several heavyweights such as Sir Lindsay Owen-Jones’s Wallycento Magic Carpet 3, Pendragon VI and Anywave plus the magnificent Andre Hoek-designed modern classic, Marie, at 54.64m long, one of the race’s biggest ever entrants.

In the meantime tonight there is the Rolex crew party and prizegiving on the plage de la Pesquière.

For more information and results: https://www.rolexgiraglia.com