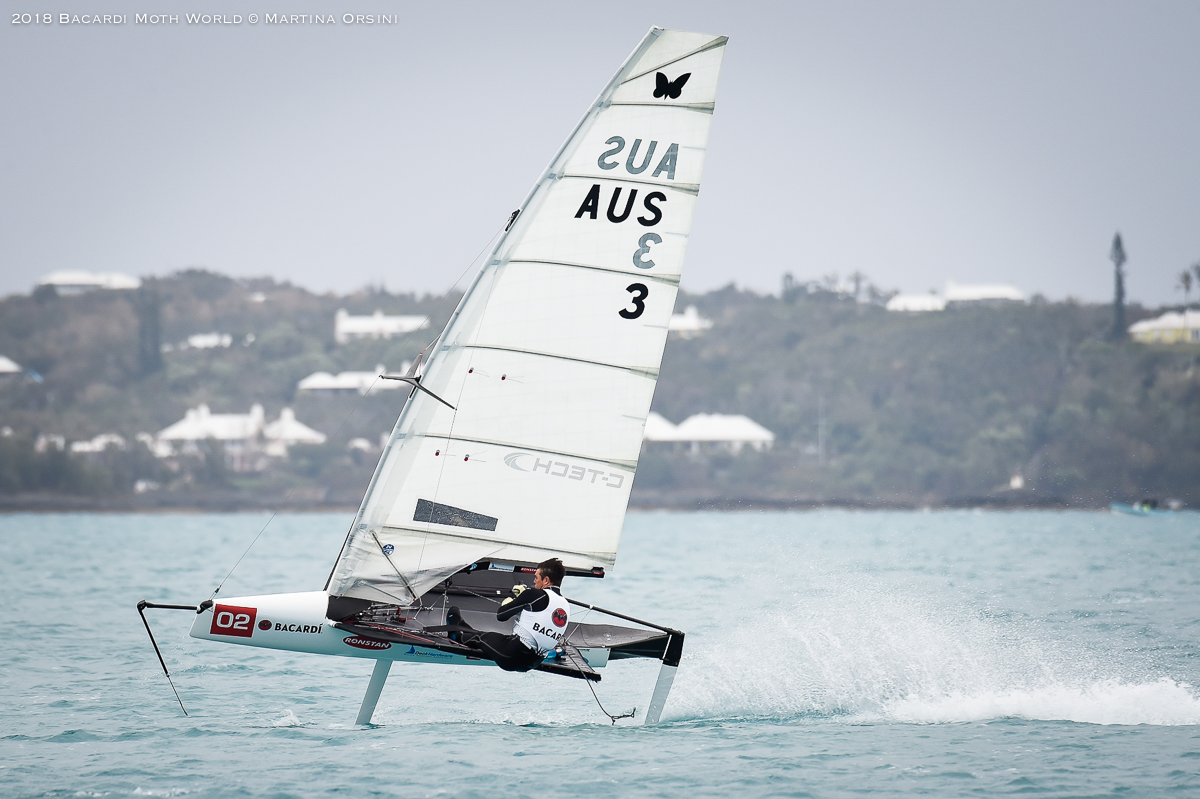 Iain Jensen's hair is blown back as he works upwind during Day 3 of the Bacardi Moth World Championship (©Martina Orsini photo).

HAMILTON, Bermuda (Mar. 28, 2018) — Paul Goodison of the U.K., Francesco Bruni of Italy and Rome Kirby of the U.S. hold first, second and third, respectively, at the Bacardi Moth World Championship in Bermuda.

Today’s conditions were far more manageable than yesterday’s blow out. But even though the northwesterly blew at a more manageable strength of 12-to-18 knots many competitors still suffered breakdowns that had them scrambling.

Goodison’s forestay broke during tune-up which forced him to miss the first race of the day. Kirby discovered a crack in his main vertical foil just before docking out. And Iain Jensen of Australia was forced to retire from Race 6, the fourth of the day, when his mainsheet broke.

“The mainsheet broke just below the splice,” said Jensen, who finished 1-2-1 in the first three races of the day. “The worst part is that I now have two discards in my scoreline, both due to rigging failures.” Jensen holds 10th overall with 54 points.

“The forestay broke at the terminal halfway up the first tuning leg,” said Goodison. “It caused quite a bit of damage with the rig falling down and the boom getting tangled up in the fairings. Luckily, Brett and Giulia helped tow me back to shore and the Maguire Boats shore team helped get the rig out and a rope forestay in place.”

Goodison made it to the racecourse for the day’s second race, which he won, but his rigging problems persisted.

“The rope forestay kept stretching so in between Race 4 and 5 I had to go capsize the boat to try and tighten it and I missed the start of Race 5,” said Goodison.

Goodison estimates he started Race 5 30 to 40 seconds late and even though he wasn’t at 100 percent performance he kept gaining on Jensen throughout the race. The two blazed down the run to the finish line, with Goodison making big gains by sailing lower and faster. Jensen won the race, but only by one boatlength in the closest finish of the regatta to date.

“It was quite an entertaining day,” said Goodison.

Bruni catapulted into second overall by posting four third-place finishes. The veteran sailor pumped his fist after each race and was clearly ecstatic with his performance, even shouting “Yeah, baby!” after one race.

“I’m very, very happy. I could not expect more,” said Bruni. “Remember, I’m almost 45 years old so to be so consistent is not easy. I gave everything I had. I have to thank my son, Bobby, and my coach, Carlo de Paoli, for helping prepare me.”

Bruni pulled off the hero move of the regatta in Race 4, the second of the day, when he executed a port-tack start at the pin end. That is one of the riskiest starts in any race, but in the Moth class the degree of difficulty is 10 because the Moth is not easily tacked. Bruni did it not once, not twice but three times.

“I saw the right corner of the racecourse looked really good and the best way to get there was the port-tack start,” Bruni said. “Sail to the right corner and tack once to the windward mark. I have to minimize my tacks because, remember, I’m 45. It worked really well. I’m very, very happy with how I managed the day.”

Kirby was lucky to discover the crack in the vertical foil that is central to the Moth’s foiling ability. “If I hadn’t found the crack the foil probably would’ve broken during racing,” Kirby said.

While many in the fleet have new boats, new sails or new equipment, Kirby is sailing the same boat he’s had for the past three years. Before the regatta he took part in two week-long training sessions in Florida with Goodison, Funk and Victor Diaz de Leon. He credited that session and his knowledge of the area for helping with his performance.

“I’m just trying to be consistent, get off the start line in good shape and stay in the top 10 at the windward mark,” Kirby said. “The racecourse today was shifty and puffy at the top, it was tough. There is some geographical stuff that I’m aware of and that probably helped me pick off a few boats. But it’s tough. My legs are shaking from all the hiking. I can barely walk.”

Racing is scheduled to continue tomorrow with the wind strength forecast between 5 and 10 knots.