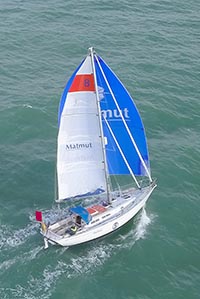 The 73-year old skipper is expected to sail in to Storm Bay and cross the line shortly after Dawn at 6am local time Saturday.

All skippers are compelled to pick up a buoy and stop in Storm Bay for a minimum of 90 minutes to hand across film and letters, be interviewed by the media and meet family and team members. No one can board the yachts or provide any assistance and the skipper cannot disembark.

Each skipper will be interviewed live by Race Chairman, Don McIntyre, and answer questions from media gathered at GGR Race HQ in Les Sables d’Olonne. These interviews will be broadcast live on Facebook www.facebook.com/goldengloberace and coverage of Jean-Luc's arrival is planned to start 30 minutes before as he sails or motors into Storm Bay.

What is happening with the two Golden Globe Race yachts abandoned following the rescue of Gregor McGuckin and Abhilash Tomy?

Irishman Gregor McGuckin made no mention about abandoning his yacht Hanley Energy Endurance at the press conference held in Perth on Monday and has been unavailable for comment since.

On 26th September Neil O’Hagen, spokesman for Team Ireland issued the following statement which the GGR republished in that day's press update: “During the controlled evacuation of Hanley Energy Endurance, McGuckin was instructed to leave the vessel afloat.

“The French fisheries patrol vessel Osiris instructed McGuckin that scuttling the vessel would be in breach of international maritime regulations. Hence, McGuckin removed all debris from the deck that could become separated, secured all equipment on board, and ensured the AIS beacon was active.

“Power source to the AIS device is solar panels which should remain active without any outside assistance, reducing the risk to other vessels. Precautionary steps were also taken to ensure the relatively small amount of fuel onboard is secure.”

On the same day, Captain Dilip Donde, manager for Abhilash Tomy's campaign, reported plans to salvage Tomy’s yacht Thuriya, left drifting in the Indian Ocean when he was recovered by the crew of the French Fisheries Patrol ship Osiris.

“The plan is for the Indian Navy to tow Thuriya to St Paul’s Island some 40 miles north, and leave a crew to make repairs and sail her to land.”

The Indian Navy has been unavailable to comment further.

GGR Race organisers believe the reason French Fisheries Protection vessel Osiris is not allowing these skippers to scuttle their boats is because the waters surrounding this string of islands in the South Indian Ocean are designated an International Marine Park, and protected by law from being polluted deliberately.

Responsibility for what happens to these yachts rests with the skippers, and not the Race organisers.

Commander Abhilash Tomy is expected to return to India tomorrow and will hopefully provide an update on his yacht, Rustler 36 DHL Starlight.