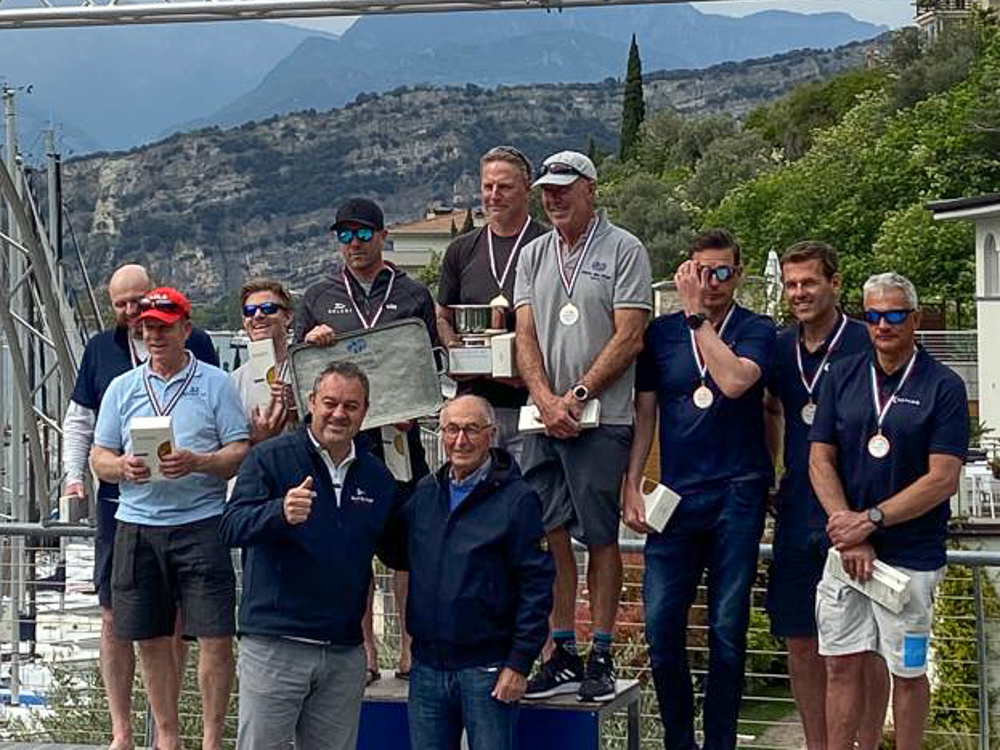 After two days of classic Garda breezes, the final day brought a change with very different conditions, cloudy skies and a light shifty gradient wind from the south.

In Race 7, New Moon was the leader from the left on the first beat. There was a good battle with Caracole (Bernard Haissly, Nicolas Berthoud, Daniel Stampfli, SUI) on the second lap followed by a good recovery from Jean Genie which got through a busy mid pack to take third.

The end result would come down to the final race. It was another tricky and variable race. Helly Hansen backed her strategy and made good gains to the right side of the course. John B (Gavin McKinney, Lars Horn Johannessen, Mathias Dalhman, BAH) made a strong second lap to take a number of boats, also working the right of the second upwind to finish in second place, with third place going to Caracole.

A fourth place for Jean Genie, with Australian sailor and coach Andrew Palfrey aboard, was enough to take the Alpen Cup from Helly Hansen by just two points, with Aspire some way adrift in third.

Howells was relieved to get the job done and commented “Some very difficult tricky races today with 8-12 knots and nip and tuck all the way round the course with lots of place changing on every leg.”

With Jean Genie winning, it also marks the third time in a row that the Alpen Cup has been won by a British boat, having been won by Peter Morton in 2019 and in 2021. It leads to the prospect of a potential unprecedented three British boats taking part in this summer’s world championship in Hankø, Norway.

The International 5.5 Metre Category A series continues next month with the German Open/Robbe and Berking Sterling Cup at Glücksburg on Flensburg Fjord from 16-19 June. This is preceded by the Bronia Preis at the same venue the previous weekend from 4-6 June, providing a great opportunity for a two great events.