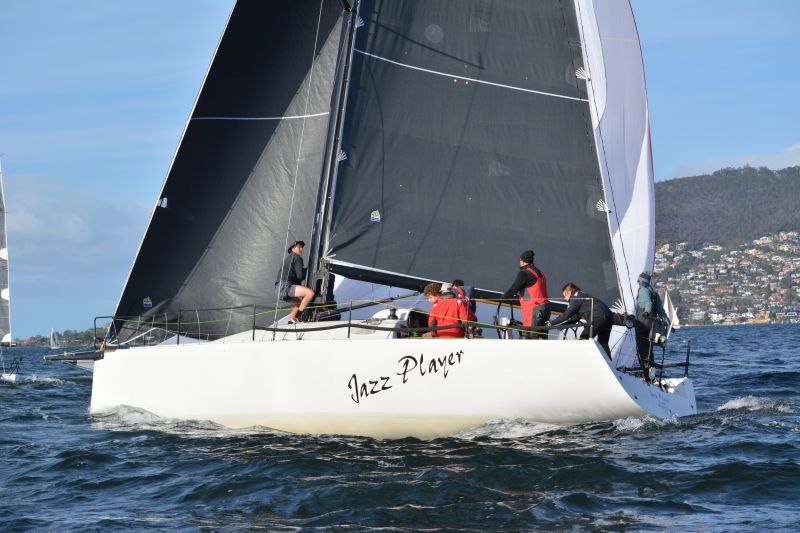 Kettering Yacht Club secretary John Dryden and his young crew of Jazz Player notched up a hard-fought and close Division 1 victory in the Combined Clubs Winter Series on the River Derwent today.

Derwent Sailing Squadron set a challenging course for the 55-boat fleet, starting with a short beat up-river to the first windward mark for three of the four divisions that saw many close port-and- starboard encounters.

Fortunately, good steering and sail handling avoided any collisions but later in the race Division 1 boat Kraken 42S clashed rigs with a smaller boat from another division.

Apart from owner/skipper Dryden, who is also a member of the DSS, the crew of Jazz Player are mostly young former Laser sailors from Kingston Beach Sailing Club. Today’s win following a second place last Sunday.

“We had close racing with the two Melges 32s, Crusader and Cockwomble, after an early encounter with Oskana at the weather mark…but on corrected time we won,” John Dryden said after the race.

Cockwomble was having its first race for new owner Andrew Smith, a former SB20 skipper, placing a close fourth on handicap. The name is a derogatory term means ‘obnoxious or foolish person’ and has a photo of US President Trump on its topsides)

Next Sunday’s Combined Club Winter Series Race will be run by The Royal Yacht Club of Tasmania.