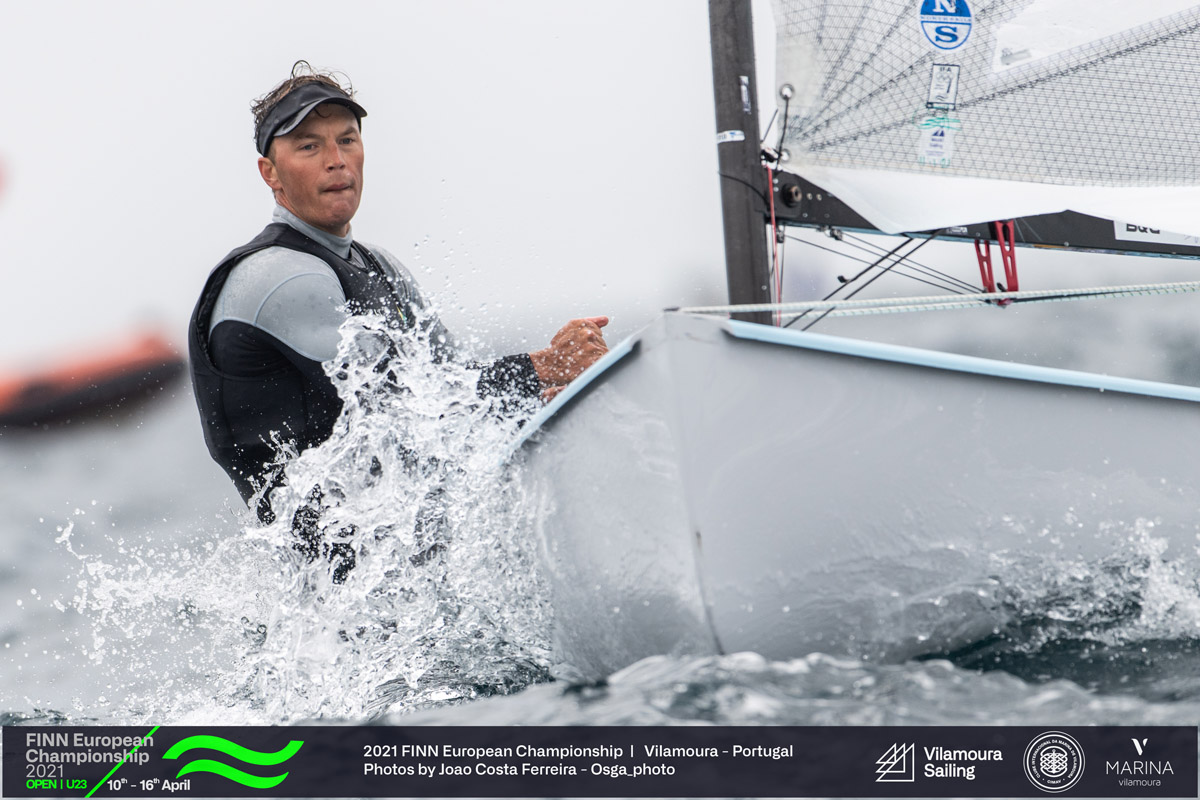 The 2021 Finn European Championships saw 49 sailors from 29 nations battling it out on the waters of Vilamoura on the south coast of Portugal. Many sailors, including Lilley, used the regatta as a warmup event to the crucial 2021 Finn Gold Cup, the World Championships of the Olympic Finn Class, in Porto, Portugal in three weeks’ time.

It was Lilley’s first international regatta in the class for 15 months and the first time much of the fleet has met since the 2019 Finn Gold Cup in Melbourne, at a time when pandemic was just another word in the dictionary.

“A real welcome back to international competition and world class standard,” Lilley said. “Exactly what we came here for.

“I think some of the rust showed in the front half of the regatta but I managed to take those lessons and polish off a bit towards the back half of the event.”

The excitement at being back racing in an international fleet showed when Lilley started the competition with a bang to finish second in the first race. But with consistency eluding almost everyone in the fleet, a couple of high scores followed before he managed to move up the ranks again on the penultimate day of racing.

“I managed to click in the first race of the series and then battled through the next four really,” Lilley commented on his race series.

“It was back to mega long courses, a really big fleet and Vilamoura offered some large shifts and pressure differentials combining for a perfect combination of getting a bit deeper in the fleet. But the back five races I managed to grease the groove again and get back into the swing of consistent racing.”

Lilley had his best day in the slightly stronger winds and bigger waves on Thursday.

Those conditions saw him post a sixth and a third place to move into 10th overall ahead of the final two races. With lighter winds on the final day, Lilley wrapped up the regatta with a 12th and a 19th place on Friday, which was enough to climb up another two spots on the results ladder and into eighth overall.

“I think this week has presented beautiful and challenging racing conditions and it’s just been a privilege to race in a truly world class fleet with the very best sailors in the world. I think the hiatus from international competition left me a little rusty in some areas, but that’s why we are here and making big steps forward every day,” Lilley said.

“It’s been really nice to re-connect after an extended period away. It was great action when we were all together for the Gold Cup in Melbourne and it’s been great to be here.”
Lilley secured Australia the Olympic quota spot in the class at the Finn Gold Cup 2019 in Melbourne, and after finishing fifth in a high-calibre fleet on home waters in December 2019. He is yet to lock in his Tokyo selection after the 2020 season was cut short and the Games postponed due to the COVID-19 pandemic.

International competition experience is an essential part of the preparation for the Tokyo Games and with the challenges of the pandemic ongoing, Lilley is grateful to have the opportunity to race at both the Open European Championships and the upcoming 2021 Finn Gold Cup.

He has been travelling to Europe under the strictest travel protocols, developed in conjunction with the Australian Institute of Sport and Australian Government. With just over three months to go to Tokyo, he is aiming to make the most of his time with the international fleet.

“We are focussing on making the days count and not counting the days. One step at a time and we still have the world championships to prepare for and compete at. We are moving in the right direction for Tokyo, no doubt, but need to bring it all together,” Lilley said on his ultimate goal to represent Australia and race successfully at the Games.

“In the current climate with the ongoing pandemic, I really appreciate to be able to be here at this time. I’m also very thankful for all the training support I received back home over the last year, but Australia is not offering the same kind of fleet racing practice and the opportunity to get international competition experience so close to the Games. It’s an essential part of our preparations and we are thankful for the opportunity to be here,” Lilley added.

With only a few of the top sailors missing, the fleet in Vilamoura contained 13 out of the 17 sailors so far selected for Tokyo, as well as sailors from 15 countries who will be competing for the final European place at the Finn Gold Cup in three weeks’ time.

Most of the fleet as well as Lilley will continue training in Portugal before the Gold Cup, the World Championships of the Finn Class, in Porto, a few hours north of Vilamoura, which is also the final European and African continental qualifier.

“We will head up to Porto in a few days and get back to work. Refine a few things, analyse what worked well at the Euros and go about implementing some improvements for the worlds and valuable lessons for the Tokyo Games,” Lilley explained.

With the Finn Class moving on to Porto, Vilamoura will next host the 2021 Open European 470 Championships (30 April – 7 May 2021), which will also include Australian Sailing Team entries Mat Belcher and Will Ryan as well as Monique de Vries and Nia Jerwood.