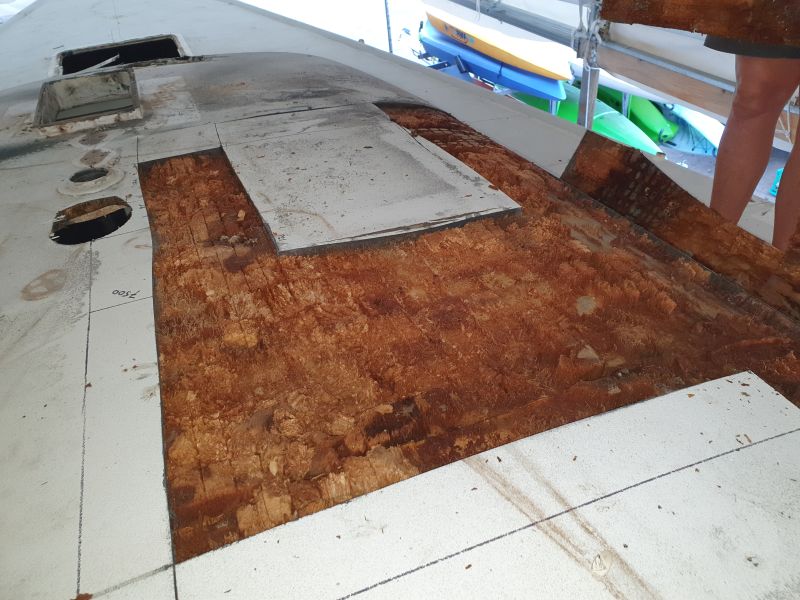 In parts 1 – 5 we have explored the purchase, haul out and delivery from Sydney to Brisbane of the World’s First TP52, a vessel we rescued from becoming scrap. When we last left the boat, it had settled into her new home in Brisbane and we had stripped the interior of everything.

The reason J-Bird III was so attractive to us is that we wanted a fast hull, but wanted head room as I am 6’4. There just simply isn’t a fast race boat from old days or more recently that is within our budget and has headroom for me. As we want to eventually do a bit of cruising through the Pacific on this vessel, it has to fit me.

So finding a boat that the deck needs replacing was perfect for us. The boat is full carbon and had a balsa core deck. When balsa gets wet it rots and disintegrates and there were some areas on the deck that it was simply not safe to walk on as you felt like you were going to fall through. In fact I used to say to people ‘it has more spring than my nephew's trampoline’.

So our plan was to cut the front half of the deck off and replace it with a new profile and then the cockpit and rear side decks would need to be re-cored as we would keep it pretty much the same. We were however going to move the companionway back to open up the saloon. We could do this as the engine was also being removed and it sat under the current companionway.

Once the decks were clear, it was time to start cutting open the deck. Cutting or grinding carbon is a horrible job. The stuff is three times as itchy as fiberglass and we would learn very quickly that you need to not only cover up, but add additional layers if we were to avoid the dreaded carbon itch.

The first panel to come off was the coach house on the starboard side. This was one area you didn’t want to walk. Initially I just cut off the outside carbon and peeled it away and what it revealed was stunning. Not only was the core rotten, it was still wet. This boat was actually holding water really well. Panel after panel, we cut away the deck and it kept revealing more and more rot and water.

At the gunnels the plan was to cut the panels away as close as possible without touching the sides. We would then be a little more careful so as not to penetrate the hull which we believe is still dry as there doesn’t seem to be any new fittings since it came out of the factory. Slowly but surely the deck was removed, first with the coach house, then the foredeck was removed and eventually we removed the side decks. We also removed the ring frame which was just forward of the masthead bulkhead. We were doing this as the new deck will be a lot higher and we wanted easier access to what will become a master cabin. So instead of extending the bulk head up to meet the new deck, we will just build a new ring frame here.

On the gunnels we took the top deck off, chipped away the balsa and then cut the bottom layer of carbon back so it just left a strip of carbon along the top of the hull. There is no need to remove this as we are raising the deck anyway. Around the shrouds and stanchion bases we literally cut around them and will find a way to match the new deck into these areas at a later stage.

Whilst doing this we were constantly thinking of what the new deck would look like and how we would build it. Would we use a plug and build over the top of it, would we use strip planking, or foam and how would we make the hull look right whilst also achieving our desired head height inside?

The design of the new deck meant countless hours of looking at what is out there on the market today. Ultimately we settled on a desire for a cross between the new Invisible Hand which is a Pacific 52 (a design that is trying to get back to the original concept of the TP52 which was an offshore boat) and the Club Swan 50. What we liked about Invisible Hand was the chamfer on the deck. If we used this we could raise the deck height from the bow and this would help in keeping the profile of the coach house lower. The profile of the Club Swan was really appealing to us so our minds would be working on a concept for how to make that work.

The boat was originally designed by Alan Andrews Yacht Design so we contacted him to see if he was interested in working with us on the new design. We were so grateful when we received his positive response and a desire to see J-Bird III sailing again. The story of the design and the story of Zero Emissions will be in our next blog so stay tuned.

Our blog is a long way behind the project purely because finding time to write it between our waterway cleaning programs and the build is really hard. To follow more regular updates of our project visit www.Facebook.com/JBirdIII and to follow the efforts of our charity visit www.OceanCrusaders.org

Ocean Crusaders recently won the Queensland Sailing Sustainability Award for our campaign in last year's Sydney to Hobart where we conducted a clean up in the Harbour before the race and in the Derwent after the race whilst competing in the race and taking third in division aboard Ocean Crusaders Dodgeball, John Warlow’s Beneteau First 40.7.

Ocean Crusaders is a charity dedicated to cleaning our oceans. We go places others don’t want to, remove rubbish others don’t even know is there and we do it for one reason, for our marine life. J-Bird III was destined to be scrapped if we hadn’t bought her. Now she is being recycled and given a new life. Our motto for this boat will be ‘Zero Emissions, Zero Compromise’ as we turn her electric. That doesn’t mean we have to compromise on anything in the way of performance! We are seeking sponsors for a race program so if you are interested or know someone who is interested in supporting this campaign, please contact us through our website.

NB: Whilst this vessel will be used to promote Ocean Crusaders, the boat is paid for by Annika and I personally. NO funds raised through donations or fundraisers for the charity will go into this project. Sponsors for this project will receive benefits through Ocean Crusaders as we will always promote our charity and those generous supporters with this boat.

Clean Oceans Make Us ALL winners!