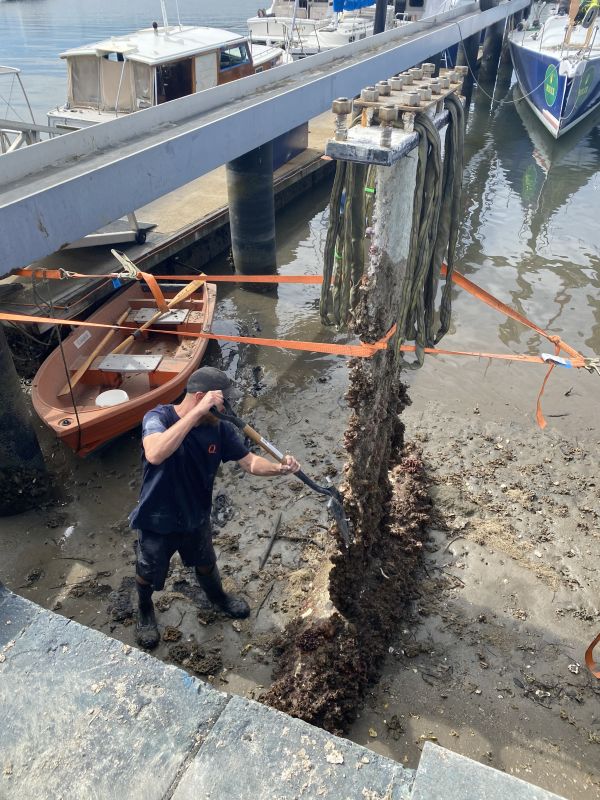 The keel at low tide - note "the reef" attached to it.

As featured in Part 1 of this blog series, we have purchased the World’s First TP52 originally known as J-Bird III. Due to the state of the boat, it is going through a full restoration and conversion to zero emissions. Since the first blog was released, we have been contacted by many people including former crew and the original owner’s son. It has been fantastic to see so many people interested in this project.

We bought the boat with it moored in Pittwater and this was soon to prove a huge hurdle. Initially we had planned to sail it carefully back up the coast to Brisbane. We would fit an outboard to the transom and sail under reduced sail area. However, that plan was quickly shelved when I jumped on it again for the first time after we had bought it. I turned the wheels to see how the rudder bearings were and when I got downstairs, I saw a steady stream of water pouring in. My immediate thought was to get it out of the water ASAP. Unfortunately, without a survey we were struggling to find insurance which is a mandatory item for hauling boats out at boat yards. It took a while to find, so in the meantime, we set up a solar panel and dedicated bilge in the rudder compartment to keep her floating.

Due to the state of the boat, and being commercial skippers, we decided she was in no state to travel offshore. So now that we weren’t sailing it, the only option was by road. In Brisbane it was coming out of the water and going to our own yard where Ocean Crusaders are based so everything we did in Sydney, was just going to happen in Brisbane, it’s just the delivery was a bit longer on the truck.

There are two places that have travel lifts in the local Pittwater area, The Quays at Church Point and the Royal Prince Alfred Sailing Club. My first call was to Stephen Hosking at the Quays as they had been in contact when we were looking for support for our Sydney to Hobart Clean Up campaign. The main issue they had was they couldn’t lift a boat with a 3.2m keel and get it into the hard stand area. So they suggested calling the RPAYC, which I did. I went and saw them as we were working in Sydney at the time, removing 24.8 tonne of debris from the Cooks and Georges River over an 18 day clean up program. It just happened that one of the truck companies was due in the yard later that morning.

So I went out to the boat and returned to the club after lunch and met up with Stuart from Boats by Road. The biggest issue we were facing was not the size of the boat, it was the length of the mast. At just short of 25m, getting this through the streets of Pittwater was going to be a nightmare. Stuart was extremely helpful through this entire program of getting the boat up to Brisbane. Even though we got quotes from other companies, I felt obliged to Stuart as we believe in customer service and Stuart was helping us with everything. It’s also why we returned to The Quays to hatch out a program. Customer service was paramount to making this project work. That and the fact that getting the yacht out of RPAYC was going to be a challenge in itself.

Whilst I wanted the boat out of the water ASAP, it wasn’t until after our cleaning program on the Georges River, that we were going to make this all happen. The bilge was working perfectly so there was no hurry. Through lots of phone calls, and plenty of frustration on my part, we eventually came up with insurance and a plan. The plans moved from taking the rig down with a barge crane and moving it to a nearby ramp, back and forwards for RPAYC and The Quays and everything in between. It really changed more often than someone would change their underwear. Even the dates changed a lot.

The final plan would see the boat head to the Quays where the mast would be removed and packed ready for freight by Mark Eaddie, the local rigger operating out of the Quays. They would use the crane on the top of the Quays travel lift for this program. Then the boat would be lifted. Knowing they couldn’t clear the 3.2m of the keel, they actually dropped the keel off on the sand right at the wall line. They secured it with divers and then undid the bolts and out she dropped, with a bit of persuasion I am sure.

Then, without a keel, they could lift it into the yard where the reef removal took place. Yes, this thing had a pretty good reef on it. On one of the days I had visited the boat on the mooring I went over with a tiny little scrapper and tried to clean the growth off. It didn’t budge, this needed shovels and some serious gear to clean this hull, it’s nothing a diver would’ve ever done. Once the hull was clean, they removed the rudder and then plugged up the holes created by the keel bolts and rudder. The plan was to put the boat back in the water with the mast on it and take it to Brooklyn Boat Ramp where we would haul it out with a crane and onto the truck.

This would save a lot of time for Stuart the truck driver as he could hit the road as soon as it was loaded. A boat this size you cannot drive through the streets of Sydney during the day, it has to be at night, but then you have to travel on the major highways only during the day. So being right next to the highway meant that he could leave as soon as it was loaded.

So once plugged up, they put the boat back in the water and loaded the mast onto the deck and tied it up to the work pontoon ready for us to come and collect it. It was floating very high in the water without the keel but surprisingly stable. The next project was to clean the keel. There are some pretty dirty jobs in the world but cleaning the keel at low tide at the bottom of a travel lift, well all credit to the guys at The Quays as they just got stuck in to make it happen. Once cleanish, they lifted the keel up to the hard stand and water blasted her and that is where I saw it when I arrived late that afternoon, having packed up our cleaning operations on the Georges River.

During the day there were up to 15 people on the boat at any one time, not because they were needed, just to ensure everything went safely. To be honest, I was reluctant at first when I was told that we couldn’t do the work ourselves. I’m the kind of person that will do as much as I can to save money as we aren’t flush with cash. But having been told that we aren’t allowed to do any work on the hardstand anyway, I reluctantly let the team at Q Service do the work overseen by Stephen. I even hated the fact I wasn’t going to be present for this. We had planned to have Annika there to watch the progress, but she was forced into isolation having been on a plane home from Sweden with a confirmed coronavirus case within two rows of her. She only found out the morning she was meant to fly down, the day before all the work was due to take place.

So when I turned up with all the work done, so professionally, and I wasn’t covered in reef, well it was an amazing feeling. Leaving it to the pros was a great decision and I am grateful to all the team who worked on the boat at The Quays that day. Whilst I am sure the boat will never see that marina again, I’d highly recommend anyone down that way to let the team at The Quays do any work you need for your boat.

The next plan was for us to pick the boat up in the morning and tow it to Brooklyn boat ramp…..but that will be part 3 next week.

Ocean Crusaders is a charity dedicated to cleaning our oceans. We go places others don’t want to, remove rubbish others don’t even know is there and we do it for one reason, for our marine life. Having seen first-hand the effects marine debris has on our wildlife, we all need to take responsibility and refuse single use plastic.