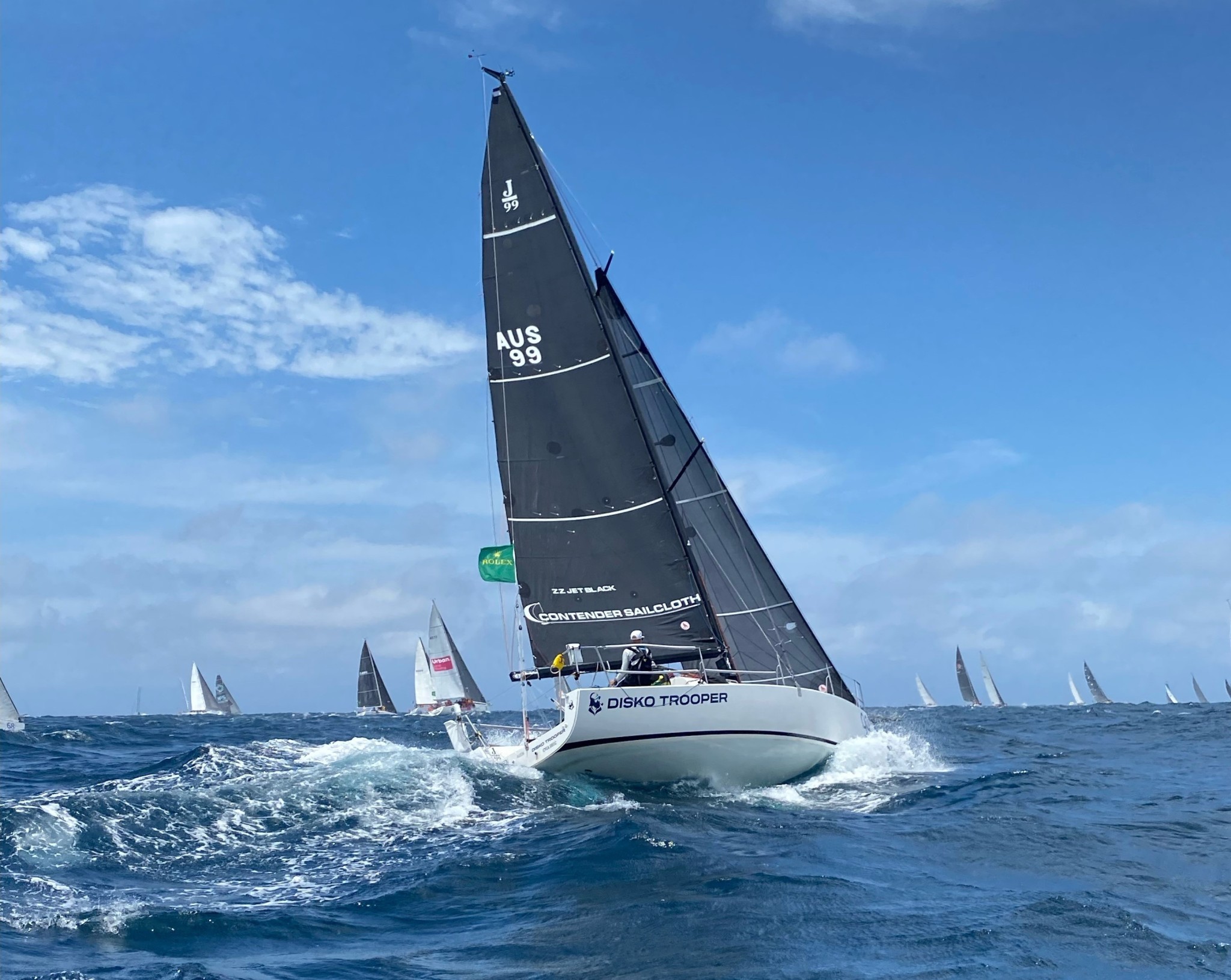 With eyes on the dispute for the overall victory between the two 52 footers in the Rolex Sydney Hobart, you may have missed the victory in the inaugural Two-Handed category by Jules Hall and Jan Scholten on J/99 Disko Trooper-Contender Sailcloth for all three handicap systems IRC, ORCi and PHS.

As J Composites prepared to celebrate the 100th J/99 at Boot Düsseldorf, the unwelcome news of the boat show cancellation was quickly erased by the J/99 Two-Handed victory – a victory which illustrates many points of satisfaction.

Beyond the exceptional sporting prowess, preparation and determination achieved by Jules and Jan during one of the most difficult editions of the Rolex Sydney Hobart, this victory perfectly exemplifies the performance envisaged by J Composites with the J/99.

The J/99 was designed by Alan Johnstone from J/Boats, engineered and built in France by J Composites. During its design, the motivation of the shipyard teams has always been to make a versatile sailboat, easy to handle and perform, but also to build a very stable and solid unit.

What better proof than to find the two J/99’s being the two smallest boats in the fleet to finish ahead of many fully crewed and much larger yachts on the water, and in a race with 43 per cent retirement (including 59 per cent in the Two-Handed division) due to the tough conditions on the first night.

These conditions clearly required a stiff and solid boat but as well serious skills from the crew to adapt the watch between skipper and co skipper and always keep a focus on performance while having a conservative attitude to maintain all the equipment and bodies in good shape for the rest of the race.

The second J/99 Rum Rebellion had only been launched a few weeks before the event so the crew Shane Connelly and Graeme Dunlop had minimal time to prepare and practice.

It is this performance that gives the Rum Rebellion duo the great satisfaction of being at the finish line. Speaking with Shane after the race he commented: “Full credit to Jules and Jan on Disko Trooper-Contender Sailcloth for their tenacity and courage to stay out at sea on the first night.

“The conditions out there with the strong winds over current were appalling which was evidenced by the majority of retirements from yachts which stayed east.”

Rum Rebellion opted to head inshore to conserve themselves and the boat, but with dogged determination and great team effort managed to get back to third place by Iron Pot lighthouse on the approach to Hobart.

Their final test was the last 40nm leg into Hobart when the breeze completely died taking 15 hours to finish this leg. Unfortunately, they tore their large kite early on so were disadvantaged for the light air sections of the race plus the boats behind sailed in pressure so filled the gap quickly.

Shane commented: “The strength of the J/99 is that it is a great boat on all quarters – some boats are good upwind, down or reaching, but the J/99 strength is how it sails on all points of sail in all conditions.  For our budget, the J/99 offers really great design, rig, boom, sail size – everything is just right.  She’s an easy boat to sail, and easy to sail at 95% potential and hold it there – just a great fun boat.”

“The J/99 winning the Two-Handed trophy in all types of handicap illustrates the design choices made by J Composites. The objective has never been to seek the best rating in a specific system or the best performance under very specific conditions. The aim has been above all to deliver a sailboat that can easily achieve good performance for an amateur owner, in all conditions and all rating systems.

The Two-Handed Division could not compete for victory overall for reasons difficult to understand, but by making some comparisons the J/99 Two-Handed would have also gained an overall victory in ORCi and would have finished fourth in IRC overall behind two 52 footers and a 47 footer.

All this while being the only one of these four to have entered the final leg into Hobart at night and into dying breeze putting the nerves and stamina of the crew to the test to finish the last nine miles in four hours and 30 minutes at an average speed of two knots, finishing the 628nm at 3am.

The final point of satisfaction for J Composites is also the ability to demonstrate that with a contained budget, it is possible to win a great classic.

The J/99 Disko Trooper-Contender Sailcloth is a standard J/99 with bulb keel, single rudder as well as aluminium mast and boom. A little over a year ago we were in contact with Jules Hall to validate the relevance of this specification and thus their hope to perform in the Sydney Hobart; we can only thank them for their trust.

Their choice for the sails also fell on a technology adapted to boats of this size, they only used Contender Sailcloth panel sails insisting on their vision of obtaining the best level of performance with the most contained budget. All this together made it possible to create a completely coherent platform in terms of performance with a limited budget.

Plus, the J/99 offers the versatility for a family cruise around Hobart waters before sailing back home.

After this excellent transition in the year 2022 for J Composites, the year will continue to be rich for the J/99 with the tenth J/99 (so far) heading to Australia, and the desire to bring together more than ten J/99s at Spi Ouest France in order to sail in the fleet but also to compete in the most beautiful events of the year 2022: Mondial ORC crew, Mondial ORC Double, Giraglia Rolex Cup, Rolex Middle Sea Race.

A very busy program that we will not fail to share with you.