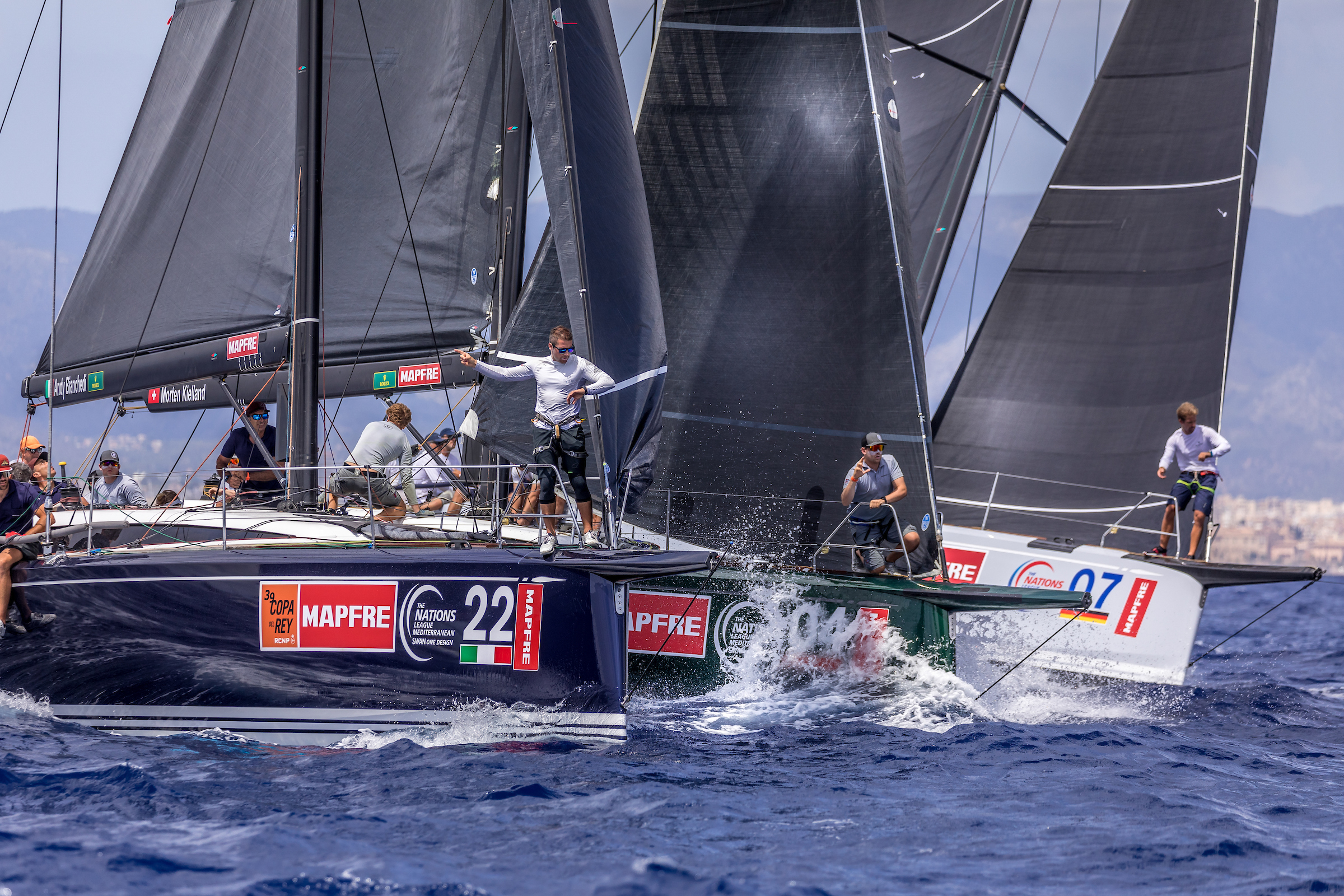 The Bay of Palma offered up typically perfect seabreeze conditions and warm sunshine to welcome back regatta racing for the 39 Copa del Rey MAPFRE to the renowned Balearic island race track.

In Sotheby’s IRC Class 1 the two TP52 crews which race on the 52 Super Series dominated. Andy Soriano’s Alegre crew made the strongest possible start with two wins, both times ahead of Jean Luc Petithuguenin’s Paprec Recyclage.

The Alegre team took part in two week-long training sessions in June and July and it showed. Meanwhile the French are starting on the back foot after being forced to make five changes from their regular line up.

Alegre’s Italian bowman Matteo Augadro said, “We had good fun, it was a little windier than expected. Our first start was not great but the second was better. The French boat Paprec was always a threat and we could never relax but we managed to extend enough on both races, especially the second one.

“The other boats were a little further back and some seemed to have a few problems. We are very happy to get two wins especially as it is over 18 months since we last raced together in Cape Town. Our two training sessions helped and we feel confident for the rest of the season.”

“We had a bit of a difficult start but once we got going we had some good speed. With the five new guys it took just a bit of time to find our marks. Alegre is a fast boat but we were not too far behind,” said Paprec’s skipper Stéphane Neve.

The German flagged world champions of the ClubSwan 50 class, Marcus Brennecke’s Hatari, won both windward-leeward courses which were contested on the Bravo course where the thermal sea breeze was at its strongest, the wind accelerating round the high land of Cabo Blanco to the left of the racetrack.

Hatari were only really passed once during the two contests, by Stefan Heidenreich’s Onegroup during the first run of Race 2. With Jochen Schumann as tactician they led around the left hand mark (looking downwind) at the bottom of the first run but Hatari were able to pass again on the next upwind.

Hatari were in control of the class finishing the day five points up on the second placed Bronenosec 50 which has Vasco Vascotto calling tactics for owner-helm Polina Lyubomirova, and six clear of Ross Warburton’s British crew on Perhonen which has Ian Budgen as tactician.

“The left side of the course was favoured mostly, a typical Palma day really and we had super good starts both times. We started both times in the middle of the line with a very good lane and the boat is going pretty well. It was a very pleasant day. We are pretty happy with that for a start,” said Dirk de Ridder, Hatari’s America’s Cup winning mainsail trimmer.

In the ClubSwan 36 division the Gold Cup holders Giangiacomo Sirena’s G Spot came away with a 2, 1. Lorenzo Mondo’s Farstar won the first race of the regatta but were over the start line for the second heat forcing them to start the race at the back of the fleet.

Farstar’s main trimmer Simon Sivitz said, “We made four places near the end of the race and rescued a decent result but it was very disappointing after the first one. On the first race we got a good start and sailed nice race, leading all the way round from the left side of the course and after the first round we just covered the other boats a bit. The OCS was a bit stupid because we were in a nice, strong position on the line and went a tiny bit early. If we were not OCS we could have won.”

The Swan 45 Tengher of Alberto Magnani leads the hotly contested BMW ORC 1 class, in front of Aifos 500, the TP52 steered by King Felipe. Tengher won the first race while the King and the crew of Aifos won the second and are only two points behind the leaders.

Current class champions Estrella Damm opened with a 10th, the team of Luis Martinez Doreste struggling to learn their new XP50. But they soon got into the swing of things and recovered with a third place in the second race.

In BMW ORC 2 it is the Swan 42 of Javier Banderas Teatro Soho Caixabank which holds the early lead thanks to two wins. In BMW ORC 3 two second places for class champions Laplazza Assessors, the modified Sinergia 40, takes them to the top of the leader board.

Patricia Suarez’s crew from Vigo in the north of Spain are making the pace in the Sotheby’s Women’s Cup raced in J/80’s but they lead only on countback from Olatz Munoz Oritz’s San Sebastien crew.