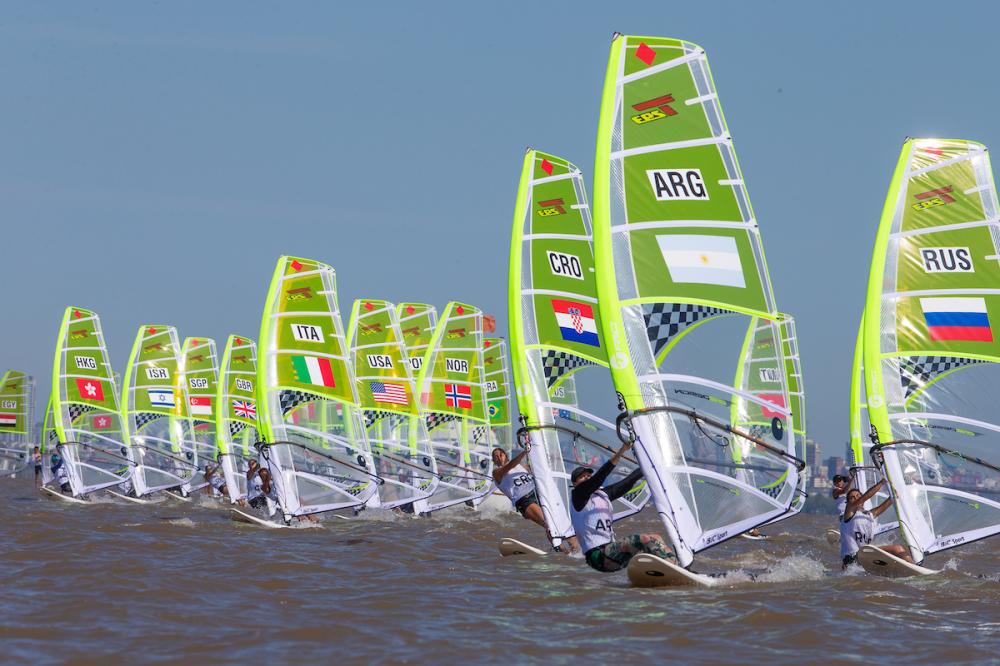 In light winds, Italian and Greek windsurfers took an early advantage on the first day of racing at the Youth Olympic Sailing Competition being held out of Club Nautico San Isidro, Buenos Aires, Argentina.

The Girl’s and Boy’s Windsurfing fleets were first up at the Games, starting one day ahead of Boy’s and Girl’s Kiteboarding and the Mixed Nacra 15 fleet, all of which begin competing tomorrow.

But initial light winds across the racing area meant that the opening races of the competition were delayed, before Day 1 wrapped up early with only two out of three races sailed.

The Girl’s fleet were first to compete – their opening race began at 14:38 rather than 12:00 as scheduled – and the status quo was quickly established, with the same athletes finishing amongst the top three in both races.

Youth Sailing World Championships bronze medallist Giorgia Speciale (ITA) took an early lead with two wins out of two, and the Italian is keen to avoid complacency over the next week.

“It’s a difficult course because it’s very shifty and you have to think a lot,” she said. “I had a good two races but they are only the first two – we have another 11 to go.

“There are a lot of good windsurfers in this fleet – for example, Russia, France, Greece and Israel – so it’s going to be a difficult challenge. I have to be focused on my goal and I will try to stay consistent for the rest of the week.”

“It was so hard because there was not much wind – it is difficult to sail in and we need to pump,” commented Pianazza. “I have made a very good start and I will try to keep this rhythm for the rest of the week.”

Australia's Hailey Lea is in 19th position, after recording 19th and 20th places in the two heats.

In the Boy’s Windsurfing fleet, Alexandros Kalpogiannakis (GRE) was equally dominant, winning both of his races. The 16-year-old has had a successful year of competition so far and is aiming to continue his good form in Buenos Aires.

“It was a good day for me with two firsts, but we have five days ahead, so I have to keep up my hard work to get a good result,” he said. “The conditions were very light and tricky. It was difficult because you had to pump all the way.

“2018 has been a good year for me – I took the qualification place for the Games, and also came second in the World Championships two months ago, so I would like to keep it up.”

A fourth and a second for Haoze Chen (CHN) puts him second, level on points with Italian Nicolo Renna who finished third in both races.

Alexander Lim (SGP) came second in Race 1 but a seventh-placed finish in Race 2 currently leaves him just outside the top three.

Racing continues at 12:00 local time on Monday 8 October, with Kiteboarding and the Nacra 15s sailing their first races of the competition.