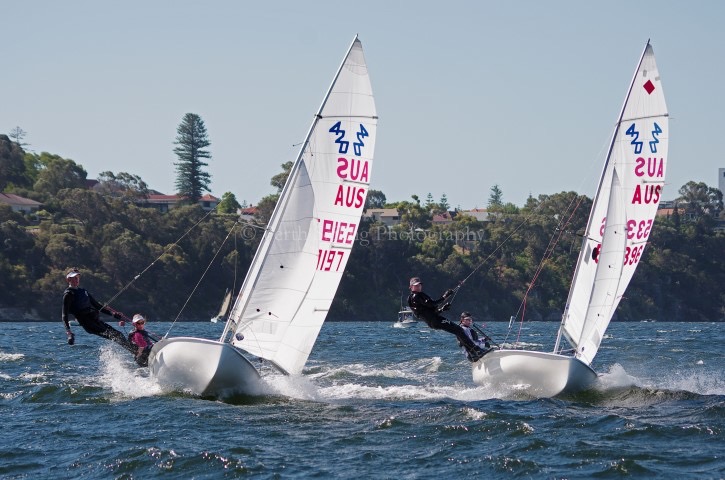 The international Classes Regatta (ICR) hosted by Royal Freshwater Bay Yacht Club in Perth has established itself as one of the premier dinghy regattas in Western Australia with 217 dinghy and skiff sailors battling it out on the waters of the Swan River over the weekend of 25 – 26 November.

It was a weekend of contrasts with the regular sea breeze building from a manageable 15 knots, to a gusty 20 – 25 knots by late afternoon on Saturday. Overnight, the breeze swung back into the East and dropped to drifting conditions for the first race on Sunday morning, before the sea breeze re-established itself for a full on afternoon blast. The majority of the sailors are young development crews looking to gain big fleet racing experience but the regatta is also an opportunity for the older hands to enjoy racing. There are also several crews made up of parents sailing with their young offspring enjoying superb early summer fleet racing.

Racing on two course areas, the 12 classes looked spectacular in Freshwater Bay with many parents and spectators watching from the clubhouse lawns. There were sailors from all over Perth as well as a group of 11 Optimist’s from Singapore.

Singapore coach Sherman Cheng says Perth is renowned for great sailing conditions in the summer and his team is keen to get some good training and racing in the strong winds. He was pleased with the conditions for his sailors at the 2017 ICR. Sherman comments:

“Today was a great day, light and shifty conditions in the first few races and towards the end of the second session we had 20 knots, gusting 23 knots. It was a fantastic opportunity for my sailors to be sailing against the WA sailors. I couldn’t ask for better conditions”.

Race Area 2 catered for the younger classes with the Optimist, O’pen BIC and Flying Ants. Race Officer Geoff Brown and his team ran six races on each race day with a variety of conditions ranging from 10 – 20 knots+.

In the Optimist Gold class there were mixed results with different winners in each race on Saturday. Consistency paid for the bronze medal winner from the 2017 SEA Games, Radiance Koh from Singapore, with a total of 22 points after 2 discards. She was followed by fellow Singaporean sailor Samuel Hung who squeezed out local sailor Toby Coote (SoPYC/FSC) on count back. Another Singaporean Faith Hailey Toh almost made it a (1,2,3) for the visitors, missing out by a single point.  Another young female sailor from South of Perth YC (SoPYC), Emma Nightingale recovered from a slow start to take out the Optimist Silver division.

O’pen BIC Gold was a straight shoot out between Will Drew (KBSC/RFBYC) and Rosie Hennessy (RFBYC/PDSC), both counting firsts and seconds all weekend. Will Drew won the regatta by a single point over 12 races.

Also on Race Area 2, the Flying Ant class came down to the last race, decided in favour of Eleanor Green and Daniel Bower of Fremantle SC (FSC)  from Liam Vause and Niamh Carter (FSC/MBSC) by a single point despite the latter crew winning the final three races.

At the end of racing, Race Officer Geoff Brown commented that conditions were at the top end of what he thought the sailors could cope with but he was impressed with the way they handled their boats. His team saw some very good starts, in general he thought is was pretty tough racing but is sure the sailors enjoyed it.

On Race Area 1, Race Officer John Taylor managed races for the Mirror, 420, 29er, Laser (4.7 / Radial & Standard) and Contender classes. His summary of the afternoon racing on day one:

“It was testing conditions for the sailors this afternoon with south-westerly winds averaging 20 knots and gusting to 25 knots. Most handled the conditions very well although we did see a lot of swimming”.

The stronger winds provided a great opportunity for local sailors to get some practice in before the forthcoming 420 World Championships, to be held close by on the open waters of Fremantle in early January. The ICR also acted as the class WA State Championships.

Under 19 sailors, Marcello Torre and Owen Ready from local club (RFBYC) really dominated the regatta with a total of 9 race wins from 12 races. They're only blip being two DNC results when they suffered damage in the last two strong wind races on Saturday. Joshua Pang and Liam Forrester (RFBYC/FSC) finished all races, never finishing lower than 5th, to seal second overall from Oliver Mavrick and Conall Hansford (FSC) in third.

The 29er class was a real contest between boys team Kieran Bucktin and Shannon Wright (RFBYC) and current Women’s world champion, Annabelle Davies and Maddy Woodward (RFBYC). Some of the reaches produced some top skiff speeds and the lead boats showed inspiring boat handling skills. The boys team dropped two 3rd places over the12 races, which was enough to hold off the world champion female crew by four points overall.  A little way back in third overall was Axel Fleet and Jack Luketina (RFBYC/SoPYC/FSC).

Single-handed sailors in the Contender class also revelled in the strong winds. The whole fleet are based at RFBYC and it was Clay Cook who won six of the ten races sailed from Simon Barwood in second overall.

The ever popular Mirror class attracted a number of families racing together. By far the best combo was Alex and Charlotte O’Beirne (RFBYC) who won nine of their 12 races. Peter and Rohan Dean (RFBYC) were the only team to beat them on the water winning the two light wind races. They finished a comfortable second from Michael Judge and Tyler Sprunt (RFBYC) in third.

The majority of classes managed to complete a full schedule of 12 races despite some quite challenging conditions. The standard of strong wind sailing skills was notably high and bodes well for the future of dinghy racing in the region with a number of major world championships scheduled to be hosted in Perth and Fremantle over the next few years.

By Jonny Fullerton with input from RFBYC