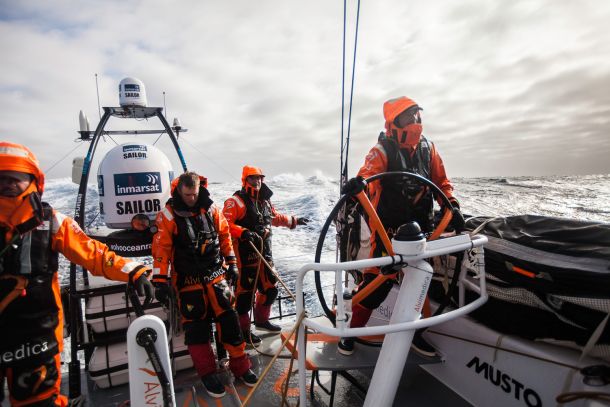 ALICANTE, SPAIN, March 29 – The Volvo Ocean Race fleet in the wild Southern Ocean was fighting two battles on Sunday – for bragging rights to lead the fleet round Cape Horn, and the race to win Leg 5. The first will be decided between Monday afternoon and evening and the other around April 5-6 in Itajaí, south-east Brazil, after three weeks of unprecedented, close-quarter racing.

The outcome of both contests is impossible to predict although the Turkey/USA crew of Team Alvimedica (Charlie Enright/USA) are currently narrow favourites as they led a group of five boats at 1240 UTC on Sunday. Should Enright’s crew achieve either, it would be a major achievement for a team that is the youngest in the race and led by a 30-year-old Volvo Ocean Race first-timer who first dreamed of entering a team on the film set of the Disney movie, Morning Light some eight years ago.

It is anyone’s to win.

To add to the plot, conditions in the Southern Ocean continue to be super testing with winds of some 45 miles an hour (73 kilometres an hour) and waves likely to approach 10 metres (30 feet). And the latest forecast promises no let up once the fleet has rounded the Horn and moved into the final stage of a thrilling leg up the Brazilian coast through the south Atlantic to Itajaí.

Enright gave a taste of the relentless pressure on board as his crew battled to stay ahead of the fleet and also steer through the worst of the weather. “I think everyone will remember today for the rest of their lives,” he reported in a message to shore after crossing ahead of Spanish rival MAPFRE, during a skirmish for the lead on Saturday. “It was completely insane – very little sleep, moving sails every hour. All the boats knew where you had to be to be ahead, but the problem is not everybody can be there at once. So it was a real fight.”

Enright will not be alone in remembering this leg for the rest of his life. The boats have avoided some huge icebergs on the route so far after Cyclone Pam kept them waiting three extra days in Auckland at the start and three of them crashed to their sides mid-week in so-called ‘Chinese gybes’.

Team SCA (Sam Davies/GBR), suffered the most serious damage with a broken fractional code zero (FRO) sail, which has hampered them significantly in such challenging conditions. At 1240 UTC, they trailed the main pack by just under 300nm. Navigator Libby Greenhalgh (GBR) described their experience on board in a blog from the boat on Sunday.

“Life on board is like being in a cold, damp car with no windows while someone is learning to drive, bunny-hopping down the road or practising their emergency stops,” she wrote. “When we hit a wave and the water ploughs over the top, it does so with such force that the water finds its way into the boat through every little nook and cranny. So much so that it felt like it was raining on us one day in the galley!”

The fleet has just passed the halfway mark of the race in terms of legs completed. In all, they will sail nine legs, visit 11 ports, and every continent. The event, staged once every three years, will conclude in Gothenburg, Sweden, on June 27.