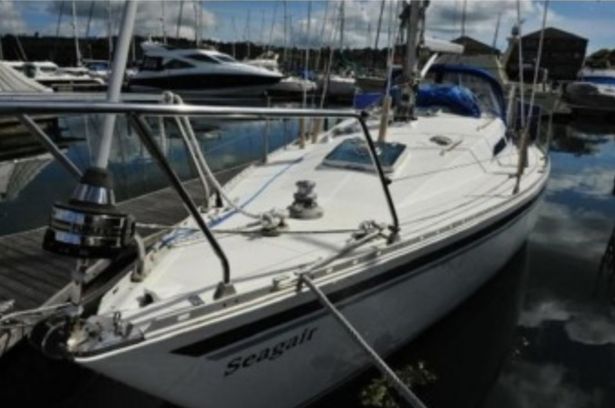 Wreckage of the yacht Seagair was found off Sennen Cove. Photo DevonLive.

The disappearance of a millionaire’s wife, who went missing while sailing from Cornwall to her home in North Devon, made international headlines in October 2012.

Now almost seven years later the inquest into the death of mother-of-four Ona ‘Mary’ Unwin will be held in Truro.

p:nth-of-type(2)”,”sizes”:[[8,8]],”hideOnSensitiveArticle”:true,”relativePos”:”after”,”additionalClass”:”in-article”,”name”:”div-gpt-ad-vip-slot”,”type”:”VIP”}” data-gpt-placeholder=”” data-response-start=”10455″ data-type=”gpt” data-requested=”20570″ data-google-query-id=”CNOB75jH1eACFZBKKwod7CQAxQ” data-timer-slot-rendered=”25032″ data-rendered-width=”8″ data-rendered-height=”8″ data-response-end=”31743″ data-viewable=”true”>
Three lifeboats, two helicopters, a plane, cliff rescue and 150 coastguard staff were involved in the search for Mrs Unwin whose wrecked yacht, Seagair, was recovered off Sennen Cove on October 15, 2012.
Aston Martin-driving Mrs Unwin, 65, remarried her ex-husband Carol just a week before she went missing after sailing from Mousehole.
She bought the 30ft yacht in Falmouth for £32,000 the day before and set off alone for the couple’s home in Bideford despite “treacherous” seas and not having sailed “for years”.

Jerry Hobkirk, who sold her the vessel, told the Daily Mirror at the time: “I was amazed when I found out that she had set sail. If I had known, I’d have stopped her.

It was reported by Yachting Monthly soon after his disappearance that Mrs Unwin had tried to engage a delivery skipper just hours before setting sail.

She was told six hours was not enough notice to find and organise a professional skipper.

Mrs Unwin, who it was reported was a millionairess, also set sail two days before a survey, which had been arranged for the Moody 31 yacht, could take place. This means she may well have been left uninsured.

Mrs Unwin was last seen at the anchorage at Mousehole. A lifeboat and helicopter search for her was called off following the discovery of wreckage.

Police said six months after her disappearance she was unlikely to be alive.

Det Con Martin Hearn, from Devon and Cornwall Police, said in 2013: “With the witness accounts that we've got of Mrs Unwin's sailing abilities, we would consider that she set sail while not having enough experience and, unfortunately, an accident is the most likely cause [of her death].”

The inquest will be held on March 7 at County Hall, Truro, and conducted by coroner Stephen Covell.