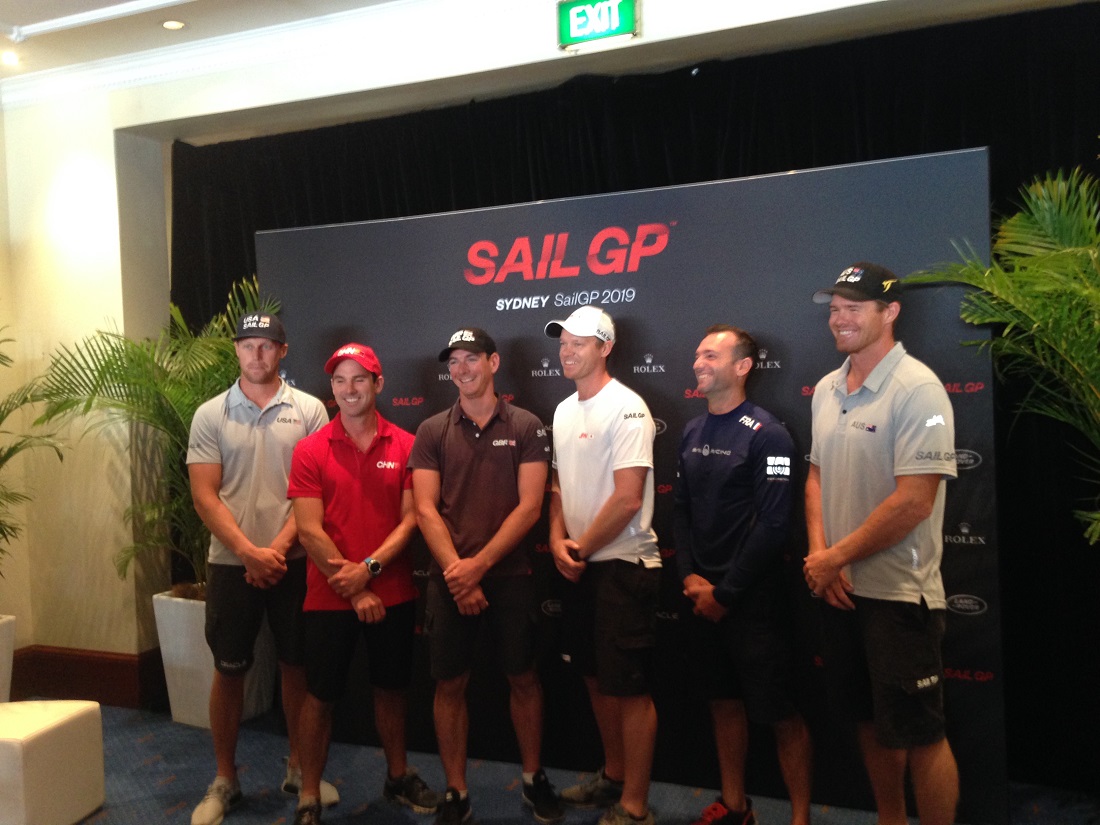 SailGP was launched at Royal Sydney Yacht Squadron this morning, ahead of two days of what should be spectacular racing between six boats and six nations, if the training sessions are anything to go by.

Sydney Harbour is set to host the inaugural SailGP series, which officially kicks off tomorrow from 4pm Sydney time and Saturday from 3pm. Today all six boats will be out for a practice session and all have been out at different times during the week, thrilling onlookers on the water and land.

The boat and series is the brainchild of Larry Ellison, an American businessman, entrepreneur, philanthropist and sailing enthusiast (he took line honours with Sayonara in the tragic 1998 Sydney Hobart) and America’s Cup sensation Sir Russell Coutts.

Coutts, a native of New Zealand, said at a press conference with the six skippers this morning “I am happy to see it all come to fruition after a lot of hard work. A lot of people have worked hard to make this happen.”

Coutts continued, “We couldn’t have picked a better venue for the first event.

The teams and their skippers are: Australia (Tom Slingsby), Japan (Nathan Outteridge), China (Phil Robertson), USA (Rome Kirby), France (Billy Besson) and UK (Dylan Fletcher) and Australians could be conflicted in who they barrack for.

The general consensus put’s the target firmly on the back of Japan’s Aussie skipper, Nathan Outteridge to win here in Sydney.

He responds: “I think all the guys here have incredible experience. It won’t be as easy as people make it out to be. The boats are incredibly challenging to sail – they are complicated. We also have a long way to go with our team.

“Although the Japanese guys are all known sailors, we’re still training them up and we’re still gelling as a team – including communicating with each other. We are using English as the common language – I don’t speak Japanese,” Outteridge said with a big grin.

Outteridge, though, is the only one of the six skipper to have helmed the America’s Cup foiling multihulls (for Artemis), while the others have been in the afterguard, giving the Aussie the upper hand in everyone’s eyes.

Slingsby, who like Outteridge hails from the NSW Central Coast, admitted: “This is a dream come true for me. I did the Olympics, then the America’s Cup; now I’m back representing Australia with a full Australian crew. It’s an incredible opportunity and I’m just going with the flow.”

Slingers agreed, “The boats are very challenging to sail, but very exciting. We’ve had a bit of practice, but everyone is still learning to sail them – they are tricky.

Asked if they had broken the 50 knot barrier yet, he said: “No. We got to 47 knots the other day, but ran out of runway. Foiling is very noisy – like a jet engine – but you get used to it.

Some people say it’s not real sailing, but it is. It’s just different. It’s very different to Laser sailing – a big difference between 5 knots and 50…”

Kiwi, Phil Robertson, a World Match Racing Tour winner, confessed: “It’s pretty daunting lining up on Sydney Harbour with these boats going at full speed. Sometimes when we’re crossing tacks, I don’t know if we are going to clear them or not…”

It prompted someone to ask if there were any spare boats.

“We’re building one as we speak,” Coutts responded to much laughter.

Robertson continued, “I’m packing it a bit – I think we all are.

“Nobody will be holding back, but I think everyone will be a little careful of each other,” he added, with a questioning look,” provoking more laughter.

On the US boat, America’s Cup winning tactician and VOR racer, Rome Kirby, has his challenges too. “We have the youngest team and none of us had sailed together before,” he commented.

Kirby, who with his father Jerry, are believed the only father/son to win the America’s Cup (separately), is also a gun Moth sailor. “The dynamics are the same, they both foil, but they’re completely different boats.

“It’s a smaller race track with the GP’s too. At times you are going so fast, you think, ‘slow down, you have to look after the boat’.

“I’d love to have another year’s practice with the boat and crew. Learning to race with each other and communicate, because you absolutely want the best team around you. You have to come in with a fresh outlook. It’s a steep learning curve,” ended Kirby, who hopes to be able to put in a good performance by the time the circuit reaches the US in May.

Established in 2018, and headquartered in London and San Francisco, SailGP is an annual, global sports championship featuring cutting-edge technology. Nothing like it has been seen on the Harbour before – or anywhere in the world, for that matter.

The series and boats were created to engage and excite global sports fans year-round in a supercharged, fast-paced version of sailing – on the water, on land or from home via television (Fox Sports, live in Australia) and any number of social media outlets. And with each boat fitted with three cameras and microphones, it will bring the action to audiences around the world.

To this end, Coutts comments: “We’ve been working hard on TV technology to capture the fantastic racing for audiences. We also launched the SailGP app a few days ago. We can get data of what’s happening on board. All the teams will have access to each other’s data, so there will be no secrets.”