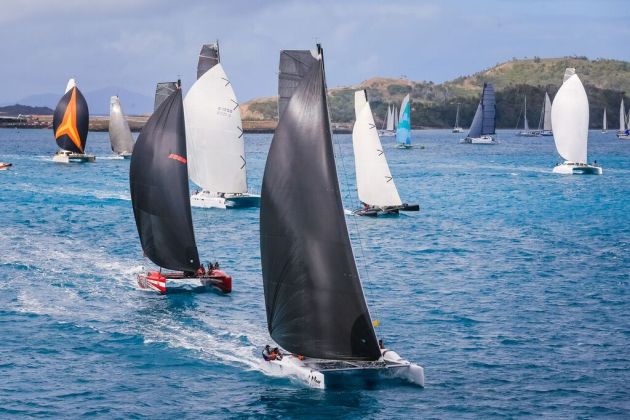 With Hamilton Island’s airport in the background

This will be the first time that the sport’s governing body, Yachting Australia, has been the coordinator for a major championship for large multihulls.

“It is an honour for us; a fitting tribute to what is the 33rd staging of Audi Hamilton Island Race Week, that Yachting Australia has nominated the regatta as the venue for the staging of the Australian Multihull Championship,” said Hamilton Island’s CEO, Olympic and world championship winning sailor, Glenn Bourke. “The event will sit well alongside the three major keelboat Australian championships that will also be decided at this year’s regatta.”

Glenn Bourke went on to say he was certain Race Week would once again deliver the highest standard of racing as well as the ultimate onshore party atmosphere for everyone who is on-island for the event, which will be staged from August 20 to 27.
Announcing multihulls would become part of the Australian Yachting Championship, Yachting Australia President, Matt Allen, said: “Multihull racing is a huge growth area for the sport and we’re pleased to introduce a Multihull Racing Class as part of our premier offshore championship.

“There’s no better place than Hamilton Island to kick this off. Sailing in the Whitsundays always provides variable conditions, challenging courses and the opportunity for great racing, so I’m sure the multihulls will enjoy the experience.
“Hamilton Island Race Week is a great occasion on and off the water, and with the addition of the multihulls in the Australian Yachting Championship, it will be extra special this year.”

Race Week’s highly regarded Race Director, Denis Thompson, advised that there will be a wide range of courses set to decide the multihull championship. He said the majority of races over the six days of competition will be passage courses that weave around the magnificent islands in the tropical Whitsunday group.

The Notice of Race and entry form for Audi Hamilton Island race Week 2016 are now posted on the Race Week website, www.hamiltonislandraceweek.com.au. The regatta caters for a wide range of sailboats: from sportboats and trailer sailers through to Grand Prix level keelboats, maxi yachts, cruising yachts of all sizes and configuration, and multihulls.